PERHAPS the last time the Danube River received this much media attention was in 2002, when it flooded several sections of the south-west region of Slovakia, causing massive damage. On June 6, around noon, the Danube exceeded its 2002 levels, as well as the expectations of hydro-meteorologists, reaching 1,030 centimetres. 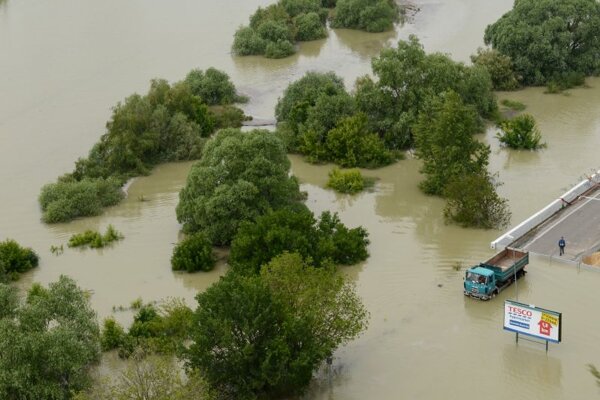 PERHAPS the last time the Danube River received this much media attention was in 2002, when it flooded several sections of the south-west region of Slovakia, causing massive damage. On June 6, around noon, the Danube exceeded its 2002 levels, as well as the expectations of hydro-meteorologists, reaching 1,030 centimetres.

The swollen river has so far not claimed any victims, and an unidentified body found at the Gabčíkovo dam was deemed not to have been related to the flooding, according to rescuers.
Nevertheless, several families from Bratislava’s Devín borough had to be evacuated due to the rising water levels, as well as students from a dormitory in another part of Bratislava, where a state of emergency was announced on June 4.

Despite the water rising to once-in-100-year levels, as well as exceeding the heights seen in 2002, the authorities said the damage in the capital would not be as great as it was 11 years ago, partly owing to a new flood-prevention system costing nearly €33 million which includes modular flood barriers.

The Danube has already exceeded 10 metres, but there will still be some space between the river’s surface and the top of the barricades, said Bratislava mayor Milan Ftáčnik, as reported by the public-service broadcaster Slovak Radio (SRo).

Prime Minister Robert Fico added that while Devín is prepared for the level the river reached 100 years ago, the city centre will be able to withstand water levels reached 1,000 years ago.

“We all hope that there will be no other circumstances that would surprise us, and that all assumptions we have been currently receiving will be [perceived in a way] that we will manage it,” Fico said, as quoted by the TASR newswire, adding that it will be “by a hair’s breadth”.

According to Pavla Pekárová from the Hydrological Institute of the Slovak Academy of Sciences (SAV), though the flow of the water is higher than it was in 2002, mostly because of a better sealed river-basin in the section of the Danube near Vienna, she does not expect it to cause problems in Slovakia.

“I think the problems will be bigger in Hungarian territories, since if the [flood] wave passes through Slovakia without breaking the dams, the whole volume of water will go to Budapest and then further down,” Pekárová told SRo.

Peter Pišút from the department of physical geography of the Comenius University in Bratislava believes that Slovakia might encounter problems if the water level drops at a slower rate, which he explained to SRo would cause the flood barricades to leak.

The rising level of the Danube had the worst impact on several boroughs of Bratislava. The most affected was Devín, where the water level reached 970 centimetres on June 6. Police closed the main road into the city centre due to flooding, and the only form of transport was arranged by army vehicles.

Another borough affected by flooding was Petržalka, which was struck on June 3. In the first few days the Danube flooded all of Tyršovo Nábrežie, as well as the adjoining park and woods along the riverbank. Representatives of the city borough were prepared to evacuate the inhabitants of three streets, the Sme daily wrote.

The borough of Karlova Ves also faced problems after water breached the barricades and flooded a hangar, a gym and a water-sports club, as well as the local boathouse. Water also seeped into the lower sections of the Botanical Garden, which belongs to Comenius University, the SITA newswire reported. As a result, about 100 students had to vacate dormitories located near the garden on June 6.

In the Old Town city district the police closed the embankments between the Old Bridge and SNP Bridge, and between the Lafranconi Bridge and the PKO cultural facility, which is closest to the water. Police explained to SRo that this was because people were standing on the flood barricades, potentially damaging them. Police later closed the Old Bridge, on which a large number of onlookers had gathered to watch the Danube rise.

Several schools in this part of the city were also closed on June 6, TASR reported.

The increasing level of the Little Danube, a branch of the Danube River, resulted in the evacuation of people from Vlčie Hrdlo, located in Ružinov. The floods struck mostly gardens which are not permanently inhabited, SITA wrote.

Fire brigades from the regions across Slovakia were monitoring the situation in all three regions endangered by floods: Bratislava, Trnava and Nitra. Soldiers were also ready to help.

River transport was halted on June 3 and several ships had to remain in Bratislava’s port. Jana Vadkertyová, spokesperson for the State Navigation Administration, could not say when river transport would resume. Meanwhile, Slovak Shipping and Ports, which handles freight transport, announced that damage to property might reach €500,000, while the lost profits from the halting of transport could come to €1.5 million, SITA reported.

Several homes were without electricity on June 6 after three power distribution units in Bratislava had to be turned off because of flooding, Jana Pohánková from the press department of the Západoslovenská Distribučná company told SITA.

She added that the distribution units in Kližská Nemá and Patince, both in the Komárno district, and in Gabčíkovo in the Dunajská Streda district also had to be shut down.

Other parts of Slovakia also affected

In addition to Bratislava, other towns and villages located near the Danube also prepared for rising water levels, which were expected to strike the area on June 8 and 9. The most endangered sites were Gabčíkovo, Medveďov, Komárno and Štúrovo. Because of the risk of flooding, several roads in Bratislava, Trnava and Nitra Regions were closed, and the police imposed several restrictions for areas close to the Danube.

Because of the rising water level of the Morava River, people from Devínska Nová Ves were forced to protect their homes with sandbags. Dušan Dvoran, mayor of Vysoká pri Morave, which is also located by the river, was even considering evacuating its inhabitants since the majority of the village was flooded, SRo reported.

The floods could result in changes to the rules about when it is appropriate to call for rescuers when it becomes known that a certain area will be hit by a natural catastrophe, with the aim of being as well-prepared as possible against the potential consequences of the disaster, Interior Minister Robert Kaliňák said on June 5. Currently, the steps taken by rescue forces are connected to the individual degrees of flood warnings.

“Regarding the exchange of information we have today, we assume that it will be necessary to make the changes also in order to send for more forces during the preparation [for the disaster] in the near future,” Kaliňák said, as quoted by SITA, when visiting Devín, in which he coordinated the activities of rescuers.

The minister explained that under the new rules it will be possible to prepare for the catastrophe as soon as information about an increase in the level of rivers is received.