THE WORKS of German composer Richard Wagner are widely considered to be demanding and difficult by performers and audiences alike. It has been nearly two decades since the Slovak National Theatre (SND) in Bratislava last performed one of his operas, but on the occasion of the composer’s 200th anniversary, it has decided to stage one of his earlier works, Lohengrin. 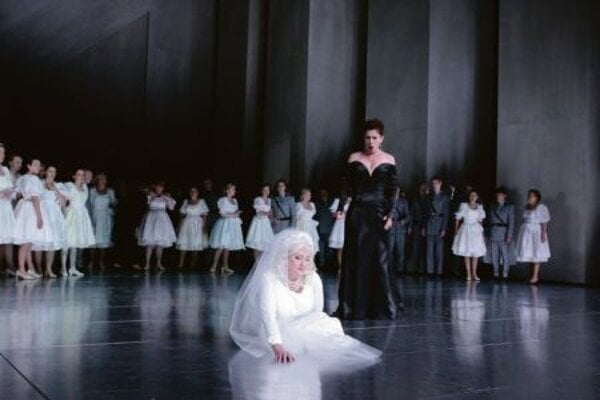 Elsa and Ortrud, the Good and the Evil. (Source: Anton Sládek)
Font size:A-|A+

THE WORKS of German composer Richard Wagner are widely considered to be demanding and difficult by performers and audiences alike. It has been nearly two decades since the Slovak National Theatre (SND) in Bratislava last performed one of his operas, but on the occasion of the composer’s 200th anniversary, it has decided to stage one of his earlier works, Lohengrin.

“Lohengrin is still an early Wagner,” conductor of the piece and head of the SND’s opera section Friedrich Haider said at a press conference. “To a certain extent, he establishes his own system of leitmotif, of being epic (there are only traces of arias), but when singing is concerned, he is still connected to Italian bel canto. Wagner was a big admirer of (Italian classical composer) Bellini, of the pure melody. And here you have also the beginning of the ‘eternal melody’, i.e. there are almost never-ending lines – but naturally, beautifully bound together.” Haider also added that Lohengrin is one of Wagner’s shorter operas.

The current Bratislava staging, which premiered on May 24, is a co-production with the opera house in Vilnius, where the production first premiered in March 2013. It was directed by Latvian Andrejs Žagars, and part of the production team is Latvian.

In addition to Slovak soloists (Peter Mikuláš, Jozef Benci, Miroslav Dvorský, Jolana Fogašová, Adriana Kohútková and Denisa Hama-rová, among others), German tenor Ferdinand von Bothmer (Lohengrin) and Swiss mezzo-soprano Mona Somm (Ortrud) are also part of the cast. It seems that – and maybe this is a rule rather than an exception – the villains are even more flexible, vibrant and convincing in their dramatic expression.

“The score is a milestone in musical history – starting already with the overture which begins with four bars only - A Major, which goes through [each of] the instruments in the orchestra [in succession],” Haider said. “This is an invention of romantic sound timbre, which makes it a hard piece for the orchestra.”

The SND’s production modernises Wagner’s famous story of a knight who is connected to the Holy Grail and who comes to help people in dire situations. Instead of a knight in armour who arrives in a boat pulled by a swan, the main hero jumps with a parachute in a non-descript military uniform. Director Žagars said that the story is set in the year 1940, when WWII was already underway - but it is not shown graphically, and it is not set in any specific country, leaving room for the audience’s imagination. (However, the difficult German language along with shouts of “Sieg Heil!”, which have later tarnished the opera’s reputation, might influence the audience’s perception to a certain extent.)

Thus, Žagars’ Lohengrin, though relatively contemporary and done in a neutral setting with retro-costumes, does not provoke an extreme emotional response. Audiences can therefore concentrate on the plot, and especially on the great music, the most famous part of which is arguably the “Bridal Chorus” wedding march from the third act – familiar even to those who are not opera enthusiasts – which is the most commonly played piece of music in weddings worldwide. (It is worth mentioning, however, that in the opera it is sung immediately after the ceremony and before the final marital conflict and split during the wedding night.)

Lohengrin will be performed on June 15 in the new building, and will resume the following season after the summer break. The opera starts at 18:00 (as opposed to the more standard 19:00) as it lasts for four hours, including two intermissions. In the foyer, visitors can also admire a photo exhibition of stagings of Richard Wagner’s works in Slovakia, marking the anniversary of the controversial composer who is adored by some and disliked by others, but whose impact on operatic and musical history is undeniable. Updated information can be found at www.snd.sk.