THOUGH Defence Minister Martin Glváč has been at pains to persuade the public that the suspicions of large-scale embezzlement of state funds via the country’s military intelligence agencies during the first government of Robert Fico (2006-2010) were only a “dangerous media hoax”, new claims of misconduct keep emerging. 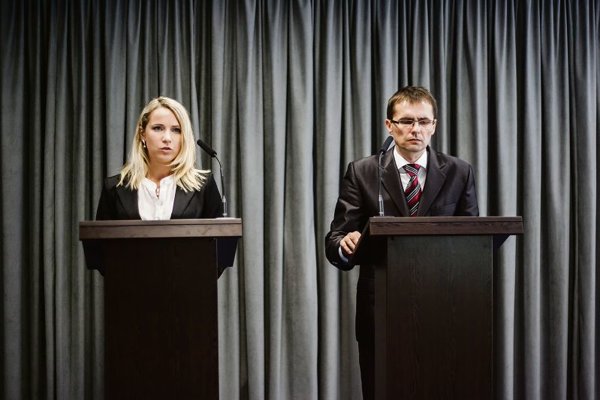 THOUGH Defence Minister Martin Glváč has been at pains to persuade the public that the suspicions of large-scale embezzlement of state funds via the country’s military intelligence agencies during the first government of Robert Fico (2006-2010) were only a “dangerous media hoax”, new claims of misconduct keep emerging.

Most recently, a former Military Intelligence Service (VSS) officer has spoken out, telling the media that she was subjected to bullying in relation to the claims of embezzlement.

Katarína Svrčeková, who identified herself as a close friend of former VSS boss Roman Mikulec, the officer who originally started the inquiries into the embezzlement case, spoke out only a couple of days after the Sme daily reported on a newly emerged file implying that a senior military intelligence official was investigated over suspicions of abuse of power.
File: Power abuse suspected

Sme reporters anonymously received a copy of the file, on an investigation into Robert Tibenský, the current deputy director of the merged Military Intelligence (VS) agency; they reported on it on June 12. The file, which is six pages long and dated February 8, 2010, alleges that Tibenský abused his powers in 2004-2008, when he made arrangements to rent four apartments, office space and a garage, which were to be used by the intelligence service, but which he eventually used for his personal benefit, Sme reported.

With the exception of one flat (located in the north of Slovakia), all of the property in question was located in Bratislava, and the final sum that Tibenský allegedly embezzled in this manner amounted to the equivalent of over €66,000, according to Sme.

The copy of the document that the daily received was addressed to the 2007-2010 head of the Military Intelligence Service (VSS), Juraj Šebo.

Since then, the military intelligence services have been restructured, and the two bodies, VSS and the Military Defence Intelligence (VOS) counter-intelligence agency, were joined into one organisation, the VS.

Glváč said he had not seen the Tibenský file, but stated that it might involve a case that has already been investigated and which uncovered nothing to confirm the suspicions, Sme reported on June 12.

“According to my knowledge there was such a file in the archive,” Glváč said as quoted by Sme. “Today we know who the only one was who was able to handle it, so [this is a case of] intelligence agency games.”

The Nový Čas tabloid daily published information about a similar file several months ago, but did not name the person whom it was supposed to concern, Sme noted.

Sme broke the first story on embezzlement suspicions, citing an anonymous 134-page file leaked from the military intelligence agencies, on May 16. The report contains information about alleged fraud pertaining to 15 expensive residential properties in Bratislava, as well as cars, which supposedly ended up in the personal ownership of VSS officers and their relatives.

Both of the then directors of the two military intelligence agencies – Juraj Šebo of the VSS and Ľubomír Skuhra of the VOS – allegedly knew about the transactions. The merged VS is now led by Skuhra, Sme reported.

On May 25 Glváč went so far as to assert that it is “provable” that no embezzlement ever took place. The defence minister based his statement on an inquiry into the leaked report, which Sme has since passed on to the special prosecutor’s office and the parliamentary oversight committee.

In addition, the Defence Ministry said it was ready to file criminal complaints against those who it said leaked classified information. In this connection it named Galko, Mikulec and Suchodolinský, the SITA newswire reported.

In late May, Mikulec said he was concerned that important documentation pointing to embezzlement was being shredded by the military intelligence agency.

Parliament is expected to hold an extraordinary session devoted to the situation in the military intelligence services.

Glváč promised to lift the oath of confidentiality for anyone whom the investigators might need to hear from. None of the secret service agents have been heard so far, according to the minister, Sme wrote.

The file was created when the VSS was led by Mikulec, and was shredded on his orders. Mikulec now says that he took the move in order to prevent “handling the material in question in a way which would have thwarted the use of all evidence in the investigation of the whole case by competent bodies”, Sme wrote.

According to Mikulec, since the suspicions were first publicised by Sme nothing had happened at the VS apart from “evidence being destroyed”. He also alleged that new documents are now being produced. However, Glváč on May 28 compared such claims to stories in a satirical magazine, SITA reported.

“I am feeling immense fear which keeps intensifying,” said former intelligence officer Katarína Svrčeková on June 13, as quoted by SITA.

Svrčeková claimed that she has been subjected to bullying, harsh pressure and discrimination by people who were trying to find something compromising against her friend Mikulec.

Svrčeková said she notified Tibenský, the current deputy director of VS, head of the Slovak Army Peter Vojtek as well as Glváč himself about the situation. But, according to Svrčeková, she did not get a sympathetic hearing and was transferred to a combat unit in Trebišov, Sme reported.

Svrčeková, who was introduced to the public by former defence minister Ľubomír Galko, claims that after the change in the management of military intelligence after the 2012 election she was subjected to bullying, threats and discrimination, according to SITA. Svrčeková claims to have undergone four humiliating security interviews during which her investigators addressed her in vulgar terms.

When she wanted to submit a complaint, she said that Tibenský promised her a position in military intelligence in return for changing her mind. She said that she refused, according to SITA.

Svrčeková said that when she wanted to quit the army she was not allowed to do so. Finally Svrčeková asked to have her security clearance withdrawn hoping that this would result in her dismissal, which did not happen either, she said, as reported by SITA.

Galko has drawn the conclusion from Svrčeková’s story that minister Glváč does not have his intelligence service under control, Sme reported.

However, Glváč claims that this whole case is a consequence of personnel nominations done by Galko back in 2010.

“This is the result of his bad personnel nominations, which were presented also at particular oversight committees where he nominated people who did not have security clearances and subsequently people whom he met at restaurants as he presented it in his conversations,” Glváč said, as quoted by SITA.

The VS has claimed that security interviews of Svrčeková were conducted in line with the law on classified information, SITA reported.