THE RITUAL opening of the summer tourism and hiking season in the High Tatras for the first time was composed of a series of free events spanning three days and multiple venues. 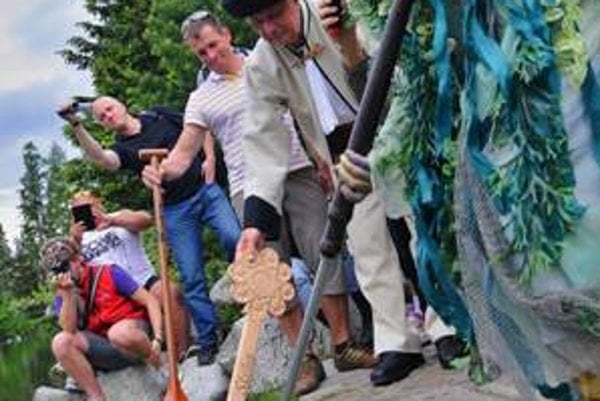 THE RITUAL opening of the summer tourism and hiking season in the High Tatras for the first time was composed of a series of free events spanning three days and multiple venues.

At Popradské pleso mountain lake, the 2013 tourism season was traditionally opened with the turning of an iron key that had just been fished out of the lake by divers. “Today, on June 15, the season is open – as well as the hiking paths in the Tatras National Park,” Juraj Kalman, head of the tourism chalet at Popradské pleso told the TASR newswire. “They were symbolically opened with the key that had been deposited on the bottom of the lake at the end of last season which will hang in the chalet during the 2013 season,” adding that the key will be returned to the bottom of the lake again this autumn.

The event was accompanied by music by Gorals, a group of people living along southern Poland, northern Slovakia and in the Silesian region of the Czech Republic who are part of a continuum of Carpathian Slavic highlander groups. There was a programme for children along with homemade delicacies after a pig-killing. “We had a classic, home-style pig-killing feast,” Kalman stated. “Visitors were offered various types of sausages as well as brawn – so gourmets were satisfied, too.” The chalet manager said that this type of gastronomy is typical for the chalet. “We do not serve Chinese food here or spaghetti, canned or deep-frozen food. We only cook traditional meals – thick sauces, mutton and deer and our own dumplings and pies – simply the meals that people in the Tatras have always looked for and found.”

The SITA newswire wrote that more than 7,000 people visited the opening ceremonies. The CEO of the High Tatras regional tourism organization, Lenka Maťašovksá, said “the new synonym for opening of the season is not just making the mountain valleys open to hikers but a three-day, open-air festival comprising fun, music and sport that was begun by the ritual unlocking of the boat season at Štrbské Pleso on June 14 and culminated on June 16 with the funny-costume race called Rupicapra in which tourism professionals competed”.

The Friday opening of the boating season at Śtrbské Pleso was attended by Olympic-winning kayaker Michal Martikán. A Saturday concert of the La Gioia group, which popularises the bel canto musical style, attracted about 700 people, “probably the most of all concerts organised so far within the Tatra Cultural Summer series”, Maťašovská said. At the spring of the Smokovecká kyselka mineral water, a ceremony was held on the 220th anniversary of the founding of the municipality of Starý Smokovec.

On Sunday there was a series of concerts and in the Rupicapra funny-costume race about 60 employees of the tourism sector competed wearing costumes such as old-time ski outfits or even as a pre-historic human. The winning team was Liptovské bobule – the Liptov Berries.

Maťašovská expressed hope that the grand opening of the season will be reflected also throughout its course and that it will be even more successful than 2012. She added that promotion of cycling is one of the key goals of the tourism office but noted that since the summer tourism season is very much dependent on weather, she hoped for as many sunny days as possible so that visitors are truly satisfied and leave with the idea of returning once again to the Tatras.