THOUGH regional groupings might make decision-making within the European Union complicated, the benefit they bring is the rationalisation and specialisation of their industries, according to Brooks Tigner, chief analyst and head of technical studies at Security Europe and a correspondent for Jane’s Defence Weekly. 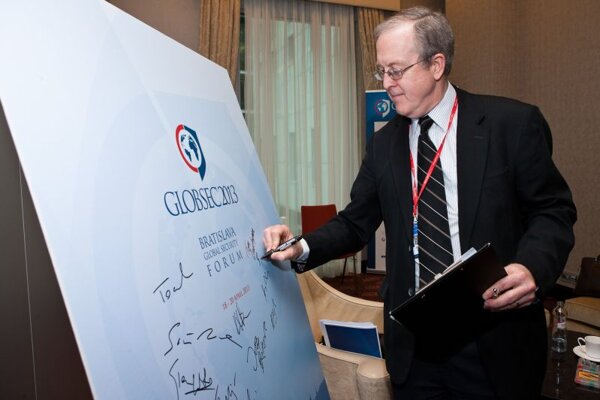 THOUGH regional groupings might make decision-making within the European Union complicated, the benefit they bring is the rationalisation and specialisation of their industries, according to Brooks Tigner, chief analyst and head of technical studies at Security Europe and a correspondent for Jane’s Defence Weekly.

The Slovak Spectator spoke with Tigner during the GLOBSEC Bratislava Global Security Forum in April about the challenges of home and foreign security policies, the importance of regional groupings within the EU and how the economic crisis has affected security policies.

The Slovak Spectator (TSS): What are the current challenges for the European Union’s internal security policies?
Brooks Tigner (BT): Probably one of their main priorities is the security of maritime surveillance and the security of external land borders. The EU right now is split into separate navies and coast guards. We have seen the problems the EU has had with illegal immigrants. It is politically a very sensitive subject because they do not want to be seen capturing overloaded Nigerians on the boat and sending them back to Africa. They are addressing the maritime issues first, but perhaps the more difficult one will be the eastern land borders going from the Baltics, all the way across Poland, Poland’s border with Ukraine, and then down to Greece. They have not developed an efficient way to do this.

Another one I would suggest is how to deal with the data protection sensitivities of surveillance. We are going to be an increasingly surveyed society, lots of cameras, lots of abilities to listen to the internet. How do we maintain data privacy and data protection?

TSS: And what external security challenges does the EU face?
BT: The most acute problems are all related to sovereignty and whether member states want to give up more of their sovereignty in the field of defence. Right now they do not. They are finding themselves increasingly incapable of launching military missions, or even to launch them quickly when they do, because they have not ceded sovereignty in the area of defence. And as we saw in Mali, it took one nation to provoke a reaction from the EU – that was France.

Ideally, the EU should have sent one of its battle groups down to Mali to do the protection work for the military trainers. Instead, they put together a big mission with the security component within it. If any situation would have lent itself to deployment of the battle groups, Mali would have been it. But we did not see it. So the big policy challenge there is: one, how to create a more muscular Common Security and Defence Policy (CSDP), which they have been talking about for years. They have to start pooling real money together, they have got to agree to pool and share assets between the member states. And they have to agree that they will accept the industrial rationalisation that this will lead to. But right now no one wants to lose. They all want pooling and sharing, but they want someone else to suffer the cost.

TSS: How do you assess the role of the Visegrad Group (V4) in the EU common security and defence policy?
BT: The value [of what the V4 is doing in the area of security and defence] is probably in the lobbying they can do in Brussels. It is always better to speak with four voices than one, even if it is small and medium-sized countries compared to Germany or the UK. If they can somehow more accurately prove they have created a more integrated security and policy area among the four countries, like the Nordics are doing, then it would be a model for other EU countries to do the same and it should also increase their political voice within debates at the council of ministries in Brussels.

TSS: In addition to the V4, you mentioned that the Nordic countries cooperate with each other in the area of defence. Do you think it is important to create these small groups within the EU?
BT: It would be a good thing for regional cooperation [to have] these regional groupings to take place. We have the European Defence Agency which has a security of supply declaration, but it is a political declaration. It does not oblige the member states to do it, they only promise to do it.

So if more of these regional groupings are developed, it raises a security supply question and it also points to an interesting industrial question. And that is: Should each country specialise? Why should Poland produce everything? Why should Hungary which does not have the money produce tanks and aeroplanes and bullets? It would make far more sense a few years from now if the V4 continue to go ahead, to continue to progress in the defence field. These are extremely difficult questions, politically. But in the long run, it would create a stronger V4, just as it would create a stronger Nordic grouping as well. Because all attempts at doing this at the European level have been moving at a glacial pace. For 25 years they have been talking about the need to rationalise Europe’s defence industry, and they have done very little about it.

Aside from that you really only have the hard choice of rationalisation. This is a political decision, very hard to do. But there is a risk in all of this, the risk of severely declining defence spending – that European defence industry is going to start looking more towards foreign markets. They are going to sell their weapons to India and to China, if they have permission. The risk is that the technology will be transferred, the know-how, the expertise will be transferred to these countries, and then 10 years later they will be sending the same things back to Europe more cheaply than Europeans can produce them.

TSS: How has EU foreign policy handled challenges associated with the Arab Spring?
BT: Not very well. This should have been the moment for the EU to assign the lead for the Libyan operation. Unfortunately, European action service was still getting its feet on the ground. It was in no position to take charge politically, plus the planning capabilities of the EU military staff were overwhelmed by the scale of the military response needed over the skies of Libya. They did not have enough planners. They did not have the air tactical, people to make air assignments. They had relied on NATO.

What the EU was good at during Libya was evacuating the citizens, and then the navies were there. But that was a subsidiary operation. The main operation was the no-fly zone, the sea embargo which EU navies were involved in, and the attacks against the Gaddafi regime. That was done mainly by NATO.

TSS: Is EU foreign policy effective in terms of communication with oppressive regimes or in applying sanctions on countries that violate fundamental human rights?
BT: Yes, they are good at applying sanctions. They are getting better at it because they are applying sanctions now much more quickly than they used to in the past. And the EU is very good at giving the consistent political message to dictators and on human rights, without being too aggressive because they are too afraid of terrorist attacks in Europe. I see that the EU is very careful not to provoke anger in the Islamic world. Whereas America tends to say “this is bad, this is good”, and “we are coming after you”, the EU never says that.