THE FESTIVAL Konvergencie (Convergences), founded by Slovak cellist Jozef Lupták, offers in its 14th year a series of events featuring more than just traditional chamber music, but also fusions with jazz, rock, and even the compositions of Leonard Cohen. 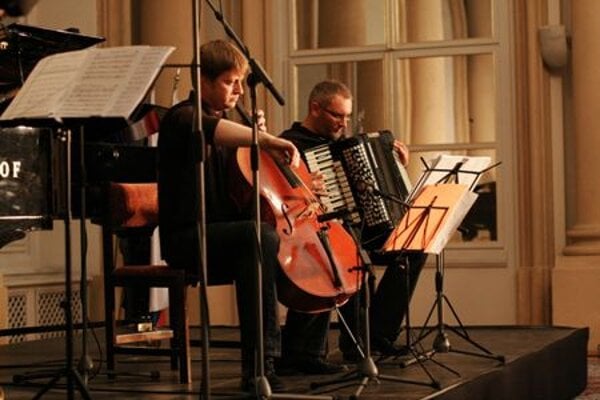 THE FESTIVAL Konvergencie (Convergences), founded by Slovak cellist Jozef Lupták, offers in its 14th year a series of events featuring more than just traditional chamber music, but also fusions with jazz, rock, and even the compositions of Leonard Cohen.

The 11 concerts in Bratislava will offer a host of domestic and foreign performers, an event for children, a photo exhibition of double-bass player Róbert Ragan, and an open-air concert devoted to the memory of legendary rock musician and writer Dežo Ursiny.

“There are a few new things this year,” Lupták told The Slovak Spectator. “The festival both begins and ends in St Martin’s Cathedral. Unlike last year, which brought solo recitals (which we hadn’t done before at Convergences), this year we instead focused on a dialogue between musicians, so most of the concerts are duets. One evening is dedicated entirely to duets, and this can also be seen in the rest of programme, for example in the Bratislava Night of Chamber Music.”

Lupták added that another theme in this year’s festival is singing, which is featured throughout the festival, from the first evening, through the concert for children and the concert commemorating the late Dežo Ursiny, to the final performance, which is a very unique adaptation and combination f Baroque music and the work of contemporary musicians.

The opening show, called Svjati, offers sacral music by Gavin Bryars, John Tavener, Peter Zagar, Vladimír Godár, as well as old masters Henry Purcell and William Byrd, as performed by the Ensemble Corund and Slovak musicians. The closing show, called If Grief Could Wait, will feature Norwegian singer Susanna Wallumrod and Swiss harpist Giovanna Pessi adapting songs by Leonard Cohen, Henry Purcell and Nick Drake. “Both these concerts will bring what this fast-paced contemporary society and our lives miss most: to be absorbed by the music, quiet reflection, the beauty of sound, melody and exceptional interpretation; with both concerts promising a unique artistic and spiritual experience,” Lupták summed up. “And the events in between represent modern art and life: the exhibition, the duets – each quite different, jazz, rock, improvisation, etc. and the marathon on the night of chamber music brings a whole lot of musical gems. And the tribute to Dežo Ursiny is my dream come true; I have long desired to commemorate the musician and poet whose works I grew up listening to.”

What: Convergences chamber
music festival
When: September 15-22
Where: Design Factory, St
Martin’s Cathedral in Bratislava
For more information, visit
the konvergencie.sk website (in
Slovak and English).