A VERDICT that cleared the way for the retrial of Baki Sadiki, a Kosovar Albanian living in Slovakia convicted on major drug charges, is prompting serious questions about the circumstances surrounding his extradition from Kosovo to Slovakia. 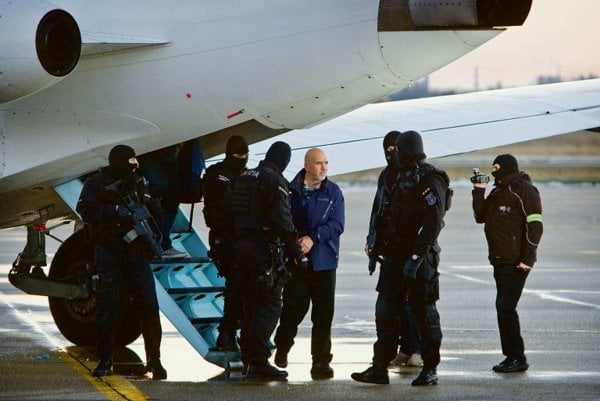 A VERDICT that cleared the way for the retrial of Baki Sadiki, a Kosovar Albanian living in Slovakia convicted on major drug charges, is prompting serious questions about the circumstances surrounding his extradition from Kosovo to Slovakia.

The Prešov Regional Court cancelled the original verdict sentencing Sadiki, suspected of smuggling heroin from Turkey to Slovakia hidden in imported beach sandals, in absentia to 22 years in prison on September 3, thus reopening his trial. Sadiki was extradited from Kosovo, where the suspected drug lord had been hiding, to Slovakia last December. While the court suggested that a new trial was one of the conditions set by Kosovo for the extradition of Sadiki, the Slovak Justice Ministry has denied agreeing to any such condition.

The Sme daily on September 11 reported that the right to a retrial influenced Kosovo’s decision to extradite to Slovakia, but noted that it is not being mentioned in official paperwork under the conditions under which the country extradited Sadiki. The Justice Ministry provided the document to Sme based on the Freedom of Information Act.

Meanwhile, Justice Minister Tomáš Borec said on September 11 that he is considering a special appeal against the verdict of the court, the only tool the minister has to intervene.

“The justice minister has no other legal means at his disposal at this moment,” Borec said, as quoted by the SITA newswire.

He said he will wait to read the ruling of the Prešov Regional Court before commenting further.

“The regional court in Prešov annulled the ruling of the Prešov District Court vis-a-vis the re-opening of the proceeding with Baki Sadiki on the grounds that the district court used an incorrect procedural regulation,” Prešov Regional Court spokesman Michal Drimák told the TASR newswire on September 5, referring to the question over whether Sadiki could legitimately be tried due to his absence or unawareness of the proceedings. The district court in Prešov will continue the proceeding based on the original indictment.

Later, Drimák also said that the regional court overrode the verdict of the lower court because of the condition set by Kosovo that the Slovak side would ensure a new trial for Sadiki. Drimák, as quoted by SITA, pointed to provisions of the penal code, based on which if a state extradites a person under certain terms, those terms must be met.

However, the Justice Ministry responded on September 9 that it is not true that Kosovo extradited Sadiki under the guarantee that he would receive a new trial. Kosovo was never given the guarantee of a new trial, the ministry said, adding that the Kosovo side was only informed that, based on the law, the extradited person is entitled to request a new trial.

“This or any similar guarantee has never been provided to the Kosovo party,” ministry spokeswoman Jana Zlatohlávková wrote in a release provided to The Slovak Spectator. “The Kosovo party was in this connection only informed that based on the respective law the person has the option to request a retrial and not that this person is automatically entitled to the new trial.”

Kosovo extradited Sadiki, according to the ministry, under the condition of fulfilling the rule of specialty [note: which prohibits a person from being tried for any offence committed prior to his surrender other than that for which he was extradited], the guarantee that a higher sentence will not be imposed on the extradited person than the one that is the subject of the proceeding, and that the person cannot be extradited to so-called third countries without Kosovo’s agreement, Zlatohlávková wrote.

Borec considers it important that Sadiki remain in custody, despite the cancellation of the verdict, according to the release. Since the court decision is not yet available in written form, the ministry’s stance is not definite, TASR reported.

Borec will attend a session of the parliamentary defence and security committee, as proposed by MP Daniel Lipšic (independent, New Majority – Agreement), and required by opposition MPs, to discuss the steps taken by the judicial bodies in this complex case. A date for this session has not yet been set.

This is listed under point one, while under point two are the conditions based on which the minister of justice approved the extradition.

Yet, the letter that the Slovak Justice Ministry sent to Kosovo requested the extradition of Sadiki for “execution of imprisonment on the basis of an International Arrest Warrant issued by the District Court Prešov”.

The letter, signed by Borec, includes the statement that “in this regard, please be advised that under applicable Slovak Law the person has the right to request a retrial”.

After several years at large, Sadiki was arrested as part of an Interpol operation called Infrared on October 25. The Foreign Ministry sent a request for his extradition on November 9 to the Contact Office of the Slovak Republic in Pristina, which subsequently forwarded it to the EU mission in Kosovo, EULEX, which then sent it to the administration in Pristina. The procedure was complicated by the fact that Slovakia does not officially recognise Kosovo, and therefore is bound to communicate with the local authorities through EULEX, TASR wrote.

Back in December 2012, a Kosovo court in Gjilan ruled that the country can extradite Sadiki to Slovakia. At that time Slovakia’s Foreign Ministry welcomed the verdict. The ministry stressed Foreign Minister Miroslav Lajčák’s personal involvement in the extradition request, according to an official press release. At that time media warned that the fact that Slovakia has yet to officially recognise Kosovo as an independent state could complicate the extradition process.

Sadiki was extradited to Slovakia in December 2012, where he began serving his sentence. After being transported to Slovakia, Sadiki claimed that he was unaware of his conviction and requested that it be re-examined. Sadiki told the court on May 30 that since January 2010 he had been living in Serbia, Macedonia and Kosovo and did not know about the prosecution against him, nor about his sentencing, and insisted he learned of this only after he was detained in Kosovo.

Lipšic, a former interior and justice minister, warned that based on the penal code it is possible to lead a court proceeding against someone who is at large if this person was trying to avoid the court proceeding by hiding abroad. Nobody in Slovakia doubts that Sadiki was avoiding criminal prosecution and hiding abroad, Lipšic said.

“It is hard to believe that he went to Kosovo to explore [its] natural beauties or local cuisine,” Lipšic said, as quoted by TASR. He went on to say that Sadiki’s argument that he had not been in Slovakia for several years and had not known about the prosecution and the verdict, and was participating in spiritual exercises around the world, is absurd. “Nobody in Slovakia, except for the Prešov Regional Court, believes this,” Lipšic said.

Shortly after Sadiki was arrested on October 25 in Gjilan, Supreme Court boss Štefan Harabin once again denied the authenticity of a transcript of a phone conversation that he is alleged to have had in 1994 with an Albanian widely reported to be the head of a local drug mafia, calling the transcript “an intelligence game”.

Back in 2008, the opposition cited the transcript in a motion seeking to get Harabin sacked as justice minister in the first government of Robert Fico. The initiative, which failed, was led by opposition MP Lipšic, who called Harabin’s ties with Sadiki “friendly”.

The prosecutor’s office had, in 2008, confirmed that the phone transcript formed part of a request by the then head of its criminal department to have Harabin excluded from decision-making in cases involving Sadiki. However, the Bratislava I District Court ruled in September 2012 that the Office of the General Prosecutor, by confirming the authenticity of the transcript, had erred and must pay €150,000 to Harabin in damages for what the court called an incorrect official proceeding, SITA reported.