A YEAR after Prime Minister Robert Fico declared “eternal peace” with the Slovak media, he has decided to sue Spoločnosť 7 Plus, the publishing house of the Plus Jeden Deň daily. Fico alleges libel after the daily published several stories about meetings with an employee of his office, Jana Halászová, in Croatia on August 9. 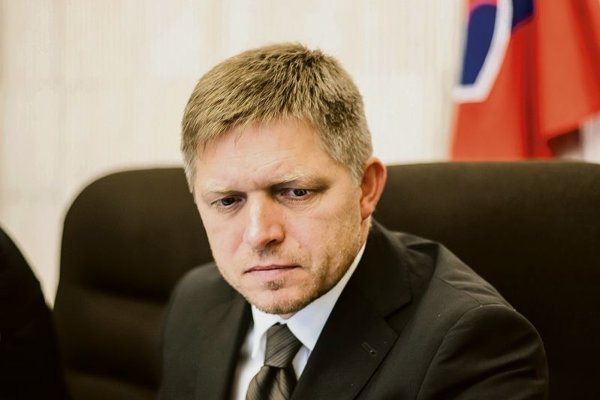 A YEAR after Prime Minister Robert Fico declared “eternal peace” with the Slovak media, he has decided to sue Spoločnosť 7 Plus, the publishing house of the Plus Jeden Deň daily. Fico alleges libel after the daily published several stories about meetings with an employee of his office, Jana Halászová, in Croatia on August 9.

Fico has sued several publishing houses during his political career for stories, opinions or cartoons, including the Plus 7 Dní weekly, Trend weekly and the Sme daily. In the latest incident, Plus Jeden Deň published a picture, taken by a still anonymous person, on September 5 and wrote that it is of Fico with Halászová having fun with friends in the evening on the beach in Opatija.

Just a few days earlier Plus 7 Dní published photos featuring Fico saying goodbye to a female employee of his office in a way which implies more than a formal professional relationship.

Besides published photos, the daily backed its claims by an anonymous author of the picture, who said that he met the couple twice in the city. “He is not a first-rate photographer but he has a very good memory,” the daily wrote and quoted the author, who said that he sat within one metre of Fico that day.

“It is a tabloid’s standard unfair practice when the editorial staff either fabricates the claims of a fictive person or pays a specific person for claims which it needs to hear,” reads an official statement issued by the Government Office. “By [publishing] today’s edition, the daily [Plus Jeden Deň] proved that there is no picture featuring the prime minister in the company of the aforementioned Government Office employee [Halászová] in Croatia.”

The office added that Fico’s presence in Croatia would also violate a rule that at least one of the three senior state officials has to be always present in Slovakia, since President Ivan Gašparovič and Speaker of Parliament Pavol Paška also left the country for vacations at that time.

Fico has always had a somewhat troubled relationship with the media and has several times described the press as a “new opposition force”. He considers the media to be completely biased and as harmful to national and state interests. Fico has also said that the press fails to “stand behind the common people”.

However, in July 2012 Fico stated that he wants to change his attitude towards the media, saying “I think it is enough” and that he does not plan any further lawsuits against media outlets except in extraordinary situations, Sme reported.

“You have to spend an incredible amount of energy on it [lawsuits], it means several years of conflict, one conflict takes usually five or six years [to resolve],” Fico said in July 2012, as quoted by Sme, adding that lawsuits involve “legal fees, paying a lawyer, everything around that”.

The prime minister sued Spoločnosť 7 Plus some 10 times through 2009, according to Sme. For instance Fico sued the daily’s publisher in 2005 for a story claiming that alleged Poprad underworld boss Milan Reichel was released from prison thanks to Fico’s amendments to the criminal code, according to the Hospodárske Noviny economic daily.

Fico also previously sued the publisher of Plus 7 Dní for publishing an interview with one of the co-founders of Fico’s party, Bohumil Hanzel, who claimed that his firm published two of Fico’s books and he received 500,000 Slovak crowns (approximately €16,600) for each book in May 2010, according to Medialne.sk news portal. In September 2012 Fico cancelled every lawsuit against the publisher, according to Sme.

In September 2009 Fico demanded €33,000 in damages from Sme for a cartoon, which he says made fun of his serious health condition while at the same time ridiculing him. The cartoon portrayed a nervous man with a red tie being told by his physician that since his x-rays shows he has no spine, his cervical spine problems are only “phantom pains”. Four years on, Fico withdrew the lawsuit, Sme reported.

“There are two possibilities. One is that he is afraid of the ruling and the second is that he started liking me,” the cartoonist Martin Šútovec said, as quoted by Sme on March 13.

Slovaks will be able to stay abroad for longer, cinemas and theatres to open on Sundays

Group of experts has updated some conditions for measures eased in the fourth stage.

Smart quarantine off to a rocky start as general prosecutor election kicks into high gear.

Blog: We can't close our eyes to the inequality accentuated by COVID-19

Walk in the shoes of Arantxa Ferrer, a physiotherapist volunteering for a Slovak NGO in Albania during the coronavirus pandemic.