EACH year the Slovak capital celebrates its love of jazz with Bratislava Jazz Days, or “Džezáky”, as Bratislavans call the autumn festival. Now in its 39th year, it has grown from a small, non-mainstream event, to filling the halls of the Incheba Expo complex. 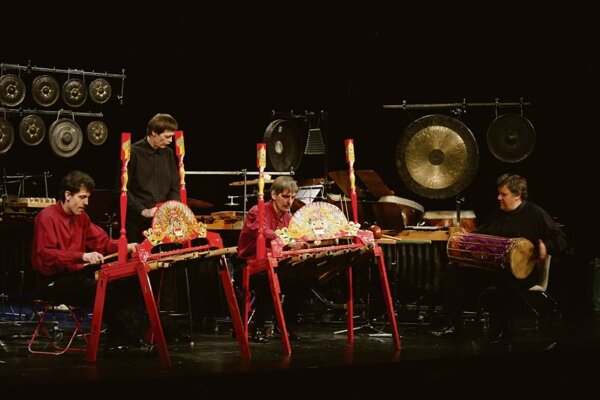 EACH year the Slovak capital celebrates its love of jazz with Bratislava Jazz Days, or “Džezáky”, as Bratislavans call the autumn festival. Now in its 39th year, it has grown from a small, non-mainstream event, to filling the halls of the Incheba Expo complex.

“When I have to sum up the concept of the festival,” its organiser singer Peter Lipa said, “I would say that we have two top saxophone players – two men from the top of charts – Joshua Redman and Chris Potter. I think that saxophonists are the strongest part this year.”

As for singers, Lipa pointed to two excellent “but less famous” musicians who “operate approximately in the same waters – the New York avant-garde” and Europe: Bilal and Jose James. Bilal originally came from a slightly experimental rap and hip-hop background, while Jose James opens and closes the biggest festivals with his blend of modern jazz and hip-hop. Lipa added that great careers are awaiting them both.

The organiser then picked the excellent guitarist, Scott Henderson, “whom we have considered inviting for some time, but this year he offered such a good line-up that we could not resist”.

Lipa explained that they traditionally invite big-name headliners on Sundays out of fear that it would otherwise be difficult to fill the auditorium after two evenings of intense jazz performances. “So far we have succeeded with this tactic, and we hope that also this year, with the Brand New Heavies, we will fulfil your expectations.”

A strong tendency toward international cooperation can be seen with Slovak group S.P. Bartus & Jazzbrothers, featuring Italian pianist Antonio Farao, and the Chicago Blues Connection, with musicians from Prešov and the US.

As for Slovak jazz ensembles, there will be the winner of last year’s talent competition, Marek Uherek Band, as well as Nikolaj Nikitin Quartet with Gabriel Jonáš and Juraj Griglák.

A long-standing Jazz Days tradition is the Stage of Young Talents competition of the SPP Foundation, which for the first time this year will include contestants from abroad: the finalists are Michal Worek Quartet, Ščevlíková & Zajaček, Hangsome, Acoustic Travellers, Personal Highway and Maringotka. They were selected by festival organisers, but the winner is selected by fans through online voting that started on October 3, or by casting votes at the festival. The competition’s winner will have the honour of opening the 40th year of Bratislava Jazz Days.

The festival takes place between October 25 and 27 at the Incheba Expo complex. More detailed information about each evening and the performing artists can be found at bjd.sk.