IN THE eastern Slovak town of Trebišov there are five elementary schools, the latest built near the entrance to a Roma settlement on the edge of town. Overcrowded with more than 850 Roma students, it is one of many schools and classrooms that build walls between ethnic communities in Slovakia – with a September report from Amnesty International finding that 43 percent of Roma children in Slovakia study in segregated classrooms or schools. 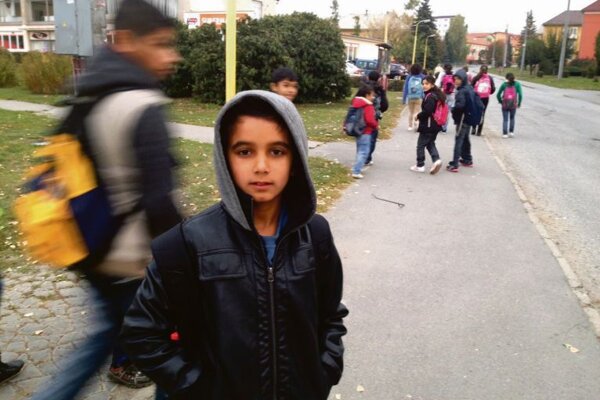 IN THE eastern Slovak town of Trebišov there are five elementary schools, the latest built near the entrance to a Roma settlement on the edge of town. Overcrowded with more than 850 Roma students, it is one of many schools and classrooms that build walls between ethnic communities in Slovakia – with a September report from Amnesty International finding that 43 percent of Roma children in Slovakia study in segregated classrooms or schools.

“If we don’t do something about it, it can be the beginning of the end,” said Jaroslav Valaštiak, the principal of an elementary school in Šarišské Michaľany, which has been both an example of discrimination against Roma students and also integration efforts in recent years.
According to the World Bank research on Roma minorities in central and eastern Europe, the vast majority of working-age Roma lack sufficient education to participate successfully in the labour market.

The elementary school Šarišské Michaľany became an example of segregation in 2010, when the Centre for Civil and Human Rights in Košice filed a lawsuit against the school. The district court in Prešov issued a ruling in favour of the centre at the beginning of 2012. As a result this small town in eastern Slovakia has become the subject of a historical precedent prohibiting segregation in education. As of this school year, the school had to start mixing Roma and non-Roma classes.

“Schools are the major institutions responsible for developing human relations,” said Vlado Rafael, director of Eduroma, a group that decided to help the school in Šarišské Michaľany transition to inclusive education.

Rafael says that integrated classes offer a higher quality of education and help improve the relationships between children because they get to know each other better and consequently help prevent minor crimes that are often the result of poverty and anonymity.
“Segregation degrades the children,” Rafael told The Slovak Spectator.

Government officials, on the other hand, do not think the situation is all that serious.

“Amnesty International universalises all of Slovakia based on one example,” said Education Minister Dušan Čaplovič in a television discussion on public-service broadcaster Radio and Television of Slovakia (RTVS).

Interior Minister Robert Kaliňák, who is in charge of the Roma reform in Slovakia, has his own ideas about segregation. When it comes to schools he said the separation along ethnic lines is based on unruly behaviour, attacks or bullying.

“Therefore it’s not based on skin colour, but on behaviour, and behaviour does not recognise the origin, nationality or the skin colour,” Kaliňák told the TASR newswire.

For those on the ground, segregation in Slovakia affects far more than a single school and is much more complex than classroom misbehaviour.

Mária Volečková, the principal of the elementary school in Nižný Žipov, said the separation of the majority and minorities in the school started some 10 years ago when parents from the majority in the village started taking their children to attend schools outside their school district.

While the village school was in a very poor state back then, she said, it has since been significantly renovated, but non-Roma children have not returned.

“It happens from time to time that children get into fights, but I always say that children fight and make up everywhere,” said Volečková.

Martin Gore, the principal of the aforementioned elementary school in the poor Roma settlement in Trebišov, disputes Kaliňák’s reasoning.

“Sometimes there is a problem with discipline, but they are kids, that happens in all the schools,” he said.

Discrimination and segregation in education is legally prohibited in Slovakia by two separate laws, the Anti-Discrimination Act and the Schools Act.

“Despite the legislation, the restriction is not applied in practice,” said Lenka Machlicová from Amnesty International Slovakia.

Laco Oravec from the Milan Šimečka Foundation thinks that Kaliňák is merely trying to defend the continued segregation. Meanwhile, Elena Gallová Kriglerová from the Centre for the Research of Ethnicity and Culture, argues that generalisations skew serious discussion of the issues.

“They always look for the bad things in Roma children, for something they are failing at,” she said. “Separating us and them is a very strong trend in the public.”

A series of interviews with citizens, school workers and Roma students found that among the most common stereotypes are that Roma children are automatically aggressive, dirty and unsophisticated and are generally a bad influence on white children. There is also a perception that a disproportionate number of Roma children are mentally handicapped.

“We haven’t got mentally challenged or dirty children. That is long gone,” said Gore, who spends his days in a school built exclusively for children from a poor Roma settlement.

For his part, Valaštiak tries to break down barriers between children with numerous activities at the school in Šarišské Michaľany. Last year he created a project for the students introducing them to different ethnicities and nationalities.

The colourful pictures of multicultural children from all over the world painted on the wall above the door to his office are a reminder of the new policies in this mixed school.

“We also have a new school anthem,” he said.

The school started the integration process just as Valaštiak took office in March 2012. On his first day he was surprised by the sight from his office window: all the students in the yard were white, while all the Roma children played in an identical yard further away. He also found that the canteen was populated by white pupils only, with Roma students getting by with dry lunches in bags given to them every morning.

The floors of the school had been divided – one for Roma and the other two for non-Roma children.
“I have nothing to lose and I want every indication of the segregation and discrimination gone,” said Valaštiak.

NGOs and government officials agree that kindergartens or some form of pre-school preparation classes for the children from marginalised communities might help with their integration. World Bank research from 2004 found that Roma children represented only 0.79 percent of children attending pre-school.

The Roma-only school in Trebišov has managed to open several “zero” classes to prepare pupils for elementary school and the principal said the pre-school classes are a big help.

According to Gore, the school needs to provide the basic education to the students who come from very poor living conditions. The students often don’t speak Slovak and they need to be taught basic hygienic habits.

“There is a solution, which has been proved abroad, as well as in Slovakia: make it obligatory for some Slovak children to attend kindergarten,” said Peter Pollák, the government’s plenipotentiary for Roma communities, in a television discussion on RTVS. “If we’re saying they are not prepared, let’s do everything for them to come prepared.”

Despite the promises, the Slovak government hasn’t done much about the plan so far and the schools do not have finances to provide pre-school education for all children from socially disadvantaged communities, according to several principals.

“We don’t get any money to help with integration from the government,” said Volečková.
The situation is the same in Šarišské Michaľany, where Valaštiak said he has not gotten any financial help from the Slovak government or the Education Ministry for the integration programme thus far.

“It is all on our own costs. It may be at the expense of the new paint or more money for the teachers, but so be it,” he said.

With the help of the activists from Eduroma, the school in Šarišské Michaľany found a number of volunteers among university students in Prešov to help them with tutoring Roma children that have been transferred to mixed classes.

“The schools lack money for teacher’s assistants or a school psychologist, who would give some advice and help children and the teachers,” Rafael said.

This year the Education Ministry approved a new school educational plan for the school in Šarišské Michaľany, which had been among Valaštiak’s goals. The principal has divided the education into two streams: one for languages and the other for polytechnical education.

Many of the Roma children do not continue their education after finishing elementary school or they continue in a vocational training school. The practical skills taught at polytechnical education might help them proceed to high school more easily and find their place on the job market, he said.

“This country has to decide,” said Gallová Kriglerová. “If we want to raise happy, productive and successful people in Slovakia, we have to invest in education.”

At his Roma populated school in Trebišov, Gore said that older students start to realise they want a different life than their parents have had.

“They can only change their lives with education,” he said.