Learning Slovak as a foreign language 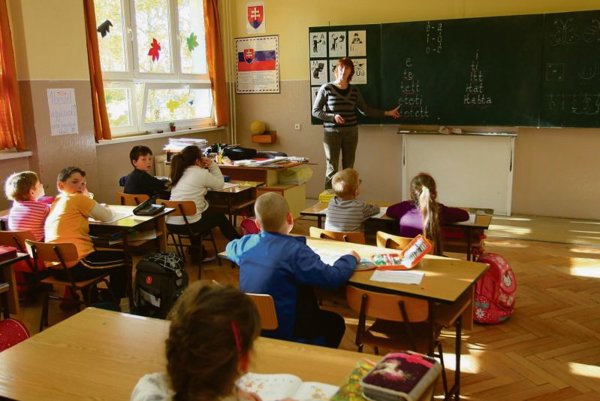 Most experts agree that the easiest way to teach ethnic Hungarians Slovak is for them to learn it during their early years in school. But this is where the agreement ends, with some advocating teaching it in a style often reserved for foreign languages, while others, including official state policy, insist it is a second mother language.

“Slovak as the official language is the only option for Hungarians to communicate with Slovaks,” said Andrea Döményová from the State Pedagogical Institute. “This is why the active use of Slovak is considered a general requirement.”

“There are intense debates about the best way to teach Slovak in schools for ethnic Hungarians,” said Ľudmila Benčatová, the president of the Central Curriculum Committee of the State Pedagogical Institute. “I totally agree with the idea that in this case Slovak should be considered as the foreign language, not the mother one, and proper teaching methods should be adapted to it.”

Teachers at schools filled with Hungarian minority students have been advocating for a change for years.

“Five years ago there was put into standards of education just one sentence which should have changed the situation: ‘Slovak language will be taught by the foreign-language-method in schools teaching in the Hungarian language,’” said Katarína Misadová, head of the Hungarian language and literature department at Comenius University. “There is still no textbook in which the Slovak language appears as a foreign one.”

Greater discussion on teaching methodology may end once and for all the stereotype that students from the Hungarian minority refuse to learn Slovak. In the end, it may come down to making learning the language more accessible.

“I haven’t experienced any resentment toward learning Slovak from Hungarian children,” said Iveta Brelíková, a teacher at the Nábrežná elementary school in Nové Zámky.

She said the problem is elsewhere and Hungarian student Linda Mlatec, a 20-year-old from Svodín, agreed. She learned Slovak in nursery school, and spoke the language when she entered elementary school.

“Teachers don’t pay enough attention to details and they rather let children use computers instead of translating Slovak texts or teaching new words during lessons,” she told The Slovak Spectator. “Students speak better English or German after finishing elementary school.”

Slovak grammar is the biggest problem for young ethnic Hungarians as the two languages have almost no similarities whatsoever.

“There is the genealogical and typological difference between Slovak and Hungarian. Additionally, there exists the research which says that Slavic languages are the most difficult to adopt for individuals with Hungarian as the mother language,” Döményová said.

“Successful Slovak language teaching is determined by many factors,” she continued. “The personality of the pupils, their intellect, the level of verbal skills in their mother language and mental specificities belong to subjective factors. From objective ones, it is important to mention family and language background in the environment where the student lives.”

Whatever the factor, all the experts seem to emphasise that any shortfall in Slovak understanding in the region is not a matter of will by the students.

“I know from my own experience that children who couldn’t speak Slovak at all, they just understood a little, were able to communicate with the others after three months,” said Korina Vinczeová, the teacher of the first grade in the Emil Boleslav Lukáč elementary school in Šahy. “They were making some small mistakes, of course, but we were working on them and trying to eliminate them.”