The home of myths and legends

The lives of people around the world are forever intertwined with the legends, myths and ghost stories that permeate their land. Every city has its mysterious places, its age-old yarns and its historical characters, whose stories have been twisted and embellished into tales to tell the grandchildren or to liven up a trip around the city streets. 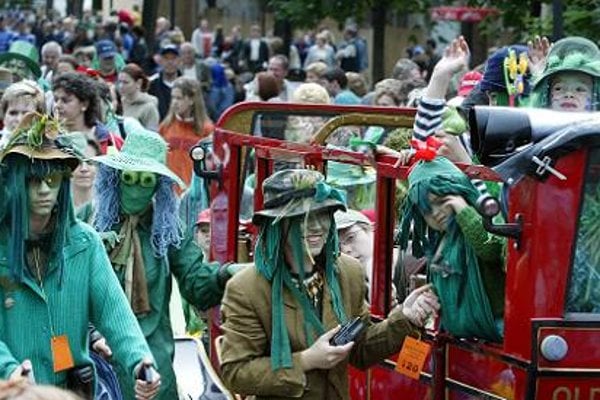 The annual Water Sprites Festival, held at the start of the rainy season, recalls the legend of King Ferko and his followers in the Danube (Source: MIroslava Cibulková)
Font size:A-|A+  Comments disabled

The lives of people around the world are forever intertwined with the legends, myths and ghost stories that permeate their land. Every city has its mysterious places, its age-old yarns and its historical characters, whose stories have been twisted and embellished into tales to tell the grandchildren or to liven up a trip around the city streets.

The capital of Slovakia is no exception. Indeed, seemingly every building, square or street in Bratislava has its own long and unlikely tale. Few stand up to much historical scrutiny; fewer still are proven. And there are variations on every theme. But each adds to the unique flavour of this vibrant city, and so here is a quick primer to Bratislava’s myths and legends.

We start with the symbol of Bratislava: its castle, whose appearance resembles a table turned upside-down, its four towers like legs in each of its corners. That, if you believe the myth, is exactly what once happened to the castle, in the dim and distant past.

One night, the residents of the castle awoke from tormented sleep. All the castle’s paintings were on the floor and the lamps were destroyed. Nobody knew what had happened during the night and the queen was furious.

She called for an old witch to tell her what had happened, and the witch pointed the finger at Klingsor, a giant wizard, who lived in Transylvania. Klingsor sometimes travelled to Germany and passed close by the castle. One night, he had picked it up and turned it upside down to use as a table so he could rest.

The queen instructed the witch to tell Klingsor never to use the castle as a table again. As yet, he has not returned. But who knows what may happen in the future...

One of the most visited places in the Old Town is Michael’s Gate below Michael’s Tower, the last remaining gate into the city from the mediaeval fortifications. At least three popular myths and legends are centred here, but the most interesting story is about the guardian of the gate.

It was 4:00 and the people in the city were sleeping. Only the guardian of the gate, whose name was Peter, was awake. Suddenly two men came to the gate, one of them carrying a scythe, and told Peter to open up. He refused and said it was too early. But they told him they had very important work to do for the lord.

The two men gave one golden ducat to Peter and finally he was persuaded to open the gate. But as soon as they entered the city, the men began a murder spree, killing Peter first. They were the carriers of the plague that then swept through Bratislava.

The fountain in Bratislava’s main square is officially named after Maximilian II, the Hungarian king of the 16th century. But it is commonly known as the Roland Fountain after a knight who features in another popular Bratislava legend.

Roland was a brave knight, who had a wonderful sword named Durandal. But he grew to be best known in the city not for his heroic exploits on the field of battle, but for a love-song he sang while sitting in the square, dedicated to his love Olifanta.

The children of the city loved Roland’s song, but the knight was summoned back to France, taking his wonderful singing with him. The children found they could not sleep without the song, so the mayor of the city built a fountain with Roland’s statue at its centre, and whose trickling water would sound like the song and lull the children to sleep.

Legend has it that the fountain is magic, and that on December 31 every year, the statue of Roland turns his head to the town hall and bows to the lords who fought for the city. The knight also comes to life on Good Friday, when he waves his sword to all four sides of the world.

However, the only person that can witness the miracle is the one born in Bratislava but who has never hurt anyone.

THE KING OF THE DANUBE

Bratislava is known as the beauty on the Danube and the river itself is known as the home to thousands of water sprites, ruled by the benevolent king Ferko. Ferko was blessed with great riches – he lived in a palace of gold – and did not need to prey on anyone except the robbers and the cheaters of the city.

Many years ago, Ferko led a procession through the city, during which he promised to continue his charitable deeds to the people of Bratislava. These days the annual Water Sprite Festival celebrations include a similar procession, headed still by Ferko. It is held on the Saturday closest to Medard’s name day, usually in June, and typically at the start of the rainy season, when the water sprites would emerge from the Danube.

“The parade resumed 15 years ago,” said Vladimír Tomčík of Devínska brána civic association which organises the parade. “It was to celebrate the 800th birthday of the water sprite Ferko. He is in his best years now.”

Bratislava is a mysterious city, so be careful of the ghosts, giants, water sprites and men carrying scythes. But if you are brave enough, be sure to visit the city’s castles, buildings and squares, where the mysteries can come alive.