SHORTLY after the election results poured in from the eight self-governing regions, known by the Slovak acronym VÚCs, Prime Minister Robert Fico announced that his Smer party was the victor of the November 9 regional vote. However, it was not Smer’s performance which attracted the most attention, but rather the election success of extremist leader Marian Kotleba of People’s Party – Our Slovakia (ĽSNS) in Banská Bystrica Region after he qualified for the second-round run-off in the governor’s race. 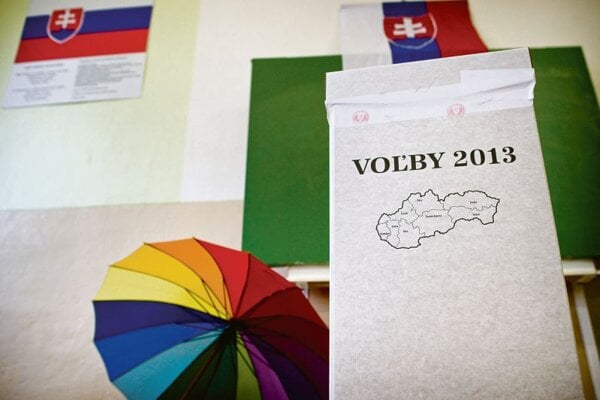 SHORTLY after the election results poured in from the eight self-governing regions, known by the Slovak acronym VÚCs, Prime Minister Robert Fico announced that his Smer party was the victor of the November 9 regional vote. However, it was not Smer’s performance which attracted the most attention, but rather the election success of extremist leader Marian Kotleba of People’s Party – Our Slovakia (ĽSNS) in Banská Bystrica Region after he qualified for the second-round run-off in the governor’s race.

Fico blamed right-wing parties for Kotleba’s success, arguing that they were unable to pick a strong enough candidate to face Smer incumbent Vladimír Maňka. Political analysts suggest that partly anti-Roma sentiments and partly the legitimisation of the nationalist discourse by Fico’s first government is behind Kotleba’s success. (For more information on Kotleba please see Extremist reaches run-off round.)

Elsewhere, three of the eight self-governing regions elected their leaders in the first round: incumbent Peter Chudík, supported by Smer, Our Region and the Party of Modern Slovakia, won the Prešov race and Smer-backed incumbent Juraj Blanár secured his position in Žilina. Trenčín went to Smer candidate Jaroslav Baška. In the remaining five regions, Bratislava, Banská Bystrica, Košice, Nitra and Trnava, the two top candidates will compete in second round elections, to be held on November 23. In four of the five regions, Smer-supported candidates won the first round.

The only region where a right-wing candidate won the first round of the VÚC vote is Bratislava, where incumbent Pavol Frešo took the race with 48.8 percent, leaving behind Monika Flašíková-Beňová, who picked up 24.1 percent, by a considerable margin and missing out on a first round victory by 1.2 percent. Though the candidate of the newly established party NOVA, Daniel Krajcer, showed up in pre-
election polls as a possible challenger to Frešo, he received just 13.56 percent of the vote. NOVA has overall performed rather poorly in the elections.

Analysts point to the second-round run-offs in Košice and Nitra as among the most interesting races still underway because of the performance of Tomáš Galbavý, supported by right-wing parties, who succeeded with support of ethnic Hungarian parties.

As for the number of mandates obtained in the elections, Smer was the most successful with its 118 elected deputies, followed by the 73 independent candidates. The most successful coalition in the election of deputies to regional parliaments is the Smer-KDH coalition, which now has 57 candidates elected. The Party of Hungarian Community (SMK) will have 34 deputies as well as the Christian Democratic Movement (KDH), Most-Híd, the Slovak Democratic and Christian Union (SDKÚ) coalition, and the wide right-wing coalition of the KDH, Most-Híd, Civic Conservative Party (OKS), Freedom and Solidarity (SaS), the SDKÚ, SMK and Green Party, the SITA newswire reported.

According to the Sme daily’s calculations, Smer will have 161 deputies out of a total of 408 elected regional parliamentary deputies, which is a 39.7 percent share. Back in 2009, Smer got 134 deputies of the 408, which was 32.8 percent of the mandates.

“We have three winners at the level of regional governors in the first round and an additional four victors, who in all likelihood will win the second round,” Fico said, as quoted by the TASR newswire on November 10.

In the first round of regional elections, 20.11 percent of 4,463,039 eligible voters cast their ballots with Banská Bystrica Region posting the highest turnout at 24.6 percent, followed by Prešov Region with 22.1 percent. The lowest turnouts were in the Trenčín (17.4 percent) and Trnava regions (17.5 percent).

The reasons for the low turnout have been known for some time, political scientist Miroslav Kusý told The Slovak Spectator, suggesting that “these are artificially created units, completely disregarding historical, social and other links”.

According to Juraj Marušiak of the Slovak Academy of Sciences (SAV), the timing of the elections plays a role in the low turnout as well.

“The elections are always held in the middle of the election cycle when something like a bad mood rules among the electorate, which means they are disappointed by the parties they voted for,” Marušiak told The Slovak Spectator. “On the other hand, so far no one persuaded them about some opposition alternative.”

In Slovakia a stronger regional identity or the “citizens’ identification with the regions” is absent, Marušiak concluded.

In the second round in Bratislava Region, the joint candidate of the centre-right parties, Frešo, backed by the SDKÚ, KDH, Most-Híd, SMK, SaS, OKS and the Green Party, will face Smer’s Flašíková-Beňová.

In Banská Bystrica Region, Vladimír Maňka, backed by Smer, KDH, SMK, the Movement for a Democratic Slovakia (HZDS), Movement for Democracy and the Green Party, garnered 49.5 percent, and will face the aforementioned Kotleba.

Zdenko Trebuľa, supported by Smer, Most-Híd and SMK, won the first round in Košice Region with 48.6 percent, and will face Rudolf Bauer in the second round, backed by the Conservative Democrats of Slovakia (KDS), who got 24.5 percent.

Nitra Region will see a second round run-off between Milan Belica of Smer, the Slovak National Party (SNS) and the Agrarian Party of the Countryside, who picked up 46.9 percent, and Tomáš Galbavý, the joint candidate of the SDKÚ, Most-Híd, NOVA, OKS, SaS and SMK, who collected 37.3 percent.

In Trnava Region, Tibor Mikuš, backed by Smer, SNS and the Communist Party of Slovakia (KSS), took 40 percent and will face József Berényi, supported by SMK and OKS, who picked up 18.3 percent of the vote.

There were 65 candidates bidding for the position of regional president – also referred to as governor – of the eight self-governing regions.

In Bratislava Region, the coalition of the SDKÚ, the KDH, Most-Híd, SMK, SaS, OKS and the Green Party, will have 34 deputies while Smer will have just one.

Bratislava to the centre- right

“Bratislava has clearly expressed that there is a strong centre-right voter [preference],” said Frešo after the election night, as quoted by Sme.

Kusý has confirmed that Bratislava is traditionally a stronghold of the right-wing since “there is a concentration of Slovakia’s intelligentsia”, while the region posts the highest per capita incomes.
“Frešo as the former governor did have quite an advantage because the region knows him,” Kusý told The Slovak Spectator.

Marušiak suggested for The Slovak Spectator that in Bratislava even known Smer figures with a history in communal politics failed.

Fico told the private broadcaster TV Markíza on November 10 that the outcome of the Bratislava race did not disappoint him, adding that during the next two weeks Frešo will have to answer some unpleasant questions.

Flašíková-Beňová first attributed her election results to what she called an “anti-campaign” but later said, as quoted by Sme, that “the prime minister commended me; we are going on”.

“It will be very interesting how Smer will decide to support Flašíková, because in the first round they supported her quite feebly,” Kusý noted, adding that a while ago they “pushed her to the sidelines and sent her to Brussels because she was an unpleasant member of the party”.

Kusý did suggest that Krajcer picked up enough votes from Frešo to prevent the incumbent from winning in the first round: “Krajcer took votes from him and negatively influenced Frešo’s path to victory. When there are two runners from the same camp, each of them are separately weaker than they would have been if there is only one of them.”

Campaigns for the second round are unlikely to be contentious, according to Marušiak, with the possible exception of Banská Bystrica where mobilisation against Kotleba is expected.

“I am sceptical as far as surprises are concerned,” said Kusý, adding that he expects the candidates with the most votes in round one to win run-offs. “There is in all cases a significant dominance by candidates of Smer.”

The political scientists expect interesting races both in Nitra as well as Košice, where the Smer-backed incumbents failed to secure their positions in the first round.

Trebuľa, who did not hide his disappointment on November 10 over failing to secure re-election in the first round, garnered 48.57 percent of the vote. His top challenger, Bauer, backed by the non-parliamentary party KDS, collected 24.53 percent.

Marušiak assumes that Bauer will try to achieve the support of other right-wing parties and “thus it will be really interesting to watch the race”.

Kusý also considers Bauer, who had already served as governor in the past, an equal partner to Trebuľa, who is supported by the ethnic Hungarian parties.

Nitra and the ethnic Hungarian factor

The situation will be interesting in Nitra as well, where Belica of Smer failed to get re-elected in the first round. He was hit by the surprising performance of Galbavý, the joint candidate of the SDKÚ, Most-Híd, NOVA, OKS, SaS and SMK, who collected 37.3 percent of votes.

Galbavý succeeded thanks to the support of the Hungarian parties in a region with a large number of ethnic Hungarians. He recorded the most significant victory, at 75.94 percent, in Štúrovo, a border town. Northern parts of the region voted for Belica, according to Sme .

In Nitra there was a “wide-Slovak coalition” in several elections which united both opposition and coalition parties to weaken the election success of ethnic Hungarian candidates in areas heavily populated by ethnic Hungarians.

Michaela Terenzani and Radka Minarechová contributed to this report