FLOODING remains an ongoing struggle for Slovakia. The Environment Ministry says its new flood protection plan will help the country withstand floods like the 2010 deluge that caused considerable damage across the regions. The plan, unveiled on October 28, was designed for the next seven years and relies on traditional preventive measures, like building barriers and other forms of flood prevention, and regulating water flow. 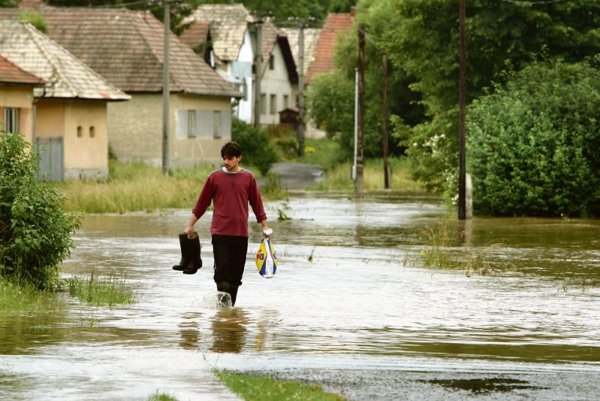 FLOODING remains an ongoing struggle for Slovakia. The Environment Ministry says its new flood protection plan will help the country withstand floods like the 2010 deluge that caused considerable damage across the regions. The plan, unveiled on October 28, was designed for the next seven years and relies on traditional preventive measures, like building barriers and other forms of flood prevention, and regulating water flow.

Representatives of environmental non-governmental organisations have criticised the plan for being non-systematic, saying it will actually worsen the situation in some of the lower districts of the river basin.

Unlike the strategy presented by the former government of Iveta Radičová, which focused on retaining rainwater in the ground, the new measures include conventional flood prevention measures like constructing levees, polders, water tanks and water pumps. Moreover, water managers will help municipalities to maintain river flows, which would involve dredging river beds and levelling river banks, the ministry says. The new measures will total €1.154 billion.

He cited the mobile flood barrier system used in Bratislava this June as an example. Though the damage from the flooding cost the city more than €64,000, this was 98 percent lower than costs incurred by floods in 2002, when the capital was last struck by a serious deluge, the TA3 news channel reported.

The ministry selected 559 localities that are most likely to be affected by flooding, most of which are located in eastern Slovakia, which it plans to protect through constructing around 600 different types of flood prevention systems. These projects will bring jobs to some long-term unemployed as well, Environment Ministry spokesperson Maroš Stano told The Slovak Spectator.

Yet, environmental NGOs say that the strategy is a return to so-called “grey infrastructure”, a term used to describe the construction of solid, concrete objects. Though the ministry’s strategy might help to protect bigger towns and cities from flooding, it has several weak points when it comes to smaller municipalities, Juraj Kohutiar, analyst with the Civil Society Development Foundation (NPOA), told The Slovak Spectator.

He explained that water managers cannot build levees above every village. Moreover, levees increase the level of water downstream, which puts the inhabitants of these areas at greater risk, Kohutiar added.

Additionally, the strategy increases the threat of droughts, climate change and soil erosion, and does nothing to protect biodiversity, said Matej Michal Kravčík from the civic association Ľudia a voda (People and Water).

The new strategy is also at odds with recent trends in the EU and abroad, which involve the development of rainwater retention systems and green infrastructure, Katarína Vajdová, head of NPOA, added.

Several governments prepared flood prevention strategies in the past which were not fully carried out. For example, the government implemented about 32 percent of the strategy prepared in 2001, despite planning to invest together €600 million in flood protection measures during 10 years, the TASR newswire wrote.

In 2011 the government of Iveta Radičová approved the Programme of Revitalisation of the Land and Integrated Management of River Basins in Slovakia, prepared by then government proxy for local administration, integrated management of river banks and land Martin Kováč, in cooperation with Kravčík from People and Water. It was designed to cover six to 10 years, during which the government was to spend about €1 billion.

A total of 488 municipalities participated in the programme. With financial and methodological help from the Government Office and labour offices, it created 7,700 seasonal jobs, mostly for the long-term unemployed. The project resulted in about 60,000 various systems to retain water in the soil, Kováč told the press conference held in early April 2012.

The project, for which the government spent altogether more than €43 million, was halted with the end of the Iveta Radičová government in March 2012.

The current management of the Environmental Ministry however viewed the whole revitalisation programme as non-systematic. Moreover, according to Stano, there was no expert discussion before the water dykes were constructed (one component of the revitalisation programme) and the water managers were not given the opportunity to criticise the project.

The ministry’s spokesperson said it does not oppose the method of rainwater retention, but if Slovakia wants to prevent floods effectively, it should employ a variety of measures, including more traditional flood prevention systems.

On the other hand, NGO representatives point to several environmental benefits that the retention system can bring.

Unlike the current strategy, the Radičová government’s revitalisation programme helped protect the land from flooding in an integrated, systematic and complex way. It was designed to prevent every cubic metre of water retained in the upper sections of a stream from reaching inhabitants in the lowlands. Moreover, retaining rainwater improves an area’s energy potential as well as boating conditions on rivers, even in dry seasons, Kravčík explained.

Moreover, Han pointed to several risks which traditional flood prevention systems pose to inhabitants along lower sections of a river, explaining that they would result in larger and costlier flood prevention measures. Also, people living upstream might experience droughts during dry seasons.

“However, when they retain water from upstream, then the people [living] downstream are happy because of the reduced flooding risk, and the people upstream can use the water for their ecosystem,” Han told The Slovak Spectator.