JOSÉ James, a 35-year-old American, is often described as a jazz singer for the hip-hop generation. He admits that this genre, together with indie rock, has helped shape his music and has become a kind of stylistic reference point for his music and his performances. 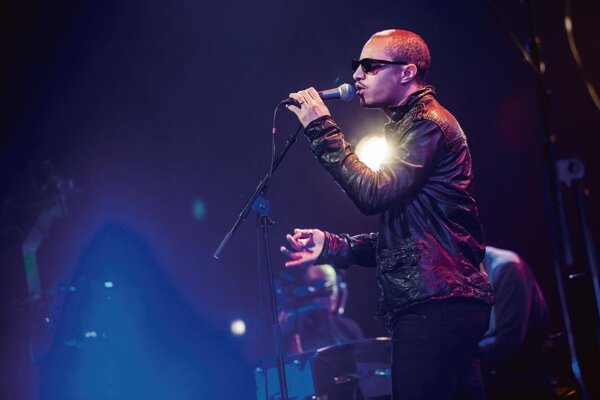 JOSÉ James, a 35-year-old American, is often described as a jazz singer for the hip-hop generation. He admits that this genre, together with indie rock, has helped shape his music and has become a kind of stylistic reference point for his music and his performances.

“It doesn’t describe all of what I do, but if somebody has never heard my music, it makes a lot of sense, [and] he gets an idea of what to expect,” James said.

The Slovak Spectator spoke with James, who performed at Bratislava Jazz Days on October 25, about his music, his latest album and what he has in store for the future.

The Slovak Spectator (TSS): You are often described as the kind of musician who usually opens and closes festivals. Why do you think this is?
José James (JJ): It’s actually true. I think in a jazz way what I am doing and what my band is doing is very progressive and different from more traditional jazz. As a singer I’m living in a place that is halfway between this very strong instrumental jazz and a purer singing world. It’s a strong flavour and like any good chef presenting courses you have to put it in the right place.

TSS: You are currently touring in support of your latest album, No Beginning No End, released under a new record label. Do you see this album as a new chapter in your life and music career?
JJ: Absolutely. This is a huge departure for me: the way I made it, the amount of musicians involved, the kind of writing I did. No Beginning No End meant that I didn’t have any limits on the way that I wanted to present my music. It took me three years to make. I did it in a more pop-production style. It gave me a lot of time to really think about each song. And Takuya Kuroda, the trumpet player tonight, he did whole arrangements. So we had months to sit and listen, to work on things. We spent a whole week working together, just hanging out, listening to the tracks, drinking rum [laughs].

TSS: You collaborated with many musicians on this album. Which of these was the most notable for you?
JJ: There were so many stories, but I think [it is] the first recording session I did in New York with Robert Glasper, Chris Dave and Pino Palladino. That was actually the first time those three ever played together, as a trio. I was a little nervous. I knew Robert Glasper because we went to school together, and I had just met with Pino Palladino a couple of months before. I hadn’t met Chris Dave. And we played the song Vanguard on the album. And it was just so amazing.

TSS: With which artist would you like to collaborate in the future?
JJ: There are two artists I really want to collaborate with. One is Corinne Bailey Rae. She is a really talented writer and singer. And Earl Sweatshirt.

TSS: What will be different on the new album?
JJ: There’s a lot more electronic production, a lot more rock energy. It’s not a rock album, but I work with electric guitars. Without brass. And it’s definitely more kind of a singer-song-writer album. No Beginning No End is more like a vibe. There are great songs, but it’s about sound, feeling and the groove. I really want to make an album that sounds like 2014.

TSS: Where do you get inspiration for your music?
JJ: Just everywhere. I’m staying downtown and I wake up and I see a beautiful view of the city and it makes me feel a certain feeling. I carry that feeling with me and it will come out later. Meeting people, learning, hearing other bands on tour. I also get inspired by new music, new artists. I really like listening to a lot of stuff where there are only instruments, because it lets my mind dream over it.

TSS: What would you do if you were not playing music?
JJ: I’ve done a lot of writing, fiction. My dream is to publish a novel in my lifetime. I have a book that I’ve been writing off and on for a few years. So if I didn’t do music, I would just write and travel. Travel in a more relaxed way.

TSS: And what persuaded you to devote your life to music and jazz?
JJ: When I first started in music, I was like any other kid: I wanted to be famous. And then I realised that my music makes people happy, that my singing makes people feel good. I realised there was a power that I’ve been giving, and I feel that we are all giving this gift in life to share with people. It’s up to us to discover it. And I didn’t know I was going to do music at all. I wasn’t serious with doing music until I was maybe 17, which is really late for musicians. It was just a higher power saying “pay attention to this, this is important”. I haven’t looked back since.