VOTERS in Banská Bystrica Region have elected Marian Kotleba, who has a history of racist statements and acts, to lead the self-governing region, known by Slovaks under the acronym VÚC. Kotleba of the People’s Party – Our Slovakia (ĽSNS), picked up 55.53 percent in the second round run-off and thus defeated Vladimír Maňka, backed by Smer, Christian Democratic Movement (KDH), Most-Híd, Party of Hungarian Community (SMK), Movement for a Democratic Slovakia (HZDS), Movement for Democracy and the Green Party, who collected 44.46 percent, according to official results published by the Slovak Statistics Office. 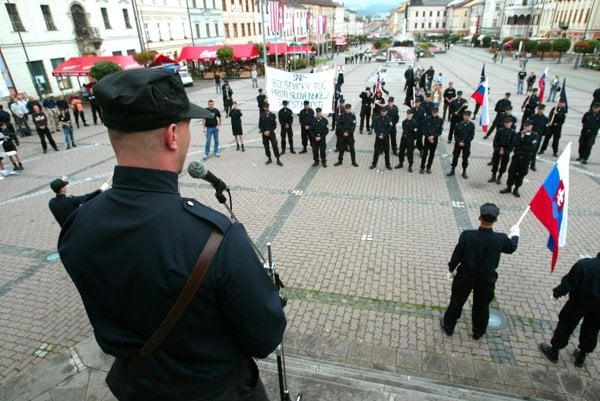 VOTERS in Banská Bystrica Region have elected Marian Kotleba, who has a history of racist statements and acts, to lead the self-governing region, known by Slovaks under the acronym VÚC. Kotleba of the People’s Party – Our Slovakia (ĽSNS), picked up 55.53 percent in the second round run-off and thus defeated Vladimír Maňka, backed by Smer, Christian Democratic Movement (KDH), Most-Híd, Party of Hungarian Community (SMK), Movement for a Democratic Slovakia (HZDS), Movement for Democracy and the Green Party, who collected 44.46 percent, according to official results published by the Slovak Statistics Office.

Kotleba finished as the regional councillor with the single biggest voter support in the whole country in absolute numbers in the first round. Political analysts have suggested that Kotleba’s success was fuelled partly by anti-Roma sentiments and partly by the legitimisation of nationalist discourse by Robert Fico’s first government.

Prime Minister Robert Fico blamed the right wing and its voters, who refused to vote for the Smer candidate, for Kotleba’s victory. He primarily attributed the result to the fact that the Slovak Democratic and Christian Union (SDKÚ) and Freedom and Solidarity (SaS) did not endorse Maňka, the SITA newswire reported.

“If someone was not able to support Mr Maňka, they carry direct responsibility,” Fico said, placing the blame squarely on SDKÚ boss Pavol Frešo.

Yet, Frešo, who defended his regional top post in Bratislava, said that Kotleba’s victory is a defeat for democracy and “a warning finger”, according to the TASR newswire.

“Let’s say it openly, it is a blow that no one expected,” Frešo said, adding that democratic parties should now sit down and discuss how to take any “fertile soil” away from the extremists.

When asked whether the SDKÚ carries responsibility for Kotleba’s victory, he refused to be more specific on whom to blame.

Nevertheless, Fico insisted that a considerable part of the votes that went to Kotleba came from right-wing voters who refused to support Smer.

“Those were the words of the right wing, which said that the Antichrist, Satan, Hitler, Mussolini, whoever, is better than Smer, this is how it is,” Fico argued, as quoted by SITA.

The prime minister also blamed the media, arguing that journalists did a massive campaign for Kotleba. He nevertheless still supports Maňka and does not see any reason to review his performance in the party.

Fico also said that he respects the will of the voters, who chose Kotleba.

According to Maňka, Kotleba has three groups of voters: one is comprised of the hardcore voters, who are not large in number but who are serious about getting out the vote. The second group, according to Maňka, consists of people who voted in protest out of a sense that their problems are not being addressed by politicians, and the third group is made up of young people who organised through social websites with a message of ‘let’s go vote and have some fun’, Maňka said, as quoted by SITA.

“A great share of guilt lies with all political representations, first of all the current one, Smer, which not even in hints has been addressing the Roma issue,” Abrahám, who also serves as rector of the Bratislava International School of Liberal Arts (BISLA), told SITA.

Abrahám noted that Smer nominated Maňka, a man who is also a European Parliament deputy and who stands very far from his region.

“Those 70,000 people who voted for Kotleba did not do it as a protest vote, but as a response to words by an extremist who appealed to them,” Abrahám said, adding that neither Maňka nor any other candidate was able to do that.

Abrahám said he hopes that now society will look at the issue of the Roma community as a challenge that needs to be addressed and which can be solved and from which “we all can benefit and thus show a triumph against Kotleba”.

“If I am to be cynical I would say Slovakia needed Kotleba,” Abrahám added.

Beating the opposition candidate of the SDKÚ, Ľudovít Kaník, Kotleba advanced into the November 23 second round with more than 21 percent of the vote.

Kotleba told SITA that he does not consider his victory a surprise. He said he plans to revise contracts concluded by the previous management and reduce the number of employees of the VÚC office from 49 to 40.

Originally a secondary school teacher, Kotleba is well known on the margins of the Slovak political scene. He founded and led the Slovenská Pospolitosť (Slovak Togetherness) far-right political party, which was later banned by the Interior Ministry and existed only as a civic organisation. He frequently organised and participated in anti-Roma demonstrations or marches commemorating the Nazi-allied wartime Slovak state and its president Jozef Tiso. He has been detained and charged repeatedly for crimes including racial defamation.

Observers originally had said that they saw almost no chance for Kotleba to succeed in the second round against the Smer candidate, but nonetheless found his strong showing disturbing.