STUDENTS in Slovakia performed poorly in the international testing of 15-year olds. Results show mathematics, this year’s highlighted area of testing, proves to be a problem for many Slovak pupils.“For the first time the results of Slovak pupils in all three considered areas are significantly lower than the average performance of the OECD countries,” the National Institute of Certified Measuring of Education (NÚCEM) reported. 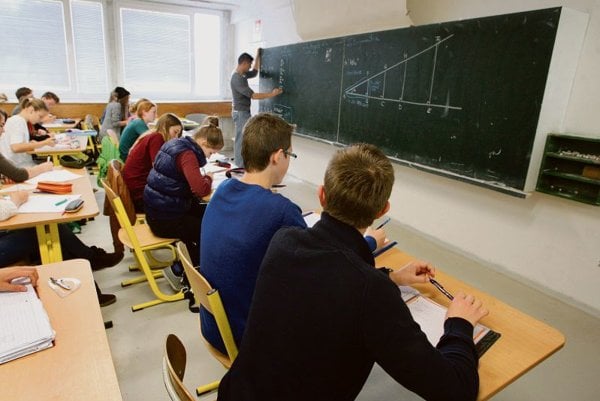 STUDENTS in Slovakia performed poorly in the international testing of 15-year olds. Results show mathematics, this year’s highlighted area of testing, proves to be a problem for many Slovak pupils.
“For the first time the results of Slovak pupils in all three considered areas are significantly lower than the average performance of the OECD countries,” the National Institute of Certified Measuring of Education (NÚCEM) reported.

Among 34 Organisation for Economic Co-operation and Development (OECD) countries, Slovakia placed below average, and in math scored higher than only five other countries – Israel, Greece, Turkey, Chile and Mexico. Slovakia’s results are comparable to those of Portugal, Italy, Spain, Norway, Russia, the US, Sweden, Lithuania and Hungary, according to NÚCEM.

The results of the test indicate that still fewer Slovak teenagers are mastering basic math knowledge and skills. While the share of such pupils was nearly 20 percent 10 years ago, now it is more than one-quarter (27.5 percent). Among 34 OECD countries, Slovak pupils placed 23rd - 29th in math, 32nd in reading and 28th - 31st in science.

What is alarming about the math results is the fact that the number of pupils who have fallen into the so-called risk group has increased. The risk group is comprised of all students who ranked in the bottom of the six levels in which they are divided based on their results. Students in the risk group are likely to finish their compulsory schooling without gaining at least basic mathematical skills and knowledge, according to NÚCEM.

Education Minister Dušan Čaplovič said in response to the results that he expects the performance of Slovak pupils to decrease even more, and blamed among other things what he called the prevalent and early selection of pupils to various types of schools, mainly eight-year grammar schools, the SITA newswire reported.

Due to this selection, as well as the social background of the pupils, there are big differences among pupils from different schools and even within the same schools, he said.

The results, based on the type of school in which the pupils are enrolled, show that the worst performers are students from vocational schools (who do not finish their studies with a state school-leaving exam). Over 63 percent of them (up by 8.6 percent from 2009) placed in the risk group, according to NÚCEM. Among primary school pupils, over 38 percent placed in the risk group.
Some pupils in eight-year grammar schools (3.2 percent) returned results that placed them in the risk group as well, which NÚCEM calls a surprising finding “given their selection of their study programme”.

On the other hand, the four-year gymnasiums prove to be the most stable type of school, with the smallest changes in the percentage of pupils distributed among the six performance levels, NÚCEM reported.

In Slovakia, socio-economic background has a higher than average impact on pupils’ performance when compared with other OECD countries, according to NÚCEM.

“The Slovak schooling system is unable to moderate the differences between pupils given by their social and economic background,” NÚCEM wrote, adding that socio-economic factors are among the most influential in Slovakia among the OECD countries, and their importance for the performance of pupils rose in Slovakia even in 2012 when compared to 2009.

The Programme for International Student Assessment (PISA) is a triennial international survey which aims to evaluate education systems worldwide by testing the skills and knowledge of 15-year-old students in reading, mathematics and science. It is overseen by the OECD and the 2012 assessment is the 5th survey.

The 2012 survey took place in 65 countries, of which 34 are OECD countries, and focused primarily on mathematics. Around 510,000 students aged 15 participated in the assessment, representing about 28 million 15-year-olds globally, according to OECD.

In Slovakia, 231 schools (primary schools, grammar schools, gymnasiums and secondary professional schools) and 5,737 pupils participated in the survey, according to NÚCEM.