Nature in medieval art in Bratislava

DESPITE Bratislava Castle’s old age, until recently most of its exhibits focused on more modern art and collections. However, the Slovak capital’s dominant landmark now houses Art and Nature of Medieval Europe, a unique exhibition of items from the Middle Ages, lent by the Cluny National Museum of the Middle Ages in Paris, in return for the successful exhibition, With Gold and Fire: Slovak Art at the Dawn of the Middle Ages, prepared by the Slovak National Gallery for the Cluny Museum in 2010. 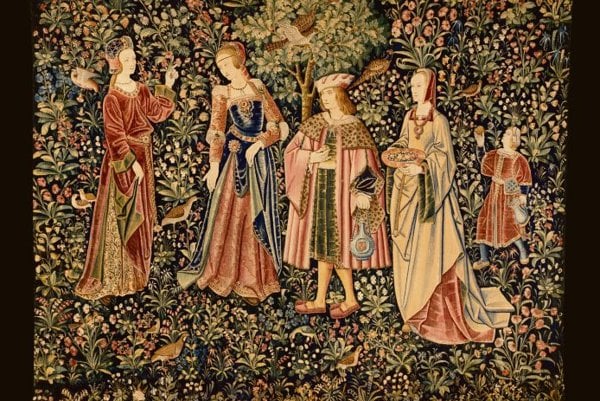 DESPITE Bratislava Castle’s old age, until recently most of its exhibits focused on more modern art and collections. However, the Slovak capital’s dominant landmark now houses Art and Nature of Medieval Europe, a unique exhibition of items from the Middle Ages, lent by the Cluny National Museum of the Middle Ages in Paris, in return for the successful exhibition, With Gold and Fire: Slovak Art at the Dawn of the Middle Ages, prepared by the Slovak National Gallery for the Cluny Museum in 2010.

The exhibition “is the best, most prestigious, most expensive and most demanding one of this year”, head of the Bratislava Castle branch of the Slovak National Museum, Branislav Panis, said on October 29, before it opened. The press conference that day was also attended by the French curator of the exhibition, Christine Descatoire, Slovak curator Dušan Buran and the artists who designed the exhibition space.

An important phenomenon of the exhibition – which references the medieval building in which the Cluny Museum resides – was the exhibition’s design, which required modifications to the big room in the castle.

One of the designers of the space, Daniel Šubin, told The Slovak Spectator that the idea was to divide the room into three long, narrow corridors, to evoke a three-nave church and a sense of spiritual contemplation, with each corridor serving a different purpose: the first contains symbols and markings representing the exhibited items, reflected as silhouettes against a screen along the wall; the middle corridor is a path for the visitors; and the third contains the exhibits. “We wanted to give verticality to the space,” Šubin explained. Descatoire stressed the idea of the reflected symbols pointing to the more crucial items in a simple but striking way.

The exhibition reflects a crucial aspect of medieval life and its role in art: nature. From plants, landscapes and animals that were present in everyday life, to mythological creatures, it shows how nature was perceived in medieval times and demonstrates its importance.

“Almost 90 percent of people lived in the countryside then,” the French curator explained, “and even for the urban dwellers, it was omnipresent, and the art reflected what nature offered for everybody.” Nature was a source of rich inspiration.

Not surprisingly, the core of the exhibition contains items and artworks connected with religious use and religious buildings, but some of them, especially from the late Middle Ages, are of a more secular character. The collection is comprised of about 100 pieces dating from the 5th through the 16th centuries, many of which are the work of goldsmiths and textile manufactures, but also large tapestries and fragments of stone architectural elements.

Most of the items from France are enhanced with a few objects from Slovakia, like panel paintings, coats of arms and sections of a Gothic church pew.

However, “the exhibition also presents genres and types of art that are virtually not present in Slovak museums, e.g. textiles with Oriental motifs from the 5th to 13th centuries, ivory reliefs or tapestries with court scenes from the break of the 15th and 16th centuries,” Buran said.

The exhibition is divided into 10 sections, which partially follow the timeline, but are more focused on themes. Items include tiny filigree, jewels, religious implements used in church, like a reliquary or an etui for altar bread, as well as massive objects like a capital of an ancient column and Islam-influenced art. The collection contains the best examples of items from this period.
Buran stressed the importance of the tapestries and textiles in the exhibit, which are very rare in Slovakia (including a 5th-century Coptic textile). He also praised the modern design of the exhibition space, opining that for the old artworks to address contemporary visitors, a modern “mediator”, i.e. the setting, can be of great help.

The exhibition can be seen at Bratislava Castle until February 2, daily except Monday between 9:00 and 17:00 (last entry at 16:00). It is accompanied by an elaborate catalogue with a summary in English (costing €18) which includes even more items than the actual exhibition (for logistical reasons not all of the items could be installed).