THE POLICE are still working on several theories in a murder case that shook the country more than three years ago when prominent lawyer Ernest Valko was shot dead in his house in Limbach, near Bratislava. One now appears the most likely, according to Police Corps President Tibor Gašpar in response to recent media speculation pertaining to the case. 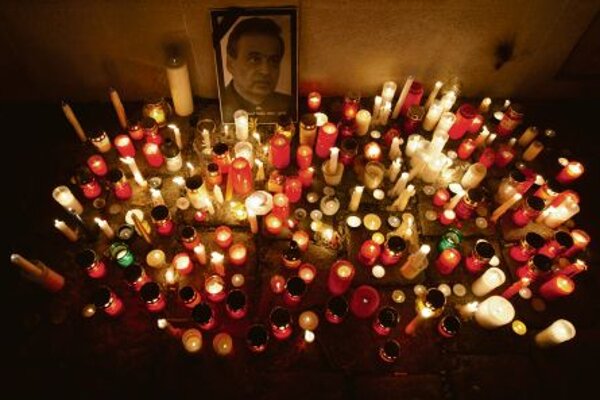 THE POLICE are still working on several theories in a murder case that shook the country more than three years ago when prominent lawyer Ernest Valko was shot dead in his house in Limbach, near Bratislava. One now appears the most likely, according to Police Corps President Tibor Gašpar in response to recent media speculation pertaining to the case.

The Hospodárske Noviny daily reported on January 2 that the police have come across new evidence, which could lead to criminal charges in the death of Valko, who played a central role in framing several crucial post-communist laws which set the course for Czechoslovakia and then Slovakia after the Velvet Revolution.

“There are still several valid theories, with some having higher relevance in terms of evidence we obtained than the others,” Gašpar told the press, as quoted by the SITA newswire. “One of the versions is seriously relevant; [it] has a good basis and we are working on verifying it.”

Valko, who served as deputy speaker of the lower house of the Czechoslovak Federal Parliament in 1990-1991, and in 1992 was chosen as the top official of the Czechoslovak Constitutional Court, was found shot dead in his house in Limbach by his ex-wife and daughter in November 2010.

Last November, Hospodárske Noviny reported that the police knew the name of the person who killed Valko, referring to information provided by then deputy general prosecutor Peter Šufliarsky, who said the motive had been clarified as well. The daily also suggested that the murder was not an accident committed during a burglary. At that time, police refused to comment.

Valko, born in 1953, specialised in commercial and constitutional law, and took part in the post-1989 drafting of some of the basic documents of the state, including the Bill of Basic Rights and Liberties, and the Commercial Act.

In August 1998, Valko represented the Slovak Central Election Commission in a crucial case brought by then-prime minister Vladimír Mečiar, who questioned the eligibility of the opposition Slovak Democratic Coalition (SDK) to stand in that year’s parliamentary elections. Valko won the case, allowing the SDK to participate and thereby unseat the quasi-authoritarian Mečiar government.

In early November 2010, Valko was appointed to the supervisory board of the gas utility Slovenský Plynárenský Priemysel (SPP). He was widely known for his work on a case involving the so-called Ducký notes. In the late 1990s, Ján Ducký, general director of SPP, allegedly signed at least 24 controversial promissory notes, some of whose holders later tried to use them to demand billions of Slovak crowns from the state.

Ducký himself was murdered in January 1999. The circumstances surrounding his death have never been explained. Valko represented SPP, which was at the time owned by the state, in the case.

Valko also represented the state-owned lottery company Tipos in another multi-million-euro case. Tipos was sued in 2000 by the Czech lottery firm Športka for what it called unauthorised use of lottery trademarks and business practices, and the consequent loss of earnings. Športka eventually won significant damages but sold its claim to Cyprus-based firm Lemikon Limited, Sme reported. Tipos signed a deal with Lemikon and paid Sk400 million (around €13 million) to the company, but after Slovakia’s prosecutor filed a special appeal, the parties cancelled the agreement and recommenced legal action, with Valko representing the state.

Valko, together with entrepreneur Ladislav Rehák, spent three days in custody in November 2006 after police accused them of forcing two men they said had cheated them of Sk15 million to sign a statement acknowledging the debt in front of a public notary. Police seized computers from Valko’s office that were unrelated to the investigation, but which contained sensitive information about cases that Valko had worked on, including the Ducký notes case. In 2007, a prosecutor ruled that the police had committed procedural errors in their search of Valko’s office. All charges against him were dropped in 2008. Two weeks after his death, then interior minister Daniel Lipšic apologised to Valko for the police proceeding.