AMONG the owners of flats that were returned as part of post-communist restitution there was a group that received their properties still occupied by tenants. As the rent of many such properties was still regulated, a struggle has ensued for much of the past two decades. 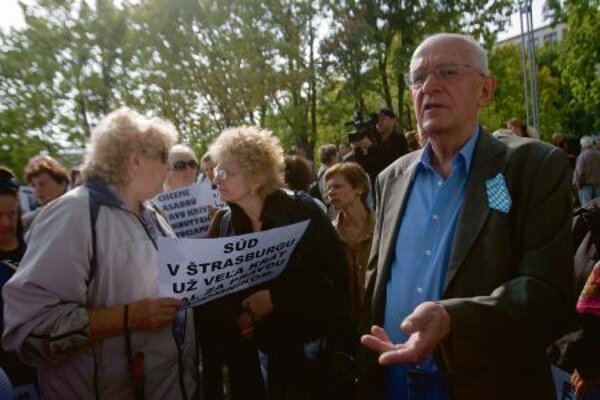 AMONG the owners of flats that were returned as part of post-communist restitution there was a group that received their properties still occupied by tenants. As the rent of many such properties was still regulated, a struggle has ensued for much of the past two decades.

On January 28, the European Court of Human Rights (ECHR) said that such rent control as applied to certain properties in Bratislava and Trnava, violates the rights of property owners.

The ruling in the case of Bittó and others vs. Slovakia is the first such case concerning rent control to be concluded. To adhere with the judgment the state will now have to find ways to compensate the owners. But the controversy does not end there, as other pending complaints remain, some from tenants who, according to a still valid law, must leave the apartments by the end of 2016.
“The owners of flats welcomed the verdict, especially because after 20 years of fighting, the independent, recognised judicial institution agreed that their human rights have been long and deliberately violated by their own state which, paradoxically, claims to stick to the tradition of a democratic state and the rule of law,” Karol Spišák, from the Civic Association of Owners with Regulated Rentals, told The Slovak Spectator.

The owners of rent-controlled flats now hope that the verdict will help accelerate a resolution in the whole matter and that the state will finally respect their right to use their own property, he added.

On the other side of the dispute, Kristián Straka, of the Right to a Dwelling civic association that represents tenants, declined to comment on the verdict. He said the tenants did not participate in this dispute and insisted they have never cast doubt on the claims of the owners. Conversely, they have been stressing that the long-term failure of the government to deal with the problem is suitable for neither tenants nor owners, he told The Slovak Spectator.

During proceedings, the ECHR admitted that the system of regulated rent in Slovakia has a basis in related laws and accepted the Slovak government’s argument that rent control has a legitimate aim, and is thus in line with the public interest. It also accepted the measures through which the state gradually increased the regulated rent with the aim of eventually ending it. On the other hand, the ECHR pointed out that this principle has been in use for more than 20 years and that the governments have repeatedly postponed the final step of deregulation.

“Therefore it did not consider the measures which have been adopted on the national level as sufficient and found the violation of the property rights of applicants,” Marica Pirošíková, Slovakia’s representative before the ECHR told The Slovak Spectator.

The ECHR dismissed only the complaints filed by owners of flats whose rent was deregulated six months before lodging the complaint. It also did not separately examine the complaint pertaining to the alleged discrimination of the complainants, according to a statement released by the Slovak Justice Ministry.

The owners of rent-controlled flats will now discuss the compensation with the working committee established by the Finance, Transport and Justice ministries within three months after the ruling becomes valid.

If they fail to agree, the ECHR will issue a separate ruling on the compensation, Pirošíková said.
Moreover, the government will have to pass the legislative measures to redress those owners in a position similar to to applicants who brought the ECHR case. Though there is no specific deadline to do so, the Committee of Ministers of the Council of Europe will monitor the situation, Pirošíková said.

The history of the issue goes back to the communist regime, during which housing was mostly managed by the state. After the communist takeover in 1948 and the subsequent nationalisation of property, the state rented empty residential units in confiscated properties. When the regime fell in 1989, these properties were returned to their former owners, leaving both tenants and owners in a sort of trap.

The tenants, through no fault of their own, and unlike other occupants of state housing post-1989, were not able to acquire the property they lived in for a symbolic price. They were also left in a state of uncertainty about future rent, as most of the houses returned to former owners are in desirable locations. On the other hand, the owners complained that the presence of tenants means that their properties have not been fully returned, and say they cannot afford to invest in the buildings because the rent that tenants pay is regulated and thus too low. The owners say that flats that would rent for €700 a month on the open market, now rent for as little as €120.

Several owners and inheritors filed complaints with the ECHR in Strasbourg against the Slovak government in May 2009, complaining that the rent control restricted their right to peacefully enjoy their possessions. They sought the payment of damages of at least €50,000 each, as well as compensation for losses incurred – the difference between market and regulated rents.

Based on a law effective since September 2011, owners are permitted to increase regulated monthly rent, but only once a year, and by no more than 20 percent through 2015. Owners will then be allowed to charge market rates or use the property in any way they want. Some owners were eligible to terminate their rental contract before March 31, 2012. In such cases, the tenants had one year to vacate the property.

The law also stipulates that municipalities have to secure substitute housing for people asked to leave their homes against their will, with the deadline being set for the end of 2016. Only certain qualifying tenants are able to apply for substitute apartments with rent control. For this purpose the Transport Ministry allocated a total of €72.7 million. If the municipalities fail to do so, they will be required to pay the difference between the regulated rent and market levels until such an apartment is provided.

The Transport Ministry has estimated that as many as 923 apartments (706 in Bratislava) and 2,300 tenants are affected by the ECHR ruling. Until now the ministry has allocated nearly €1.6 million for constructing just 28 substitute flats in Žilina, Piešťany and Banská Bystrica. The ministry expects that there will be more applications for the money during this and next year, spokesman Martin Kóňa said.

In Bratislava there are 795 registered applications for substitute housing, but some pertain to the same flat, Bratislava City Hall spokesman Stanislav Ščepán told The Slovak Spectator.

He added that the city has already processed 471 applications, dismissed 52 applications and stopped proceedings for 57 applications. The total investment will stand at about €30 million without VAT, Ščepán said.

The Right for Dwelling group knows only about one town which offered 20 flats to tenants, Straka said, pointing out that nearly half the time between passing the law in 2011 and the 2016 deadline has already passed.

He also pointed to association’s own financial compensation proposal which they submitted to the ministry in 2007. This plan is, according to him, much cheaper and simpler than substitute apartments.

“If this proposal was accepted the problem of tenants would be already resolved,” Straka said.