Exports are key to economic growth

SLOVAKIA’S economy is small and open, meaning that it exports a significant portion of its production. While experts view Slovakia’s economic openness as a natural development, they also say it could pose challenges for the country. 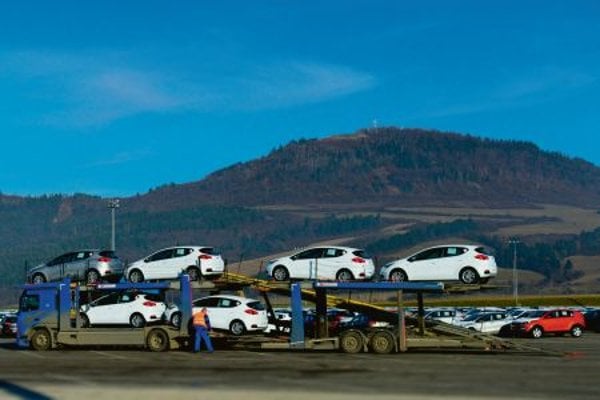 SLOVAKIA’S economy is small and open, meaning that it exports a significant portion of its production. While experts view Slovakia’s economic openness as a natural development, they also say it could pose challenges for the country.

“The export of goods and services is an existential necessity for Slovakia’s society,” Prime Minister Robert Fico said at a meeting with country’s biggest exporters in mid December, as cited by the SITA newswire, highlighting that Slovakia’s exports have been increasing during the global economic crisis and that the balance has been positive.

Martin Baláž, an analyst with Slovenská Sporiteľňa, estimates that the volume of Slovakia’s foreign trade accounts for almost 190 percent of GDP, indicating the economy’s high level of openness.

“Our economy is significantly interlinked with countries of the eurozone and especially our biggest trade partner, Germany,” Baláž told The Slovak Spectator. “On one hand this enables Slovakia’s economy to grow at a higher rate during times when the eurozone thrives, but on the other hand, it makes Slovakia’s economy less vulnerable to external shocks, which was seen after the outbreak of the economic crisis in 2009.”

The Economy Ministry calculated the openness of Slovakia’s economy in 2012 at 170.8 percent, which means an increase by 7.9 percentage points compared with 2011. Based on one of the ministry’s scenarios for Slovakia’s foreign trade development, it estimates that the economy’s openness will continue to increase up to 250 percent by 2020.

Slovakia’s economic openness brings opportunities and risks, with the ministry citing as an opportunity the fact that foreign trade is a significant source of economic growth. Based on European Commission data, the EU’s foreign trade with so-called third countries increased GDP growth by 0.9 percentage points in 2012. The ministry further highlights that during the next 10-15 years as much as 90 percent of the global economic growth will develop outside EU territory, about one third of which will occur in China.

“The increase of the standards of living in the growing regions results in higher consumption among the population,” the ministry wrote in its material. “Thus the growing regions represent an opportunity for European, and thus also Slovak exporters, and may be a source of economic growth in the EU. The [draft] Strategy of External Economic Relations of the Slovak Republic for 2014-2020 recommends focusing on countries with a higher expected middle and long-term growth of GDP, i.e. China, Brazil, India, Russia and the South African Republic.”

According to the Economy Ministry, the risk of high economic openness is its deep interconnection with the world economy.

“A significant decrease in demand during times of crisis can negatively affect the economic development of an open economy,” the ministry wrote. “In the case of Slovakia the one-sided focus of the territorial structure of exports to EU countries, but especially Germany, means a special risk. In 2012 83.8 percent of Slovakia’s exports headed into the EU, while 21.3 percent went into Germany.”

A high degree of openness is also a common feature of neighbouring countries in the region and is therefore a logical and very natural development, Vladimír Vaňo, the head of CEE Research at Sberbank Europe, told The Slovak Spectator, while even Germany, the biggest economy of the eurozone, reports a rather high degree of openness.

“The major challenge of a highly open economy for policy makers is that maintaining competitive business conditions and an attractive environment for investments is of paramount importance, not only to support economic growth, but also to improve the resilience of the economy against regularly repeating external shocks,” said Vaňo. “Open economies cannot entirely escape the negative consequences of the cyclical weakening of the external demand of their major trading partners, but they can prepare for this regularly repeating development.”

Vaňo believes that a strong and resilient business environment, including a thriving sector of small and medium-sized entrepreneurs, like in Germany, and an attractive investment climate that supports high productivity growth, can contribute to improved competitiveness in a small, open economy and can strengthen its resilience against swings in external demand.

According to Juraj Valachy, the senior analyst at Tatra Banka, Slovakia’s economic openness is primarily a reflection of the country’s geographic size, and simultaneously, its less developed services sector.

“The level of industry in Slovakia is relatively high, but the sector of services, which is linked to the purchase power of the population and the development of companies, still faces a huge expansion,” Valachy told The Slovak Spectator. “Thus we expect that the openness of the economy will decrease over time.”

Why is Slovakia’s economy so open?

The Economy Ministry considers Slovakia’s economic openness to be the result of limited natural resources, low absorption ability of the domestic market and a high number of foreign investors in Slovakia.

According to Vaňo, the inherited geographic and demographic reality that defines the size of Slovakia’s domestic market is behind the economic openness.

“A strong increase of potential output of the Slovak economy between 2001 and 2008 was driven by a strong inflow of FDI, which apart from privatisation and subsequent investments into privatised companies, was also associated with many green-field manufacturing facilities, often serving either all of the CEE market, or in many cases even the entire EU market,” said Vaňo. “Especially new Asian entrants which, in several cases, chose Slovakia as a hub for their EU-wide manufacturing operations.”

In other words, according to Vaňo, the FDI inflow into new green-field projects throughout the previous decade before the recession was dominantly export oriented: these massive investments did not come to Slovakia in order to sell on its domestic market, but to utilise Slovakia’s advantages, especially its location and the good qualifications-to-cost ratio of the labour force, for the establishment of their new export-oriented facilities.

“It was especially during this period of export-oriented FDI inflow when the relationship of a high correlation between the economies of Germany, the eurozone and Slovakia strengthened,” said Vaňo. “Last but not least, one should not forget that even the inherited major industrial facilities in Slovakia, either in the chemical or metal-processing industries, were historically built chiefly as export ventures. For a country the size of Slovakia (or Hungary, or the Czech Republic), a high degree of openness is a relatively natural development.”

Valachy of Tatra Banka believes cites globalisation and specialisation as contributing to the openness of Slovakia’s economy.

“A globalised economy brings requirements to produce goods in large amounts so that it is possible to achieve savings,” said Valachy. “This is why any small country like Slovakia cannot afford to have producers for each kind of good it consumes.”

According to Valachy, when more producers from a similar field come to Slovakia, this further increases specialisation.

Valachy sees the decision to open the country to foreign investors after 2000 as important in that it brought fast economic growth, despite making it more sensitive to global economic swings.

Baláž of Slovenská Sporiteľňa explained that Slovakia’s economy has undergone changes since 1989, while its structure as well as export orientation changed. Moreover, in the early 1990s Slovakia was in a recession and thus many of its producers had to look for clients abroad.

“Instead of the traditional eastern markets, they oriented themselves more towards established EU member countries,” said Baláž, adding that the increase in exports was linked not only with the change in the structure of manufactured products, but also with the arrival of foreign investors into Slovakia. A large portion of their products were exported back to their domestic countries. Links to EU countries further deepened after Slovakia’s entry into the EU and the eurozone, which brought additional foreign investors.”

Ľubomír Koršňák, analyst with UniCredit Bank in Czech Republic and Slovakia, sees Slovakia’s open economy as a natural development because such a small economy cannot be competitive in all sectors due to the lack of production capacities, while production in small volumes would not be effective.
“Along with the removal of trade barriers, especially in relation to European integration, the specialisation and openness of Slovakia’s economy increased,” said Koršňák.

After the economic depression in 2009, Slovakia’s economy resumed its growth due to the revival of foreign demand. Slovakia’s GDP increased by 4.2 percent in constant prices in 2010, a trend that continues today, according to the Foreign Trade Department of the Economy Ministry. During 2010 and 2012 exports grew more than imports, resulting in a growing positive trade balance. In the first 10 months of 2013 Slovakia’s trade balance hit a new record of €4.26 billion. The Economy Ministry expects this trend to continue through 2014, too.

Germany, the Czech Republic, Poland, Hungary, Austria, France, the United Kingdom, Italy and Russia are the most important export territories for Slovak goods. In 2011 Slovakia’s exports to Germany grew the most, up by €2.2 billion, followed by exports to the Czech Republic, up by €1.6 billion. In 2012 it was again Germany, with an increase of €1.8 billion, and Poland up €0.9 billion. During the first 10 months of 2013 Slovakia boosted its exports the most to the UK, up €0.4 billion and Poland, up €0.3 billion.

Within the Strategy of External Economic Relations for 2014-2020, the Economy Ministry elaborated five scenarios for the development of Slovakia’s foreign trade. In one scenario the ministry estimates that foreign trade will reach in 2020 184 percent of 2012’s volume, or €225 billion in prices from 2012. Out of this, exports would account for €124 billion and imports for €101 billion. This accounts for an average annual increase of exports by 8.8 percent and by 6.9 percent of imports. Slovakia should continue to report a positive trade balance, which is expected to increase from €3.6 billion in 2012 to €23 billion in 2020.

The Economy Ministry expects Slovakia will increase its share of exports to Asia and Northern America, and that even though exports to Europe will continue to dominate, they will decrease. Germany, the Czech Republic and Poland will remain Slovakia’s biggest export markets.

The ministry warns that the prognosis does not take into consideration either the departure nor the arrival of large investors in Slovakia, which could in the end significantly affect real trade figures.

“With regards to the small size of [Slovakia’s] economy and the low domestic demand, it is natural that each new large foreign investment affected in a significant way the territorial as well as the commodity structure of the trade,” the Foreign Trade Department of the Economy Ministry wrote in its material. “Equally, the decisions of the dominant exporters and importers, i.e. a relatively small number of companies in the automotive, electro-technical, petrochemical, steel and rubber industry, have a significant influence.”