REPRESENTATIVES of Slovakia, Ukraine’s neighbour, called for diplomatic solutions to the latest escalations of tensions in Crimea after Russia sent its troops to the Ukrainian peninsula in what observers call the biggest crisis between Russia and western countries since the end of the Cold War. 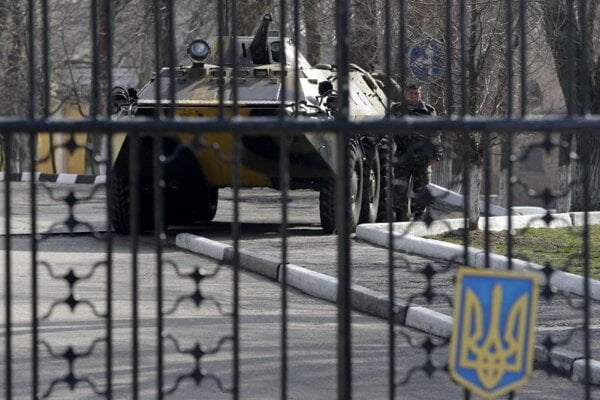 A Ukrainian armored personnel carrier is stationed behind the gate of a military base in the port of Kerch, Ukraine, on March 3, 2014. (Source: AP/SITA)
Font size:A-|A+

REPRESENTATIVES of Slovakia, Ukraine’s neighbour, called for diplomatic solutions to the latest escalations of tensions in Crimea after Russia sent its troops to the Ukrainian peninsula in what observers call the biggest crisis between Russia and western countries since the end of the Cold War.

“We call on all sides for maximum restraint, and for a political and diplomatic solution to the crisis,” said Prime Minister Robert Fico in an official statement on March 1, while Slovakia's Security Council was put on emergency footing, according to TASR newswire.

Slovak President Ivan Gašparovič said that any problem can be solved through diplomacy, while he called on the involved parties to refrain from the use of weapons.

Yet, 14 Slovak foreign policy experts called for a clearer and more decisive attitude from Slovak officials in declaring support for Ukraine.

One day later, Fico offered Slovakia’s participation in the mission to Crimea, which in his words “could help very much”. He also stressed that with the developments in Ukraine, for Slovakia the most important are its “national-state interests”, while adding that the government is first following the situation along the Slovak-Ukrainian border where, according to the Slovak PM, the situation is currently calm.

Yet, Fico has also confirmed that protection at the borders might be fortified to protect Slovakia from what he called uncontrolled passage of migrants or the arrival of people who are engaged in Ukraine in different types of crime.

“Currently it is important that by this increased activity we are able to protect the Slovak-Ukrainian border from illegal migration and the arrival of unwanted elements to the territory of Slovakia,” said Fico, as quoted by SITA newswire on March 2, with Interior Minister Robert Kaliňák confirming that over the past couple days there was only one attempt to pass through the green border.

Slovakia has not yet recorded an increased number of applications for Slovak visas from Ukraine, SITA reported.

Vladimír Baláž, chief researcher at the Institute of Prognostics of the Slovak Academy of Science (SAV), explained that if the conflict in Ukraine is to last several months or even years, or if Ukraine ends up on the verge of bankruptcy, Slovakia could expect the rather low numbers of Ukrainians who are currently in Slovakia to increase.

“The main influx would be captured by Poland, and paradoxically partly also Russia, but certainly a couple dozens of thousands of migrants would also come to Slovakia, for which we certainly are not prepared,” Baláž told The Slovak Spectator.

Slovakia will take in approximately 20 Ukrainians who suffered injuries during the demonstrations, while the country is ready to accept a couple hundred migrants in areas located close to the borders, Fico said on March 2.

Meanwhile, 14 Slovak experts in international politics called for a more unambiguous stand on the crisis from Slovak officials.

Slovakia should clearly declare its interest in Russia ending its military build-up and clearly state that Russia’s intervention is unacceptable, said 14 foreign policy experts in their joint declaration issued on March 3. The country should also participate in the joint strategy of the countries of the European Union and NATO, which will be to solve the consequences of the Russian intervention and its impact on Europe and the citizens of Slovakia.

“We regret that the official stance of Slovakia so far is falling behind our neighbours in the region in its promptness and unambiguousness,” said the statement signed by Jozef Bátora,
Vladimír Bilčík, Martin Bútora, Alexander Duleba, Balázs Jarábik, Milan Ježovica, Marian Majer, Juraj Marušiak, Milan Nič, Jaroslav Naď, Róbert Ondrejcsák, Milan Šuplata, Peter Terem and Róbert Vass, as reported by TASR. “We are certain that Slovakia should declare its solidarity with Ukraine clearly and without any delay in close coordination with our closest allies and partners.”

The analysts at the same time condemn the solution Russia has chosen in Crimea.

“Such action seriously violates the principles of existing international order and the sovereignty of Ukraine,” the analysts said, adding that Slovakia, having learned from its experience in 1968 when it was invaded by Soviet-led Warsaw Pact forces and the subsequent decades of occupation and normalisation, must not close its eyes to such actions by Russia.

Róbert Ondrejcsák director of the Center for European and North-Atlantic Relations, an NGO focusing on international issues, said that Slovakia must declare that it cannot accept military operations on the territory of its neighbouring state or occupation of part of the Ukrainian territory.

“It is in direct contradiction with our most important values as well as our strategic and security interests,” Ondrejcsák told The Slovak Spectator.

According to Ondrejcsák, Ukraine’s security is inseparably linked with the safety of the central European region.

“Any threat to Ukrainian security, sovereignty and stability will have long-term negative consequences for our security, while our neighbourhood becomes destabilised, and a long-term freeze and hard-to-solve conflicts will be created, while on the territory of a neighbouring country a significant Russian presence will emerge,” Ondrejcsák said.

Indeed Slovakia’s most important interests in Ukraine involve energy, Fico said on March 2, adding that Slovakia has not recorded any problems with supplies of gas from Ukraine so far. Slovakia currently has 1.77 billion cubic metres of gas in its storages, which according to Fico, should be enough for four months if supplies were to be cut, SITA reported.

Former military attaché of Slovakia to Ukraine Vladimír Suchodolinský, who under the government of Iveta Radičová also served as deputy director of the Military Intelligence Service, said in an interview with the Sme daily he believes that an eventual military conflict would result in a huge number of refugees fleeing to Slovakia.

Yet, Suchodolinský assumes that even if there is a military conflict, it would end rather soon and would not occur near the border with Slovakia. However, he also added that even if Slovakia’s borders were not threatened by a war, “we are dependent on raw energy materials that flow to Slovakia through Ukraine. No one can guarantee that the gas and oil pipelines will be functional”, Sme reported on March 3.

Ukraine’s international ratings were at CCC, which is just a step away from bankruptcy, Baláž said, adding that unless quick and substantial help from international institutions like the International Monetary Fund (IMF) is provided to Ukraine, the country might really go bankrupt.

Slovakia’s trade with Ukraine represents 1 percent of the total exports, Baláž said, adding “thus, the direct impacts were not that significant”.

According to Baláž, Slovakia might have problems with supplies of ore or coal but it could still somehow offset this shortage.

“I would see rather danger in the fact that the markets react nervously to every bankruptcy,” Baláž told The Slovak Spectator, adding that Ukraine is a relatively large country with over 40 million people, and if such country goes bankrupt then all emerging markets would become suspicious of the markets, which means that the risk of surcharges there start increasing.

Slovakia is no longer an emerging market, but investors might consider it not stable enough, for it is a small country and thus the risk in surcharges might increase.

The mission of the V4 ministers was endorsed by the EU High Representative for Foreign Affairs, Catherine Ashton. The ministers recommend that the EU sign the Association Treaty and a Free Trade Agreement with Ukraine, Lajčák has told TASR.

Lajčák stated that he does not underestimate the possible impact of such a step on Ukrainian-Russian relations. He said that talks need to be held with Russia in order to prevent any misunderstandings and tension.

Slovakia sent humanitarian aid to Ukraine on board the plane Minister Lajčák took to Kiev, mainly medical supplies, worth €12,000. The supplies were delivered to the Ukrainian Red Cross, who will distribute it among the health-care facilities in the country. Slovakia also offered Ukraine the possibility to use its rehabilitation facilities for 20 of the protesters who suffered lighter injuries or endured trauma.

The Foreign Ministry published a call for applications on February 28 with projects to aid Ukraine. The call focuses on the building of a civil society, cooperation of the governmental and non-governmental sectors, a market environment and support of small and medium-sized enterprises.