THE FJÚŽN (Fusion) multicultural festival, exploring the cultures of “new minorities”, as well as their contributions to Slovak society, has already become a traditional spring event in the capital. The festival’s 9th edition, starting in mid-April, will focus on immigrants - their search for a new life and their forms of cultural expression, and will take place at the KC Dunaj and other venues. 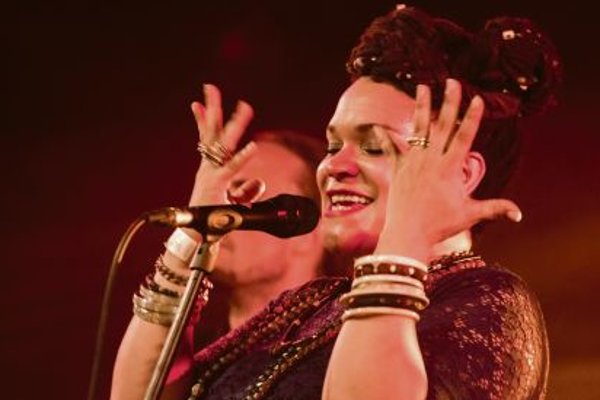 THE FJÚŽN (Fusion) multicultural festival, exploring the cultures of “new minorities”, as well as their contributions to Slovak society, has already become a traditional spring event in the capital. The festival’s 9th edition, starting in mid-April, will focus on immigrants - their search for a new life and their forms of cultural expression, and will take place at the KC Dunaj and other venues.

The theme this year is Susedstvá (Neighbourhoods), and for the first time the festival will feature performers from all Visegrad Four countries: Slovakia, the Czech Republic, Poland and Hungary. Attendees will get to see Teatro Novogo Fronta and W.W.W. from Prague (dance groups in the Elledanse theatre house), singers Sena Dagadu and Ifi Ude.

Ude was born in Nigeria but moved to Poland with her family when she was three. Recently, she was nominated for the prestigious Fryderyk Prize in the category Debut 2014, the Polish Institute in Bratislava writes on its website. “She draws from her African roots and combines various genres, from existential minimalism to hypnotic trance,” the PI informs. She released her eponymous debut album in 2013.

Another festival headliner is Sena Dagadu, born in Ghana, who began her career as a singer in 2001 in Budapest. She released her first album, Sena First One, in 2003, with hip-hop troupe Gimmeshot Crew. In Bratislava she will present her second album, Lots of Trees. Since 2005, she has been singing with the Irie Maffia band, whose DJ Elo will perform after her gig on April 16.
The Slovak Spectator approached them via email.

The Slovak Spectator (TSS): Do you feel closer to your native or your adopted cultures? What are the biggest differences and similarities between the cultures?
Ifi Ude (IU): I was born in Nigeria, but raised in Poland. I definitely feel more Polish than Nigerian, although I do my best to keep this connection to make sure that my African spirit in me will not be extinguished. I cook African dishes, I’m up to date with the political situation in Nigeria, I keep in contact with my Nigerian family. Polish media often describe me as an “African soul with a Polish heart”. What I perceive as common for both: value of the family and passion for feasting. And the biggest differences: the approach to music and cuisine.
Sena Dagadu (SD): My mother is Hungarian, my father is Ghanaian. I was born and raised in Ghana, however my mother made sure we spoke Hungarian and knew our Hungarian culture and heritage; so we did visit Hungary on a few occasions and kept contact with our family here. And so in fact when I moved to Hungary in 2001, I was not a stranger to the language, culture and people.
As for similarities, I do believe that especially in the rural areas, it is the friendliness and hospitality. When you arrive even as a stranger in someone’s home, you are invited to eat, drink and share your story. I find the same happens in Ghana, too. The major difference would be perhaps the history and conditioning, the way we were brought up, the food, education system and a number of other things.

TSS: How does your background influence your work?
IU: Polish is my first language. I have a master’s degree in Polish philology. I learned English at school like others. Unfortunately, in my family I had nobody who could teach me Ibo – the language of my tribe. Thus, I am learning it online.

SD: For me to answer how my life affects my work is like trying to put two kilos of potatoes in a one kilo bag. I have lived in Budapest since 2001, and started to make music in 2002. In fact, my background growing up in Ghana, surrounded by music, taught in English, etc, made my transition into the music scene rather easy. However, had I been living in Ghana, I would have found another way to do what I am doing, maybe slower, faster or just different, but I would have still found a way.

TSS: What is the best way to present minority cultures to the majority culture?
IU: This is typically an anthropological subject; I also have a master’s degree in cultural studies. Minority cultures should be praised for the way they perceive reality, for their typical bond with nature and people, for their cuisine, their way of dressing and musical rarities – all of their cultural richness.

SD: Well, here, in the first place, the language is the biggest barrier. Hungarian is an incredible language that takes time, patience and skill to master and because of this, foreigners have a hard time adapting. Also perhaps even because of the complexity of the language, there is a certain humour and communication quirkiness in Hungary that I think only Hungarians understand. You have to be very attentive to learn this way of communication, the do’s and dont’s of society.
But in general, I think there are a vast number of Hungarians who … easily share their culture and knowledge, so in fact it is not always so difficult to find friends in the cities. However, one always has to walk with eyes open as a stranger in another man’s land.

TSS: Do you have knowledge about the so-called “new minorities” with their big-gest challenges, complaints and advantages?
IU: There are more and more new minorities. It’s exciting to look at them, depending on the specifications. From a sociological point of view, these are the homosexual minority, [and] religious, ideological, political, etc., [minorities]. Poland is struggling with the issue of [their] acceptance. But over time, the country will have to adapt to progressive change and accept more and more sociological and cultural diversity.

In addition to concerts and dance performances, Fjúžn will also include theatre stagings, film screenings, debates, ethnic cuisine, creative workshops and informal meetings, Martin Brix informed for festival organisers, the Martin Šimečka Foundation. Fjúžn will also offer events for children, a puppet-theatre play of the Bábkové Divadlo na Rázcestí from Banská Bystri-ca, a seminar on migration in the V4 countries, the Susedia na Dvore (Neighbours in the Courtyard) meeting and more. Full information can be found on the website fjuzn.sk.