ONLY 13.05 percent of Slovak voters cast their vote in the elections to the European Parliament (EP) remaining true to the country’s reputation of posting low turnouts since joining the European Union in 2004. 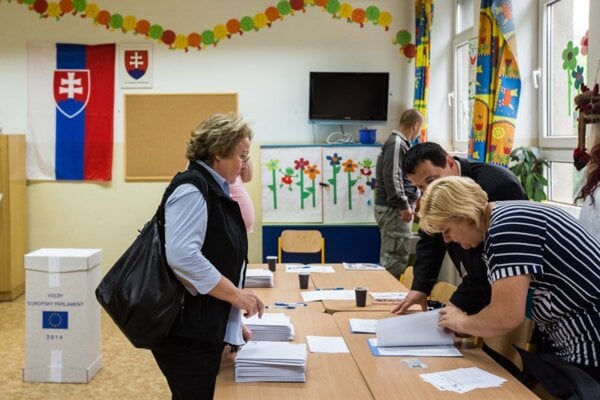 Only 13.05 percent of Slovak voters cast their vote in the elections to the European Parliament. (Source: SITA)
Font size:A-|A+0

ONLY 13.05 percent of Slovak voters cast their vote in the elections to the European Parliament (EP) remaining true to the country’s reputation of posting low turnouts since joining the European Union in 2004.

Pundits are citing election weariness, as voters had already voted in two rounds of presidential elections, and the generally negative tone of some candidates as reasons behind the lowest turnout Slovakia has ever posted in EP elections.

“It cannot be called by other name than catastrophe,” political scientist Martin Klus told the TASR newswire.

The ruling Smer party received the highest number of votes in the May 24 election to the EP but Prime Minister Robert Fico’s party has failed to defend its five mandates, according to the official results published by Slovakia’s statistics authority.

Smer with its 24.09 percent, will take four of Slovakia’s 13 seats in the European Parliament. EU commissioner Maroš Šefčovič, Monika Flašíková Beňová, Boris Zala and Vladimír Maňka will head to the EP.

The Christian Democratic Movement (KDH) harvested 13.21 percent of the votes, thus sending two deputies, Anna Záborská and Miroslav Mikolášik, to the EP, according to the official results.

The Slovak Democratic and Christian Union (SDKÚ) got 7.75 percent of the vote and will have two mandates in the EP as well and thus Ivan Štefanec and Eduard Kukan will join the EP.

Other parties will have one mandate each. The Ordinary People and Independent Personalities (OĽaNO) received 7.46 percent and will send Branislav Škripek to the EP. The coalition of NOVA, the Conservative Democrats of Slovakia (KDS) and the Civil Conservative Party (OKS) collected 6.83 percent and its one mandate will go to Jana Žitňanská. Freedom and Solidarity (SaS) picked 6.66 percent of the vote and Richard Sulík will take the mandate. The non-parliamentary Party of the Hungarian Community (SMK) got 6.53 percent and will send Pál Csáky to Brussels and Most-Híd collected 5.83 percent of the vote while its mandate will go to József Nagy.

Is Smer the winner?

While local media reported that Smer won the elections to the EP given its 24 percent support, president of the Institute for Public Affairs (IVO) Grigorij Mesežnikov suggested that the centrist and right-wing parties grouped in the European People’s Party won the elections, according to the SITA newswire.

“Stagnation of Smer can be observed, evidently Smer is no longer strengthening,” Mesežnikov said, adding that the fragmentation of the centre-to-right parties has been confirmed as well.

Klus agrees with Mesežnikov that the results does not reflect the real strength of political parties.

“The cliché that Smer has disciplined voters has been broken,” Klus said, as quoted by TASR.
Yet, Klus also suggests that Smer compared to 2009 has dropped also in terms of voter’s support and thus it cannot consider the elections a success.

Vladimír Maňka of Smer, who will be an MEP, suggested that Slovakia most probably will have posted the lowest turnout in the whole European Union.

“It is necessary to give a thought to what to do for higher turnout, because the low turnout is a result that everyone shares; politicians and media as well,” Maňka said, as quoted by SITA.

Without being more specific, Maňka also said that it bothers him that also people from non-standard political parties have made it to parliament where they will operate as independent deputies.

“Deputies from standard political parties always worked from improving the life of citizens,” Maňka said, adding that those who will not have this agenda will only shout how everything is wrong.

Mesežnikov attributes the low turnout to critical comments by some candidates about the EU, adding that it is harder to motivate people to go to the polling stations if critical voices prevail, SITA reported.

However, the low turnout also might be attributed, according to Mesežnikov, to election weariness since two months ago Slovakia had two rounds of presidential elections.

When pondering the reasons behind the low election turnout, Klus said that more intense media reports from the operation of the EP would not solve this chronic problem. The political analysts also suggests that the elections should be personalised, because “the current system benefits only the political parties’ headquarters”, adding that people might have been repelled that they could not combine their preferential votes on different election ballots, TASR reported.

In Slovakia, voters can select two candidates from a party’s slate. A party is successful if it gets at least 5 percent of the ballots cast.

“In Lithuania the elections to the EP took place simultaneously with the presidential elections, why cannot we join the votes,” Klus asked.

Still Slovakia regularly posts low turnout for EP election. In 2009 only 19.64 percent of the voters came out to vote, even fewer – 16.96 percent – took part in the country’s first ever European elections in 2004.

KDH deputy Anna Záborská suggested that voters who prefer Christian values have been mobilised in the elections, probably because they are aware of what Záborská called the “crossroad of values”. According to her, KDH preferred personal contact mainly with people in areas where the KDH is traditionally strong, TASR reported.

“KDH can talk about a very good result, they went high above their preferences, while the SDKÚ can literarily speak about reincarnation; two mandates were really not expected,” said Klus, as quoted by TASR.

SDKÚ Chairman Pavol Frešo promptly interpreted the results of his party as what he called increasing trend of trust of the voters since the term of the new leadership of the party, according to SITA.

“It is another defeat of Smer, but also a chance for the right wing to create an alternative,” Frešo said.

According to Klus, the extremely low turnout benefited parties such as SaS and OĽaNO adding that in the polls these parties have lower support, but they probably managed to more effectively mobilise the electorate than other parties.

SaS leader Richard Sulík, who ran a campaign critical of the EU, commented on the unofficial results that these are a confirmation that his party has its justification on the political scene.

Branislav Škripek of the OĽaNO said that Slovakia clearly said that it cares about conservative values by the way it voted. He also said he is glad that most of the 13 deputies are conservative, according to SITA.

Jana Žitňanská of the non-parliamentary NOVA interpreted the unofficial results of the EP vote as a success because no other party from outside the national parliament performed this well, SITA reported.

The non-parliamentary SMK performed better in terms of the number of citizens’ votes than Most-Híd, which made it to the parliament in 2012, while Pál Csáky of the SMK called this development a positive surprise. In the previous term, SMK had two deputies in the EP, but those elections took place before the split of the SMK, which gave birth to Most-Híd.