DESPITE numerous commemorative events and memorials to remember the victims of the Second World War, Slovakia and the Czech Republic have until recently lacked a permanent memorial which would express the thanks of the United Kingdom for their contribution in the war. Not any more. 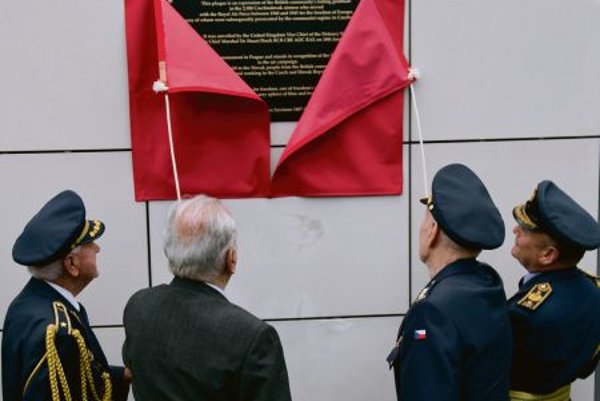 DESPITE numerous commemorative events and memorials to remember the victims of the Second World War, Slovakia and the Czech Republic have until recently lacked a permanent memorial which would express the thanks of the United Kingdom for their contribution in the war. Not any more.

By way of explaining the initiative, Andrew Shepherd, British defence attaché to the Czech Republic and Slovakia, noted it would help honour 2,500 Czechoslovak airmen who joined the Royal Air Force (RAF) during the war and fought in the Battle of Britain. The British community in the Czech Republic and Slovakia collected enough money to unveil two memorials: one in Prague on June 17 and one in Bratislava on June 18.

“It is a real contribution to the role of Czechoslovaks since we were all fighting for one: to defeat Nazism and to be able to return to our freed homeland,” Brigadier General Milan Píka, one of the veterans who fought in RAF, told the press on May 21.

The initiative to erect memorials began about 18 months ago, with the fundraising launched at the beginning of this year. In one month the British community raised €120,000.

“This shows the sentiment felt by the British community towards the Slovak and Czech airmen who fought during the Battle of Britain,” Euan Edworthy, owner of Prague-based PR agency Best Communications and one of the initiators of the project, told The Slovak Spectator.

The money was used to organise two events and unveil two memorials: a winged lion in Prague and a plaque in Bratislava. Shepherd explained to the press that the main focus was on Prague since during the war it was the capital of the country. This, however, does not undermine the contribution of the Slovaks in the fights, he said.

Some of the money raised will also go to the Prague-based Sue Ryder Home for seniors that is closely connected to the RAF and the airmen’s widows, Shepherd said.

The importance of memorials

Accompanied by three veterans, Píka, Brigadier General Emil Boček and Major Alois Dubec, the Bratislava plaque was unveiled by Sir Stuart Peach, a senior RAF officer. He described the ceremony as “cementing the friendship between the two countries”.

The June 18 ceremony featured the performance of the RAF Central Band and a fly-over by a Spitfire, which the organisers called a highlight of the event.

The plane was carrying the initials of Otto Smik, a famous Slovak pilot who died in 1944 in the fight above the Netherlands. Shepherd said that the design of the plane will stay this way for the next two years, as the plane appears at various air shows across Europe.

It is very important for all generations, particularly future ones, to remember “the sacrifices that were made for all of our freedom from fascism”, Gill Fraser, chargé d’affaires of the British Embassy to Slovakia, told The Slovak Spectator.

In this respect, she mentioned the remembrance of British pilots who died when liberating Bratislava in the Second World War that takes place every October in Čunovo, near Bratislava. She was touched by the number of schoolchildren that attended the event, which according to her shows that they really understand such sacrifices and “will continue to show their thanks and their understanding”.

According to Píka, it is important to find a way to present this part of history that is interesting to younger generations.

“We must be proud of what we have done,” Píka told The Slovak Spectator.

Also Shepherd admitted that “keeping the story alive” was part of their objective when starting the fundraising. He explained that they deliberately chose the Eurovea building to hold the plaque as there is a bigger chance that passers-by will notice it.

“Hopefully, it will prompt a few questions and they can learn more about what the airmen did,” Shepherd told The Slovak Spectator.