ELECTRIC cars are quiet, fast, inexpensive to operate and environmentally friendly, yet only 70 of them are registered in Slovakia. Observers say this is mainly due to poor infrastructure, the cars’ high price tag and a lack of promotion. However, the new “interconnection” between western and eastern Slovakia completed in May, with 15 publicly accessible, fast charging stations, could help boost interest in electric cars. 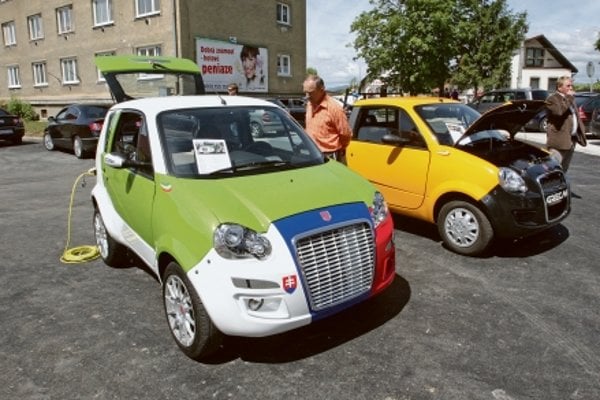 Electric cars can even be charged at home. (Source: SME)
Font size:A-|A+0

“This is a historic moment for Slovak electro-mobility, since as of today you can travel in an electric vehicle from Bratislava to Košice without restrictions,” Peter Badík, the director of GreenWay Operator, which built the network of charging stations, told the press.

On the other hand, after the firm announced the completion of the network, several journalists drove across the country in electric cars to test it out. They confirmed that the network is functional, but called it an “adrenaline adventure”, since several complications arose, particularly long recharging times and a short driving range, revealing some of the disadvantages of electric cars.

However, the current network of fast charging stations was not created with long trips in mind, but rather as a message to drivers that Slovakia, the state with the most complex network of charging stations among all post-communist countries, is prepared for electric cars, according to Badík.

“I see it as assurance,” Badík told The Slovak Spectator. “People, don’t be afraid; there is some basic infrastructure and if you buy an electric car and use it you will already have a network you can rely on.”

To drive from Bratislava to Košice using GreenWay Operator stations, people first need to have cars with compatible connectors. The most common quick charger in Slovakia is the CHAdeMO, used, for example, by the Nissan Leaf, Mitsubishi’s i-MiEV, Citroën’s C-Zero and Peugeot’s iOn. On the other hand, BMW i3, a Volkswagen e-up! or electric cars made by Renault use different connectors. Secondly, electric car drivers need to allow themselves plenty of extra time, the Auto žurnál automotive monthly wrote in mid July 2014.

“We confirm that it is truly possible to drive from Bratislava to Košice and vice versa by electric car,” Auto žurnál wrote. “However, it is a rather more adventurous ride than an ordinary business or family trip, and it will take a lot of time.”

While the drive from Bratislava to Košice usually takes around five to six hours, a journalist from Auto žurnál spent more than 10 hours on the road due to time spent recharging the battery. The station is programmed to charge the battery at a maximum of 45 minutes, which is around 90 percent of the battery’s life. However, it takes just 20-25 minutes to charge a battery to 80 percent. Moreover, despite the fact that most charging stations are placed close to the highways, some are located further away in towns or cities, thereby increasing the length and time of the drive.

The stations are placed at a distance of 32-85 kilometres from each other, according to the Pravda daily, which means there is a chance that a car whose battery is not fully charged may not make it to the next station.

“I am starting to get used to that adrenaline [rush],” said Michal Karpat from the private TA3 TV news channel, after he made it to a station with only a 14-kilometre reserve.

The test drives highlighted several disadvantages of electric cars, but the current charging station network was not intended for cross-country trips, but for people driving short distances within or between towns and cities, according to Badík.

“We are not saying that people should travel from Bratislava to Košice and vice versa once per week,” Badík said. “Don’t push [the use of] electric cars where it doesn’t belong.”

GreenWay Operator intentionally built the stations close to the highways, but also in cities and towns where they can benefit drivers of electric cars, according to Badík.

Badík agrees that the driving range of electric cars is currently relatively short, explaining this is a result of car producers’ attempts to balance the driving range with battery size, the price of the cars, the quality and so on. However, the driving range should improve within five years as there are several technologies that are ready to be introduced to the market, said Badík.

“We can see that optimistically all the disadvantages can be resolved and after some time we will forget that they ever existed,” Szöllös told The Slovak Spectator.

Badík sees the problem of the various types of connectors as a “war of standards”, which could be seen in the past in various types of mobile phone chargers. Szöllös pointed out that the European Union agreed with car manufacturers to have just one connector by 2017.

“Until then, we need to deal with it,” Szöllös said. “It significantly complicates the construction of charging stations, but I hope that common sense will prevail.”

Improving infrastructure for electric cars is important since without it people would be unwilling to buy electric cars, according to Boris Peško, the spokesperson for Východoslovenská Energetika (VSE), an energy company that runs and has helped construct seven charging stations around Slovakia.

At the beginning, environmentally conscious firms bought electric cars, and then wealthy people started wanting limousines made by electric car producer Tesla. A third wave came with electric vans, since they are used so often that the money saved on fuel outweighs the high price of the vehicles.

Currently, electric cars in Slovakia are also used for food delivery and in the police fleet, Peško said.

For example, the firm Stredoslovenská Energetika (SSE) has been using five electric cars since 2011 and created several internal charging stations for its employees with the aim of being environmentally friendly. It evaluates positively the savings on fuel, zero production of emissions and the low noise level. In 2013 SSE lent some of its electric cars to police in Zvolen and Banská Bystrica for one year to show their potential to public, SSE spokesperson Jana Bolibruchová told The Slovak Spectator.

Západoslovenská energetika (ZSE) used five electric cars in 2012 and 2013 in the region along the Slovak-Austrian border, proving that the driving range of electric cars is sufficient in cities, ZSE spokesperson Michaela Dobošová told The Slovak Spectator.

Electric cars are unpopular not only because of their current shortcomings, but also because of poor promotion. Car producers normally spend huge amounts of money promoting their cars and if they decide that they are not interested in selling electric cars in Slovakia, the number of customers will naturally be low, according to Badík.

“Every car costing more than €20,000 is an emotional decision, not a rational one,” Badík said, adding that without sufficient promotion targeting customers’ emotions, even the biggest selling cars would not do well.

Moreover, the government has not created the proper conditions to facilitate electro-mobility in Slovakia and does not support charging stations or the selling of electric cars. Slovakia is one of the few countries in the EU to almost completely ignore this issue, Jaroslav Holeček, the head of Slovak Automotive Industry Association (ZAP), told The Slovak Spectator.

There is no direct or indirect support, benefits or allowances for electric car users in Slovakia and the country is now preparing a strategy related to them. The Economy Ministry has prepared a national strategy for developing electro-mobility, which is awaiting discussion by the cabinet, Economy Ministry spokesperson Dagmar Hlavatá told The Slovak Spectator.

Municipalities have plenty of tools to promote the use of electric cars, such as free parking in towns and city centres, battery charging stations, the right to use bus lanes or allowing electric cars to enter areas that are off-limits to regular vehicles, according to Peško.

Badík agrees, adding that to improve the public’s awareness of electric cars, the state should take specific steps, like building charging stations and educating people.

“Education is exactly what the third sector and the state should do,” Badík said. “Many people don’t even know that an electric car can be charged at home.”