THIS POSTCARD from 1921 could easily be titled ‘The Master and His Work’. The man on horseback appears to be a member of the Czechoslovak Legion, whose soldiers in 1919 destroyed the north-western span of the bridge that connected the southern-Slovak town of Párkány (now called Štúrovo) with the Hungarian city of Esztergom. 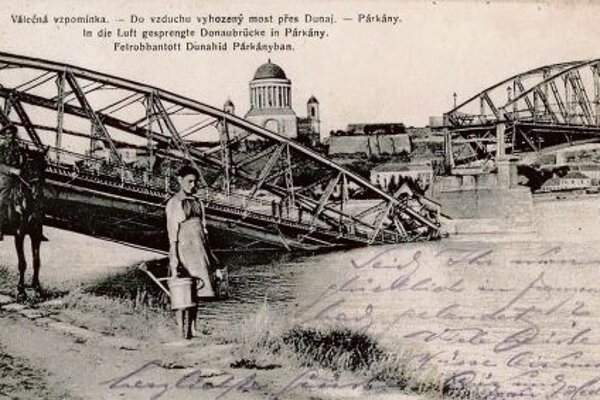 In earlier times, Ugrian soldiers might have posed on this spot after destroying a bridge that had been built there by the Ottomans from besieged Esztergom. The Ottomans connected the southern bank, which they controlled, with the northern bank, controlled by the Ugrian army.

Párkány was, however, also held by the Ottomans, and this was the main reason why they built a bridge here in 1585. That bridge stood until 1683, when it was destroyed in a battle for control of the town. Revolutionary soldiers who demolished the “flying bridge” in 1762 would surely also have liked to have posed near the bridge for such a picture.

The bridge in this postcard was built in 1895 and named after Marie Valerie, the daughter of Emperor Franz Joseph. It is not surprising that the Czechoslovak units destroyed the bridge, as at that time the fighting in southern Slovakia was particularly intense. Less than a year after the end of World War I, Hungary attempted to regain the territory it lost to the newly formed Czecho-slovak state. The Párkány span was built again after the situation had calmed down in 1927. And finally, let us not forget the pyrotechnicians of the German Wehrmacht, who blew up the entire bridge in 1944. For the next half century, only the pylons remained until 2001, when the bridge was finally rebuilt.