THE CHEAPEST energy is that which does not need to be generated. But reduction of its consumption or increasing energy efficiency has a price tag too, with benefits that may not come until down the road. Buildings offer the biggest opportunity for reducing energy consumption. And while Slovakia is late in transposing the related EU legislation, it has prepared its third Action Plan of Energy Efficiency setting targets for years to come. 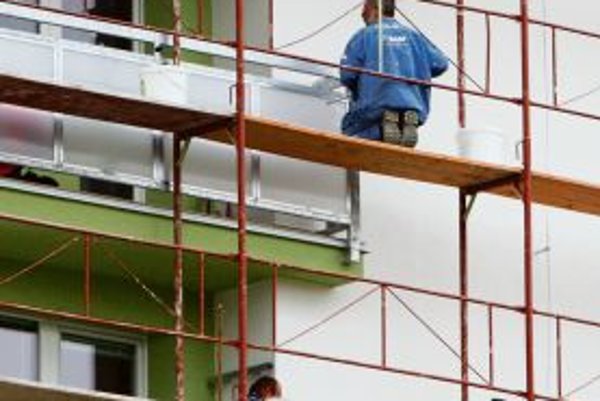 THE CHEAPEST energy is that which does not need to be generated. But reduction of its consumption or increasing energy efficiency has a price tag too, with benefits that may not come until down the road. Buildings offer the biggest opportunity for reducing energy consumption. And while Slovakia is late in transposing the related EU legislation, it has prepared its third Action Plan of Energy Efficiency setting targets for years to come.

“As much as 60 percent of energy savings between 2011 and 2013 in Slovakia were achieved thanks to renewal of buildings,” Kvetoslava Šoltésová and Sylvia Pálková of the Slovak Innovation and Energy Agency (SIEA) write in their Energy Efficiency of Buildings in the Centre of Attention material. “Measures in the public sector, which are also to a significant extent related to improving energy efficiency of buildings, brought savings making up 10 percent of the saved energy.”

All energy-saving measures carried out in Slovakia between 2011 and 2013 cost €6.9 billion, according to the Economy Ministry. While the costs were by €2.4 billion higher, energy savings amounted to 6,727 terajoules (TJ) of final energy consumption making up roughly 81 percent of the plan. Buildings accounted for the biggest energy savings, 4,055 TJ, while they swallowed up the biggest portion of investments costs, €3.72 billion. In both cases this was above the plan when costs were projected at €1.08 billion and energy savings at 1,754 TJ.

In other categories energy savings’ targets were not reached while investment costs were behind the plan as well. The industry sector invested almost €90 million, well below the planned €316 million. The realised measures brought savings of 1,069 TJ instead of the planned 2,490 TJ. The public sector spent €373.6 million compared with the planned €675.6 million which brought savings of 659 TJ instead of the plan of 2,234 TJ. In transport the costs of €2.14 billion almost amounted to the plan of €2.29 billion, while savings were by 621 TJ, lower than the plan of 899 TJ. In the category of appliances the costs were at €129.9 million, bringing energy savings of 668 TJ while, the plan was to spend €160.8 million and save 985 TJ.

In a comparison of costs and savings, Šoltésová and Pálková point out that while the above figures provide a basic image of how much money is invested, they cannot be put in direct relation with energy saved as many of the results are longer term.

“Buildings by their operation make up as much as 40 percent of the total energy consumption of the EU,” writes SIEA. “This information has been accompanying to a significant extent many discussions but also decisions about what can be done for the reduction of energy consumption for more than two years. With regard to the real conditions of most heated objects in Slovakia it is exactly the operation of buildings which provides a significant space for energy savings.”

It referred to the far-from- optimal conditions of buildings in Slovakia when their maintenance and renewal is late or absent.

“Energy efficiency is currently at the centre of attention, but in renewal of buildings Slovakia has a huge investment debt and many other problems, which it is necessary to solve concurrently,” Šoltésová and Pálková wrote.

The category of transport counts on investments of €3.87 billion with savings in the final consumption by 576 TJ and in reduction of primary energy sources of 901 TJ.

“The best and the cheapest energy is that which was even not needed to be generated,” Jozef Badida, analyst with the energieportal.sk website dedicated to energy told the Hospodárske Noviny daily.

“The development is positive,” said Marcel Lauko, director of the non-governmental organisation Energy Centre Bratislava (ECB). He linked this with the establishment of foreign companies, which bought existing companies in Slovakia and implemented measures increasing energy efficiency.
Lauko sees the instability of the business environment as the biggest challenge for improving energy efficiency.

“Companies do not have certainty of some volume of future revenues and thus mostly, when going into some measures, then these measures are either low-cost organisational ones or measures with a very short return of investments,” said Lauko. “It is impossible to expect from firms that under existing uncertainty they will go for a measure where the return is longer than three or four years.”

If companies are able to implement measures requiring higher investments and bringing longer returns of investments, they can experience bigger energy savings, he said.

Slovakia is one of 24 EU member countries that have failed to implement the Energy Efficiency Directive of the European Commission, against which European regulatory authorities have begun proceedings. The goal of the directive is to reduce energy consumption 20 percent in Europe’s annual primary energy consumption by 2020. While the deadline for transposition was June 5, 2014, the Slovak parliament advanced the respective draft legislation to the second reading on September 10. The passage of the draft is planned for October, while the new Energy Efficiency Act should become effective as of the beginning of 2015.