TWO Slovaks, Štefan Klein and Juraj Vaculík, showed the world how passenger transport will look in the future while presenting their AeroMobil at the Pioneer Festival in Vienna on October 29. Their project was a sensation and drew the attention of media from all around the world. 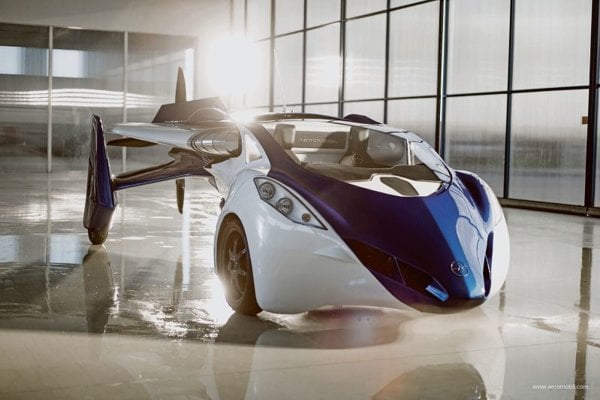 TWO Slovaks, Štefan Klein and Juraj Vaculík, showed the world how passenger transport will look in the future while presenting their AeroMobil at the Pioneer Festival in Vienna on October 29. Their project was a sensation and drew the attention of media from all around the world.

“With its sports car cockpit and dragonfly wings that fold in neatly behind the cabin, it looks like something straight out of the Batcave or Q’s secret laboratory,” The Guardian’s Philip Oltermann wrote. “But the creators of AeroMobil’s Flying Roadster insist their innovation is more than just a boy’s toy dreamt up by science fiction fans.”

The AeroMobil 3.0, which combines a car and a plane with two seats, has a maximum flight speed of 200 kilometres an hour and a range of about 700 km, with a consumption of 15 litres of fuel per hour. On the ground, it can reach the speed of 160 km/hour and it needs eight litres of fuel per 100 kilometres, according to its official webpage.

The vehicle can use ordinary airports, but it can also take off or land on any stretch of grass or solid surface, needing about 50 metres for landing and 200 metres for taking off.

So far, the project has been financed from personal sources, particularly from Vaculík’s own pocket, according to the TASR newswire.

Co-founder and chief designer of AeroMobil, Klein, has been working with the flying car concept for 25 years after he brought the child’s dream about a flying car back to life in his final thesis as a student of design at the Academy of Fine Arts in Bratislava. He later joined forces with his partner Vaculík, who is now CEO of the company.

“But the main inspiration for AeroMobil was freedom,” Štefan Vadocz, CCO at AeroMobil, told The Slovak Spectator. “During the Cold War the airplane was a symbol of freedom and one of the means of getting over the Iron Curtain.”

Preparing for the market

Currently, the team is completing the final documentation for the prototype AeroMobil 3.0, using the feedback from the testing of AeroMobil 2.5. The prototype will undergo necessary modifications, particularly of used material, not those of a conceptual nature.

“Our ambition is to create the perfect product,” Vaculík told the Hospodárske noviny daily. “What we are showing today is one of our milestones on the road towards the finish; we do not consider this as a final product.”

The prototype AeroMobil 3.0 is to be tested in the ultralight category. After the testing of the AeroMobil 3.0 version that proved the ability of the prototype to operate in road traffic and also in the air, the certification process will begin.

“To really approach customers and sell our machine we need to go through two certification processes,” Vaculík told TASR. “To get a certificate for the car, and certify it as an airplane too.”

According to Vadocz, AeroMobil representatives also consider their market strategies, realising that there is a clear need among countries that lack infrastructure for cars and have legislation ready. There are also countries which have strong sport and private pilot populations which they consider to be very interesting market segments as well.

“The first AeroMobil will be a high-end luxury product combining a high performance car and a full-fledged small aircraft, produced in a limited edition,” Vadocz said. “As for the next product, we will be sure to bring it within reach of the top end of the mass-market.”