ZUZANA Pechočiaková, a doctor of the Faculty Hospital in Nitra who pointed out an altered medical record; fired inspector Ľubica Lapinová who revealed shady public tenders; and Oleg Pastier, a key figure in the civil samizdat movement during the communist regime, received the White Crow Award on November 17. 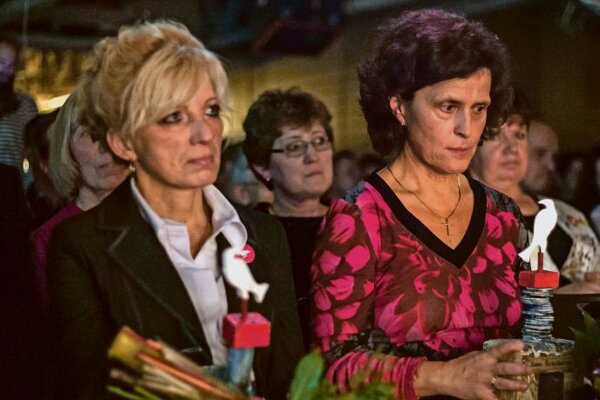 ZUZANA Pechočiaková, a doctor of the Faculty Hospital in Nitra who pointed out an altered medical record; fired inspector Ľubica Lapinová who revealed shady public tenders; and Oleg Pastier, a key figure in the civil samizdat movement during the communist regime, received the White Crow Award on November 17.

Such people are starting to get recognition in Slovakia which was particularly on display at the inauguration ceremony of President Andrej Kiska which took place on June 15, according to Zuzana Wienk from the AFP. She pointed out that among the invited guests were Pechočiaková and previous White Crow winners Vladimír Crmoman and Zuzana Melicherčíková.

“It is a great appreciation and I think that they received some official support from state representatives for the first time,” Wienk told The Slovak Spectator. “Up until then, they were more or less marginalised.”

For the patient’s benefit

In March 2013, Michal, a premature baby, was born with pneumonia, according to the Sme daily. Personnel from Nitra Hospital treated Michal with what might have been excessive doses of the antibiotic Gentamicin. After experiencing acute renal failure, the boy was transferred to the Children’s Faculty Hospital in Bratislava, where the staff noted suspicions of excessive Gentamicin in Michal’s medical record.

Later, during a second hospitalisation in Nitra, a doctor signed off on the notations from the Children’s Faculty Hospital. Sometime after this, the notations about Gentamicin disappeared, and it is alleged that the head of the newborn clinic at Nitra Hospital Alena Ďurišová erased them from the record, which would be a crime.

Paediatrician Zuzana Pechočiaková alerted Jozef Valocký, the Nitra Hospital director, with suspicions that Michal’s records had been altered. She was punished for doing so and Valocký instead defended Ďurišová, according to Slovak Medical Chamber (SLK) head Marian Kollár, the TASR newswire reported.

“I did nothing wrong. I have just pointed out that an unknown person redacted the patient’s medical record, I have not specified anybody,” Pechočiaková told the press in October 2013, as quoted by the SITA newswire. “They took my patients [from me], I cannot visit my department and they moved me to the admission office.”

Pechočiaková was transferred from the in-patient department to the patient admission office. The hospital forced the move by changing the locks on her office door and cutting her salary bonuses without explanation, according to the Medical Trade Unions Association (LOZ).

After media pressure and an inspection by the Health Ministry confirmed the violation of law, Ďurišová was dismissed and Pechočiaková could return to her post. At the press conference she said she would do it again.

“Firstly it was for the patient’s benefit which was key for me then,” Pechočiaková told the press, “secondly, the fact that people should not be okay with [the] situation moved me to do this.”

Pointing out a dubious tender

Ľubica Lapinová, a former inspector of the National Forestry Centre (NLC), has been living for almost two years on social welfare because she revealed violations of the law in a public tender worth almost €600,000 in 2011, according to Sme.

Back in October 2012 the daily reported that the tender was related to the Forestportal.nlcsk.org website providing information to forest owners which, however, ended as dead portal with just several posts to a discussion from 2010.

Then-head of the NLC Milan Lalkovič ended the inspection by reprimanding the inspecting commission and laying off Lapinová. Before she was sacked, he ordered her to do work like scanning masses of documents. At present she is without a job and is taking legal action over the validity of her dismissal, Sme reported.

The present forestry centre head Martin Moravčík sent to the court a statement saying that consecutive inspections have not proven the abuse of public money and the problem was caused by bad project management, according to Sme.

The NLC press release from November 18, 2014 says that the website has been fully operational since 2013.

If Lapinová had accepted the settlement agreement offering her a “meaningful job, she could have been employed for half of the year instead of living on welfare,” Moravčík said, as quoted by Sme.

However, she wants to carry a lawsuit against the centre as the settlement agreement included the offer for a job in a library, not her previous post in which she has 25 years of experience. Moreover, this job should have been cancelled two years ago, according to Lapinová.

“I think that this job would not last long,” Lapinová told The Slovak Spectator.

Continuity of life and work

Oleg Pastier is known as a publisher and author of poetry and radio features and was frequently detained and interrogated by the communist secret police, Štátna Bezpečnosť (ŠtB), for his samizdat activities. He did not attend the ceremony in person because of health problems, TASR reported.

“When you do not name the lie and manipulation aloud, you will have to live with it for your entire life and maybe longer,” Pastier said in the press release. “Every courageous individual’s attempt against any inequity is an attempt for us all.”

According to Šimečka, he is an extraordinary person in Slovak history.

“It is the example of the continuity of his life and work,” Šimečka said, as quoted by SITA. “He became a dissident not because he wanted to fight the regime, but because he loved literature.”