KDH proposes Maroš Žilinka for NKÚ head, PM Fico is not against

CHRISTIAN-Democratic Movement (KDH) will most probably nominate prosecutor Maroš Žilinka for the post of Supreme Audit Office (NKÚ) head. Current NKÚ head Ján Jasovský, nominated by the already split HZDS party, has been serving for more than 10 years, as all attempts to replace him have failed. 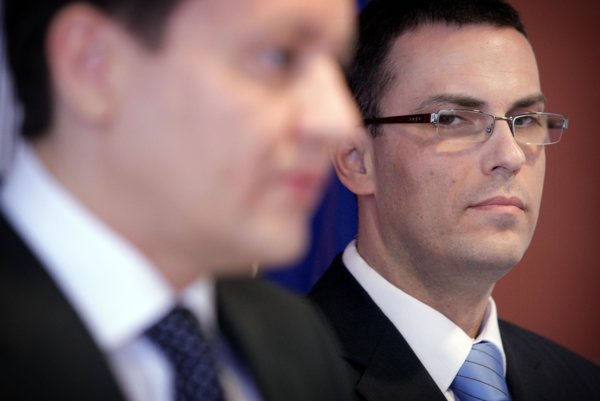 His term expired in 2012, and since then parliament has tried to elect a new NKÚ chair several times, but all previous attempts ended with the opposition candidate losing or being withdrawn.

Žilinka is a strong candidate and meets all the criteria, KDH chairman Ján Figeľ said on April 30 but he added that other names are being discussed as well. Former state secretary at the Interior Ministry (2010-2012), Žilinka has the support of Most-Híd and Ordinary People and Independent Personalities (OĽaNO) parties, and KDH is to discuss the issue with Freedom and Solidarity (SAS) and other independent opposition MPs.

Figeľ has promised to do everything he can to make sure that the NKÚ chair vote goes smoothly. The instalment of the new NKÚ head is in the hands of the governing Smer party, but he cannot say what Smer will think of Žilinka. “If Smer stymies the vote, as before, it will be just a theatrical covering up of the current situation in Slovakia, in which we’re losing millions,” said Figel.

KDH nominated Žilinka already in a previous vote. The opposition withdrew him before the vote, however. The opposition had demanded a public election, but the ruling Smer decided on a secret ballot. Smer did not approve of Žilinka’s age, claiming him too young, and also protested against his too-close connection to politics because of his position in the previous government.

The vote on the NKÚ head will be held on May 19. Names of candidates can be submitted no later than 16:00 on May 6. The deadline was announced by Speaker of Parliament Peter Pellegrini who did not say whether Smer will demand that the entire opposition agrees on one candidate.

The post should belong to the opposition, with the original agreement stating that SaS should propose a nominee. SaS admitted the possibility that it will nominate its own candidate, but it did not want to discuss this. By law, any MP can nominate a candidate, but this does not demand opposition-wide agreement on a single name.

Prime Minister Robert Fico said in the Saturday Dialogues / Sobotné dialógy political talk show on May 2 on the public Slovak Radio, when asked if Žilinka was acceptable for him as a joint KDH, Most-Híd and OĽaNO, that they [i.e. the ruling Smer party] would respect the fact that this post belongs to the opposition. They would also accept any candidate nominated, if there is at least some agreement among the opposition members. He repeated that SaS may nominate its candidate, too, but if there is at least some agreement – not necessarily the whole opposition – the process of election of the NKÚ head would be concluded.

In May 2013, opposition parties united in the then People’s Platform (i.e. the Slovak Democratic and Christian Union-SDKÚ, Christian Democratic Movement-KDH and Most-Híd) officially introduced former state secretary of the Interior Ministry Maroš Žilinka as their candidate for the head of the NKÚ.

But since the ruling Smer party decided there would be a secret ballot, the opposition parties withdrew their candidate, the SITA newswire wrote then.

During the discussion which preceded the election, Smer criticised Žilinka’s independence, saying that in the last parliamentary elections he ran on the slate of KDH, and that in the previous government he served as state secretary of the Interior Ministry. Pavol Hrušovský of KDH responded Žilinka had never been a KDH member, and that he ran in the elections as an independent. He also said that Smer was breaking its pre-election promises since some posts which should have belonged to the opposition are still unfilled.