SLOVAKIA continued its opposition to mandatory quotas proposed by the European Commission, which would bring some 785 refugees to the country. 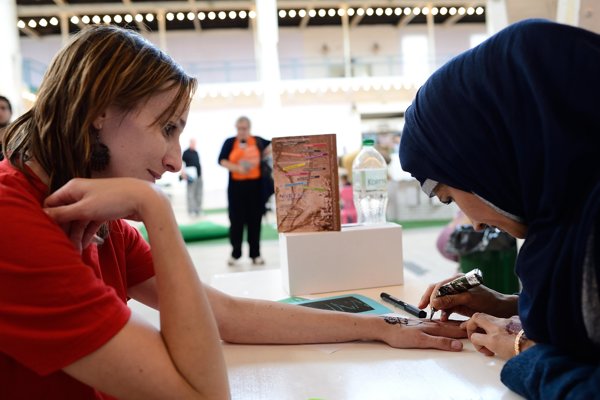 Painting with henna was one of the activities during the June 21 Sunday Groove. (Source: SITA)
Font size:A-|A+  Comments disabled

During the recent parliamentary debate most of politicians expressed their disagreement, claiming that the quotas will not solve the problem. If the EC pushes through its proposal, Slovakia may even organise a referendum on this topic, said Prime Minister Robert Fico.

Several refugees living in Slovakia as well as non-governmental organisations attended an event held on the occasion of the World Refugee Day (June 20), offering visitors an insight into their lives and traditions. Some refugees addressed by The Slovak Spectator admitted they have problems to persuading people they are not a threat.

“I want to show Slovaks that we are not bad people,” Kamali from Afghanistan told The Slovak Spectator during the Sunday Groove held in the Old Market Hall on June 21, which focused on refugees and poverty.

The recently issued report by the Interior Ministry stated that Slovakia granted asylum to 650 people between January 1993 and April 2015. Most of these people came from Afghanistan and Iraq.

In addition, the Migration Office, in cooperation with Slovak Catholic Charity, is currently assisting with the integration of approximately 120 people granted international protection. They provide help with accommodation, learning the Slovak language, finding work and legal, psychological and social counselling.

Slovakia may try to block the proposal on mandatory quotas for refugees during the European Council session on June 25 and 26, in cooperation with other Visegrad Group (V4) countries – the Czech Republic, Poland, and Hungary – via a joint declaration, Fico said. If this happens and the EC nonetheless pushes the quotas through, the Slovak government will consider other steps, including holding a referendum, the prime minister added.

“It may be a way of avoiding the consequences of an EC decision with which the Slovak government simply can’t agree,” Fico told the MPs during the June 23 debate, as quoted by the TASR newswire. 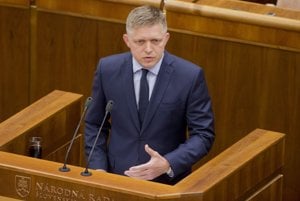 “If the [first] Robert Fico government had not persuaded the parliament on adopting the Lisbon Treaty, it would be enough for the parliament to say No and it would be binding,” Lipšic claimed. The veto would not stop the validity of the European law in Slovakia, he added.

MPs meanwhile adopted an extensive resolution through which they rejected the quota system. They expressed in the text their “deep concern and regret over the tragic situation of migrants in the Mediterranean Sea area who come to the European Union”. They also condemned the abuse of the migration topic to stir up tensions, racism and xenophobia, as well as to emphasise the need of solidarity with EU member states when solving the current situation, as reported by TASR.

The MPs also declared the “readiness of Slovakia to help solving this humanitarian crisis”, insisting on the voluntary principle, TASR wrote.

The resolution was supported by 125 MPs, who also pledged Fico to present their stance at the summit held in Brussels on June 25 and 26. 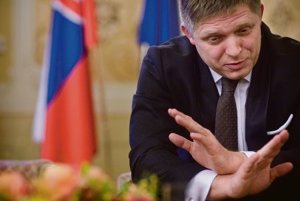 During the parliamentary debate Fico insisted that quotas are not the solution to migratory pressures, saying they will rather cause “the whole problem to return to us like a boomerang with even more intensity”. Thus he favoured the solution that member countries will be deciding for themselves on a voluntary basis whether and how to participate in the process of refugee resettlement and relocation, as reported by TASR.

Interior Minister Robert Kaliňák also stressed that the system should be voluntary, adding that Slovakia has to keep part of its asylum capacities vacant due to the conflict in Ukraine, as reported by TASR.

Several opposition politicians also expressed their disagreement with quotas, with Ján Figeľ, chair of the Christian Democratic Movement (KDH), saying that Slovakia should provide cooperation and assistance within its asylum procedures capabilities, gradually accepting several hundred refugees who qualify for asylum. The Most-Híd party also does not consider quotas to be a solution. The party supports bilateral negotiations with countries from which most refugees come, TASR reported.

Some NGOs however say that the politicians are distorting what the EC actually wants us to do. More than a dozen of NGOs wrote an open letter in mid-June, calling on the government to change its approach to the EU quotas and accept the refugees that really need the help.

“The main message is the call on the government and the prime minister to try to calm down the situation and the extremist approaches of the public,” Zuzana Števulová from the Human Rights League, the initiator of the letter, told The Slovak Spectator. 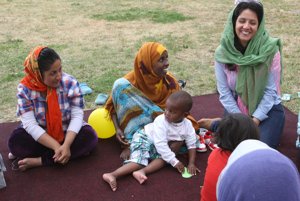 Moreover, there are several activities that try to present the life and tradition of foreigners living in Slovakia, including refugees, to the Slovak public. This includes the June 21 Sunday Groove held in the Old Market Hall.

“There are still only a few refugees in Slovakia and several organisations are trying to make their stay in Slovakia easier, not only by social integration but also the cultural one,” Laco Oravec, programme director of the Milan Šimečka Foundation, said.

The visitors could learn about the refugees via food, various workshops and discussions. They could also listen to readings from the diaries that refugees coming to Slovakia were encouraged to write. In addition, various NGOs were presenting their activities and ways to help refugees. People could stand by their stalls and learn more about this topic, organisations approached by The Slovak Spectator confirm.

Slovaks are both good and bad

One of the important features was that people could directly meet with refugees who live in Slovakia. For example, Ruhina Sidiky from Afghanistan has been living in Slovakia for five years. She has been granted asylum and is currently living with her husband and three children in Bratislava.

Their life is, however, not very easy as her husband has cancer and cannot work, and she herself has difficulties to find job. She is doing only temporary work and attends various workshops and events where she paints with henna and bakes baklava.

Another refugee present at the groove was Ruzbe from Iran, who has been in Slovakia for six months. He is still living in the camp in Rohovce (Trnava Region), waiting for the decision on his asylum application. It has already been rejected by the Migration Office but is now being scrutinised by the courts.

Kamali also saw his first asylum application refused, but he was finally granted the subsidiary protection after a ruling by the Supreme Court. He has been living in Slovakia for 1.5 years and works as an assistant cook at Ikea.

When speaking about the attitude of Slovaks towards them, Ruzbe says that people he meets during trips to Bratislava are good. However, he added that he has some problems when trying to get something as many of them do not speak English, only Slovak, and he is still learning the language. Sometimes he is also mistaken for being Roma because of his appearance, Ruzbe added.

Ruhina says that there are various people, both good and bad. She recalled some Slovaks who called her a terrorist. Her daughter has sometimes also had problems at school, though she is not wearing hijab like her mother does. Kamali recalled a situation when he was not allowed to go to a disco because he was a foreigner.

However, he thinks that if they show people that they are good and do not want to harm anybody, people will see it and may probably change their opinion.

The groove event took place only one day after the protest against immigration organised by several extremist groups that was attended by some 6,000 people.

“This day was a kind of bubble in which the community of friends and people who support refugees met,” Oravec told The Slovak Spectator. “It is good to show that there are not only 5,000 marching supporters of extremist movements, but also many with a different attitude who maybe do not have space to express and demonstrate it.”

Illah van Oijen, a Dutch photographer and activist, also appreciated the atmosphere. She said that people who are coming there are positively surprised and can learn more about other cultures and minorities.

“The event attracted me with its idea, as it is support of this refugee policy,” Iveta Kurčíková from Bratislava told The Slovak Spectator, adding she wanted to show her support to these people.

Similar reasons also lured Zuzana Jacková, a student from Prešov. She appreciated the fact that she could meet with people who are not xenophobic and also talk to refugees and learn more about them. She is afraid, however, that such events take place largely in Bratislava, and not so often elsewhere.