Skalica typical pastry “trdelník” is a hit in South Korea

TWO young men, a Slovak and a Czech, who got scholarships for study in South Korea, launched a non-typical business there – the special cake characteristic of the western-Slovak region of Skalica, called trdelník. 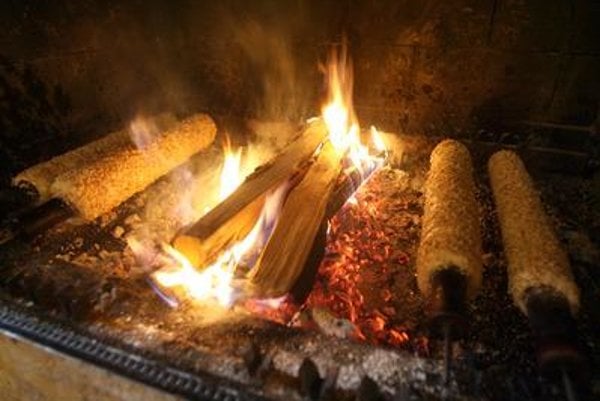 Slovak Michal Dutko, aged 30, and his friend one year younger Czech Jiří Podhirna, met in South Korea. After cooking typical Czech and Slovak delicacies (goulash, bryndzové halušky - gnocchi with sheep cheese) tentatively at university parties and festivals and trying out selling candles made of bee’s wax and handmade glass from their homelands, they gathered some capital and opted for trdelník.

Skalica’s traditional trdelník pastry is made from sweet leavened dough, which is spooled around an iron tube and grilled over charcoal. It is coated in a mixture typically involving sugar and ground walnuts, which lends the pastry its sweet flavour. The pastry has been given an EU-protected designation.

“At evenings, we started putting together the mosaic about the direction our business should lead,” Dutko recalled for the Pravda daily. “We first had a machine to produce trdelník sent by post from home – directly from the region of Záhorie, more specifically from Kopčany close to Skalica, where I agreed on the delivery with an experienced trdelník-machine builder. We had the recipe directly from Skalica, and so the only thing left was to learn how to bake it, and to test the real interest in the cake.”

Trdelník was able to fill a gap on the market, as typical Korean food is a dish of rice, often cooked with other grains or legumes, and a bowl of soup, Dutko explained. These are added with bowls of meat, fish, vegetables, legumes and eggs – almost everything one can eat; except for sweets. A feature common for Korean food is its hot and spicy flavour.

What was difficult was the commercial part of the enterprise, as the Korean market is “protected” by the government and it is very hard for foreigners to assert their presence, even more so without a huge initial investment. There are numerous rules, and they are being changed all the time, especially to protect domestic products and businesspeople. While locals need about USD500 and a few workdays to procure all necessary licenses, foreigners need USD100,000 on a special account to even start making a  business plan.

“It is also very hard to build trust on the local market, as Koreans primarily believe domestic products and countrymen,” Dutko says.

The two foreign entrepreneurs found a Korean who became their patron, gave guarantees and offered them a business license.

“This January, we founded the Czechoslovakia made Ltd. in Hong-Kong, and made a joint venture with the Korean acquaintance. After we received a business license, we started looking for a good site,” the Slovak comments.

In Korea, it is usual to pay advance payments, and a sort of compensation – in their case it was USD30,000 and 10,000, respectively – with the latter being non-returnable. The compensation is paid for the clients the new owner “inherits”, regardless of whether the previous business was a butcher, or a toy shop, Dutko explains.

Beginning in May, their business was festively opened, in attendance also of Slovak and Czech ambassadors to Korea, Milan Lajčiak and Tomáš Husák.

“The Slovak and Czech community fully supports and promotes us in their social circles,” Podhirna said.

Surprisingly enough, many Koreans know the cake already, under the name trdlo, from Prague – which is a popular honeymoon destination for Koreans. There, trdelník is sold in some souvenir kiosks.

“Thus, we decided to call our restaurant Trdlo – it shocks Korean with difficult pronunciation – four consonants one after another; and if they try to find in Naver (the Korean Google), nice and luring pictures pop up that make their mouths drool,” the Slovak entrepreneur explains.

Their business is doing well, and they plan to open another branch or several branches in other corners of the country.

“The expenses are three to four times higher, but prices are as well, and the profits are thus considerable,” Dutko noted for Pravda.

As one of the crucial issues of doing business in South Korea, he mentions the different mentality, different manners and strict rules of behaviour, with personal image and the first impression being crucial.