THE CURRENT crisis in milk production not only causes financial losses for farmers but may also result in some of them closing their businesses, according to the Slovak Agricultural and Food Chamber (SPPK). 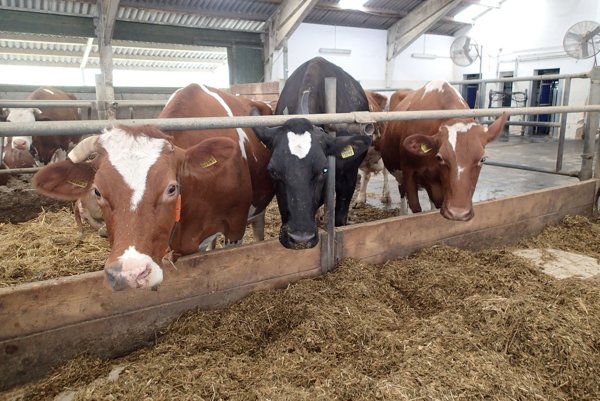 Some farms in Slovakia are in danger. (Source: TASR)
Font size:A-|A+  Comments disabled

The big drop in the purchase price of milk has caused problems for farmers across the European Union. The drop in prices comes amid the current Russian food embargo and abolition of milk quotas, meaning the market is flooded with milk and dairy products. Farmers are ready to protest against current conditions at the September 7 EU summit in Brussels and are calling for solutions.

“If the situation does not change, the farms may be closed down,” Milan Semančík, head of the SPPK, told the Pravda daily.

Last year 26 of 550 dairy farms were closed and it is expected that this year the number may rise to 50 farms, Pravda reported.

The dairy sector currently employs some 10,000 people. If the number of dairy cows decreases further, it will not only reduce employment but also restrict further investments in the sector.

“When the breeding of milk cows stops, the stock will never be restored,” Jarmila Dubravská of SPPK told The Slovak Spectator.

According to Dubravská the current situation in Slovakia is worse than in other EU countries as prices for milk here are below the EU average.

About a year ago the average price of milk in the European market was 40-42 cents per litre but now it comes to only about 30 cents in developed countries. The last registered price per litre in Slovakia was 27 cents, which is about 10 cents less than last year at this time, said Agriculture Minister Ľubomír Jahnátek, as reported by the SITA newswire.

As a result, revenues in the milk production sector in the first half of this year dropped by €22 million year-on-year, even though farmers produced 15 million litres more milk.

Moreover, farmers’ revenues do not cover their production costs, which are 35-40 cents per litre.

Milk producers also criticise retailers. Some of them are selling milk for 39 cents per litre, after discounts.

“Farmers sell the milk below their production costs, retailers pushed the dairymen into lower sales prices, but no impact on consumer prices is seen in the shops,” Stanislav Voskár, head of the Slovak Dairy Association, told Pravda.

Jahnátek said that the decision to abolish quotas was poorly timed amid the parallel Russian sanctions on EU food.

“Unfortunately, countries neighbouring Slovakia, especially Poland, Germany, and Denmark, which were the biggest producers, are now eyeing the Slovak market,” Jahnátek said, as quoted by SITA, adding that the influence on prices and surplus of milk impacts production.

The minister said another problem is the retail chains, but on this issue the ministry has already addressed the European Commission.

“If it does not deal with the unlimited influence of retail chains on prices, every support of primary agricultural production is useless as everything extra the EC or countries, including Slovakia, give to farmers ends up as increased profit for retail chains,” Jahnátek stated, as quoted by SITA.

The agriculture ministers will discuss the milk crisis at the September 7 summit.

“The Commission is aware of the difficult situation faced by producers from different sectors in several member states,” Ingrid Ludviková of the EC Representation in Slovakia told The Slovak Spectator.

She added that the EC has already adopted some measures to alleviate the situation, like aid for private storage and an intervention price.

But this kind of help is “considerably unusable under our conditions”, Slovak Agriculture Ministry spokesman Peter Hajnala told The Slovak Spectator. No Slovak dairy farmer has asked for this kind of aid yet, he said.

Slovakia wants to propose at the summit to temporarily restore the milk quotas or some kind of regulation system, at least until the Russian crisis is resolved, Jahnátek said, as reported by SITA.

On the same day as the summit, Slovak farmers will join their colleagues from other countries and protest in Brussels.

“Though the 500 farmers who produce milk in Slovakia will not impact the situation in the EU, we can join others at the European level,” said Alexander Pastorek, head of SZPM, as quoted by the TASR newswire.

“Though the ministry supported milk cows breeding this year, the subsidies are not enough to reduce the loss,” Margita Štefániková, executive director of SZPM, told Pravda.

To resolve the current crisis, SZPM proposes to increase consumption of milk in Slovakia, which is very low: only 158.5 kilogrammes of milk per person per year while the EU average is 270 kilogrammes.

Dubravská of SPPK also says that the state aid is not enough, adding that the current situation could be resolved by setting a minimum price for milk or introducing a system of regulations to save the sector in EU member states.

“Creating the ‘safety net’ may help avoid high losses and fluctuations,” Dubravská said, adding that such a system would save money not only for member states but also for the whole EU. “If the problem is solved right in the beginning, it requires less effort and less money.”

Among other potential measures are the introduction of pro-export subsidies, supporting the sales of milk and dairy products, and also introducing the transparency to the relations among primary producers, processors and retailers.

“We are convinced that the question of margins and preventing the abuse of dominant position of retail chains is possible only at the EU level,” Dubravská said.