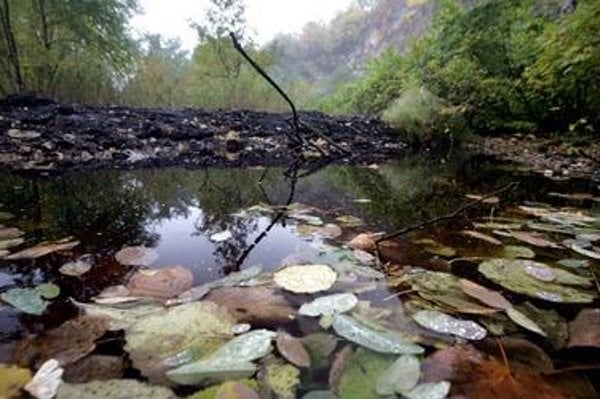 There are about 120 old industrial waste dumps in Slovakia. (Source: Sme)
Font size:A-|A+16

The chemical waste dump is a legacy of the communist regime when environmental issues were not a state priority. But communist governments have also repeatedly failed to deal with the problem.

Citizens and the local municipal office of Vrakuňa have been calling for solution for years as Vrakuňa does not have enough money to clean up the mess itself. Citing the danger posed by the old dump, the mayor and deputies of the borough of Vrakuňa entered a time unlimited strike alert this May.

“If the situation does not change, we are prepared to enter a strike as well as organise protest actions,” said Vrakuňa Mayor Martin Kuruc as cited by the Bratislavské Noviny local paper in mid May.

While Vrakuňa and neighbouring Podunajské Biskupice, which is also affected by the leaking pollution, perceive the dump as endangering sources of drinking water, the Environment Ministry perceives it as a local problem, which it nevertheless, should be solved in cooperation with the state.

Environment Minister Peter Žiga informed on August 20 about results of a geological investigation of the locality, claiming that for now local sources of drinking water are not endangered. The nearby Žitný Ostrov (Rye Island) is the biggest drinking-water reservoir in central Europe.

“Catastrophic scenarios speaking about pollution contaminating the underground water of Žitný Ostrov, or the Danube River, have not been confirmed,” Žiga said, as cited by the TASR newswire. Though a recent geological investigation has showed that the problem is local, it confirmed a long-term suspicion of high concentrations of dangerous agents like pesticides, herbicides, benzenes or arsenic and gradual spreading further, he added.

On the other hand, Alena Trančíková, from the water utility Bratislavská Vodárenská Spoločnosť, does not share the opinion that the dump and the pollution is only of a local problem. She cited for the Denník N daily findings of the nearby refinery Slovnaft and monitoring of the area that the pollution has been spreading from the dump deeper into Žitný Ostrov. In terms of urgency she considers the problem as extremely urgent.

“It was already late yesterday,” Trančíková told Denník N, adding that there have been construction permissions issued in the area and  some buildings have been already built above the dump. Final results of the geological investigation will be published in September, Denník N wrote.

History of the dump

The chemical waste dump was used by the chemical company Chemické Závody Juraja Dimitrova (CHZJD). It was permitted to be built in part of the riverbed of a branch of the Malý Dunaj river in 1966 and was closed down in 1979. It is about 46,000 square metres large and some 120,000 cubic metres were dumped there. In 1989 it was covered with an inert material. After the hydropower station on the Danube River in Gabčíkovo was put into operation in 1992, the level of underground water started to increase. It gradually reached the level of the contaminated soil as well as chemical waste and the pollution contaminated the local ground water. As a consequence locals have not been able to use water from their wells since 2002.

In the past it was a problem to solve such old environmental burdens especially because it was a problem to identify the responsible entity. Now, based on the valid legislation, a proceeding sets the so-called obligatory person responsible for the dump. In case of this chemical dump the proceeding started in mid August and in all probability it will be state that will secure the solving of the toxic dump.

“Since this dump was legal, in all probability this proceeding will end after 60 days in setting the state as the obligatory person,” said Žiga as cited by TASR. “This means that it will have to remove or secure this dump.”

According to the ministry, there are two possible solutions. The first one is the so-called encapsulation when walls to be built around the dumped waste, also underground, would disable further leakage of the toxic waste. This would last 18 months and cost about €20 million.

It is assumed that next generations would be able better handle the problem of the dump.

The second possibility is to remove the waste while this solution would cost about €113 million and last up to five years. For now the Environment Ministry prefers the first solution as it is cheaper and faster while it plans to finance it from the EU Operational Programme Quality of Environment, in which Slovakia has about €200 million.

In Slovakia there are registered more than 2,000 environmental burdens. Of them nearly 120 are industrial waste dumps.