Slovenský raj national park will have a traffic light for tourists

SLOVENSKÝ raj [meaning Slovak Paradise] national park in the east of Slovakia has several gorges that are too crowded in summer. The National Park Slovenský raj administration came up with a unique idea: the entrance to Suchá Belá gorge will get a traffic light installed. 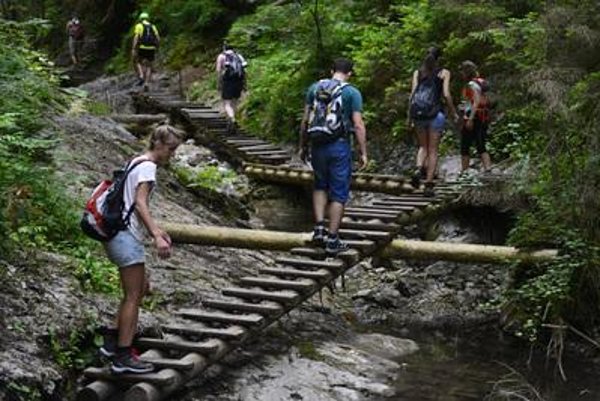 This national park is generally very popular, and as there are some hiking routes that are more picturesque and interesting for tourists (like Suchá Belá or Prielom Hornádu), “traffic jams” occur in the narrowest points of them. In the former one, there were queues up to one hour to enter iron ladders at Misové vodopády waterfalls, the Korzár regional daily wrote.

„Tourists show enormous interest in the Suchá Belá gorge, in the long term,” head of the national park administration, Tomáš Dražil, explains. “Howeve,r the number of people in front of Misové vodopády harms the comfort of visitors, and often minor conflicts occur. People have to wait longer, they jump queues and the atmosphere grows unnecessarily tense. This spring, we have started to prepare an interesting project: we want to build a traffic light at the entrance to Suchá Belá. He added that this would not be a classical traffic light signalisation that would ban entry to the gorge at a certain moment.

“Rather, this would be a recommendation that there are too many tourists on this route, and they would have to wait long at the ladders,” Dražil informed. The orange light would mean a potential forced break; while the green light would mean a smooth passing of the gorge.

“We would also like to install a system of cameras near Misové vodopády that would broadcast on-line to screens at Podlesok and on the national park’s website. Thus, tourists would be able to make a picture of the situation, and decide themselves whether they start a hike, or whether they can wait a bit.”

Another idea of the project is a device counting all visitors to the Suchá Belá gorge. „A counting device can record all people entering the gorge but also those who return,” head of the national park said. “This is important information for us, as in recent years, we know of many people who make it to the Misové vodopády, but then realise they would not make it on the ladders, or fear for safety of their children, and decide to return.” The counting device would be operating all year round. It has a huge importance, as a long-term observation and analyses of the tourists’ routines could, in the future, control the traffic lights and thus avoid excessive concentration of tourists which is harmful for biotopes at the bottom of the gorge.

The total costs of the project amount to €100,000 and it should be completed next year. An educational path at Podlesok is also planned, which would inform on local marshlands.