Holiday celebrates Virgin Mary, or just a day off work

September 15 is one of Slovakia's official state holidays and celebrates Our Lady of Seven Sorrows, the country's patroness. 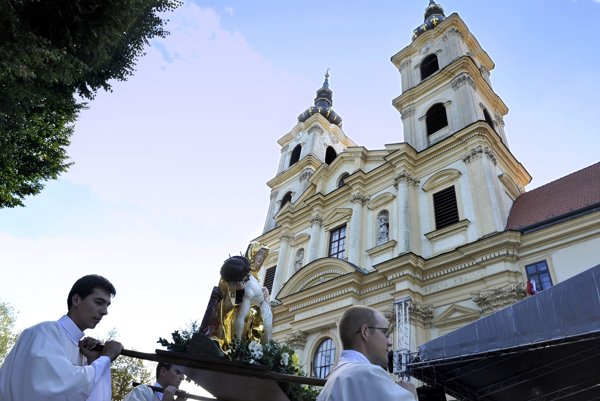 It's a holy day for Catholics, but for many others it is just a day off. September 15 is one of Slovakia's official state holidays and celebrates Our Lady of Seven Sorrows, the country's patroness.

“It is a dramatic destiny of the relationship between the mother and her son, which is close to everybody,” Auxiliary Bishop Jozef Haľko of the Archdiocese of Bratislava told The Slovak Spectator.

For less observant Slovaks, the date is merely a day off from work, said Miroslav Tížik, sociologist with the Slovak Academy of Sciences (SAV).

This is also confirmed by two surveys, which suggested that people consider this day a less important holiday, he added.

Slovakia has its sorrows

“Every Christian nation in Europe and the world has its patron: Irishmen have St Patrick, Hungarians St Stephen, Czechs St Wenceslaus,” Stanislav Gábor, spokesman for the Greek-Catholic Eparchy in Bratislava, told The Slovak Spectator, adding that many nations picked the Virgin Mary.

The Seven Sorrows are events in the life of the Virgin Mary that are a popular devotion and are frequently depicted in art: the prophecy of Simeon; the flight into Egypt; the loss of the child Jesus in the temple; Mary meets Jesus on the way to Calvary; Jesus dies on the cross; the piercing of the side of Jesus, and Mary’s receiving the body of Jesus in her arms; and the body of Jesus being placed in the tomb.

The first note about celebrating Our Lady of Seven Sorrows comes from 1412 when she was mentioned during the synod in Cologne. Since then, the holy day spread to all of Europe, but it had various names and was celebrated on various days. Thus, Pope Benedict XIII set the name of the holy day and also date, which fell to Friday before Palm Sunday, in 1727. He also allowed the Catholic Church to worship her as patroness in Slovakia.

There was, however, another group of believers who started to celebrate Our Lady of Seven Sorrows in mid-September. Finally, Pope Pius X set the holy day on September 15 in 1913.

In 1966 Pope Paul VI declared Our Lady of Seven Sorrows as the patroness of Slovakia.

“Also the history of Slovakia is full of sorrows,” Haľko said.

The celebration of Our Lady of Seven Sorrows is similar to the Greek Catholic celebration of the Blessed Virgin Mary when the believers “worship the pains and tortures from which the Virgin Mary suffered under the cross where her son, Jesus Christ, died”, Gábor said.

Lutherans, however, have different approach to the holiday. Though they respect Mary as Jesus Christ’s mother, they do not worship her as a saint. They do not pray to her and do not build churches consecrated to her, Edita Škodová from the General Bishop’s Office of the Evangelical Church of the Augsburg Confession in Slovakia (ECAV) told the Slovak Spectator.

They claim that historically, the cult of worshipping Mary did not appear in official teachings, but that it gradually appeared among people. The official church then included this into its teaching and dogmas, but Lutherans refuse to accept it, reads the ECAV website.

The holiday in Slovakia is closely connected with the pilgrimage site in Šaštín-Stráže (Trnava Region) and Countess Angela Bakičová and her husband Imrich Czobor. She built a wooden statue of the Our Lady of the Seven Sorrows in 1564 as thanks for hearing her prayers, and placed it in the chapel.

The Pauline Order initiated the construction of pilgrimage church and monastery at the site in the first half of 18th century, which was consecrated in 1764. Pope Paul VI declared the church a Basilica Minor in 1964.

Though it does not belong to the oldest pilgrimage sites in Slovakia, Šaštín-Stráže is visited by thousands of people every year. Last year was a record one since the Catholic Church declared it a Jubilee Year of Our Lady of Seven Sorrows, commemorating 450th anniversary of the first miracle in Šaštín-Stráže , the TASR newswire wrote.

Altogether 250,000 people visited the site, the Conference of Bishops of Slovakia informed on its website.

One of the traditions connected to the site is the national pilgrimage route held on September 15. Many Greek-Catholics attend the pilgrimage to Šaštín as well. The worshippers are situated mostly in eastern Slovakia, where they have several pilgrimage sites consecrated to the Virgin Mary. The biggest pilgrimages take place on the Dormition of Our Most Holy Lady held on August 15, Gábor said.

There was, however, no pilgrimage site in western and central Slovakia. Thus, the Greek Catholics made a deal with the Archdiocese of Bratislava in 2008, and started visiting Šaštín as well, he added.

People have several reasons for attending the pilgrimage, according to Haľko.

“A pilgrim’s journey is a symbolic gesture expressing that our life is a pilgrimage,” he said, adding that on its end people will find a new dimension, the connection with God.

Moreover, people go together, which creates some kind of fellowship that allows them to learn about one another and help one another, he added.

The September pilgrimage to Šaštín however has a national character, said Tížik. Elsewhere in Europe it is more typical to hold pilgrimages in summer. In Slovakia, the summer pilgrimage takes place in Levoča.

There have also been some attempts to scrap the holiday. Most recently, the current ruling government proposed to celebrate Our Lady of Seven Sorrows on Sunday, and not during the working week. The cabinet explained that with such move Slovak economy would obtain one extra working day.

“This would in fact mean that this holiday would be abolished without interfering into the Vatican agreement,” Fico said back in June 2012, as quoted by the Sme daily. He also planned to abolish the Constitution Day holiday, which falls on September 1.

The churches and believers however disliked the idea. The activists even launched the petition signed by 128,765 people, the SITA newswire wrote.

The government eventually dropped the plan.

The fact however remains that September 15 has a specific status among other holidays. It made it to the list only because of the agreement with Vatican, Tížik explained, calling the Slovak case “a precedent in Europe”.

“There is nothing similar elsewhere since it is absurd, especially if the country claims to be religiously neutral,” Tížik added.

He also noted that ordinary people will not call for scrapping the holiday as, either they are Catholics or not, it is a day off.