A LIGHT aircraft that had a hard landing in a field near the village of Nižný Hrušov, in Prešov Region in eastern Slovakia on September 17, could have been used for illegal activities. 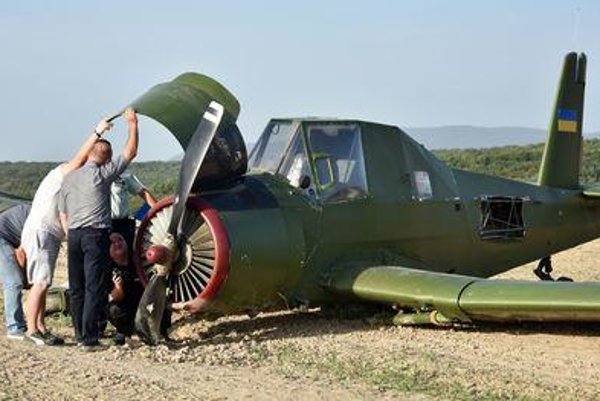 “The Interior Ministry’s forces were monitoring the aircraft that underwent an emergency landing in the field near Nižný Hrušov,” Ivan Netík from the Interior Ministry told the TASR newswire. “The flight was picked up by a technological device of the Interior Ministry on the [Slovak-Ukrainian] border. Given the fact that by our measures we prevented it from landing on provisional runways where it had landed in the past, [the pilot] attempted to land elsewhere and it was there where the aircraft met its fate. The aircraft was monitored due to activities related to the smuggling of cigarettes.”

Slovak Armed Forces were aware of the aircraft, but they were not asked for cooperation, as the relevant bodies determined that the plane did not pose a threat to the security of the state and the public, Slovak Armed Forces spokesman Štefan Zemanovič told TASR, explaining why the Aircraft was not accompanied by the Slovak army’s planes and forced to land at the nearest airport, as is usually done.

The aircraft, which most probably landed early on the morning of September 17, was piloted by an as yet unknown person. No people were found inside or the vicinity of the area where it landed. The plane was discovered by an employee of the local agricultural co-op. “The aircraft type is similar to the so-called Čmeliak [Bumblebee], which was used for crop dusting in the past,” mayor Ján Fenčák who called in police and firefighters to inspect the site, said for TASR. “Some of the locals claimed that they heard a strong impact at around 5:00 [on Thursday].”

The aircraft, which was damaged during the emergency landing, was painted dark green and featured the Ukrainian flag and openings cut out of the rear part of the fuselage. “The parts with the holes should bear aircraft identification signs, Fenčák explained. “They were most probably removed, however, in order to prevent the aircraft from being identified.”

Meanwhile, police in the town of Michalovce, in Košice Region, are looking into the circumstances of the death of a Ukrainian national and have launched a criminal investigation relating to manslaughter, Košice region police spokesman Alexander Szabo informed TASR on September 18.

At around 5:00 on the previous day, a 36-year-old Ukrainian man drove his brother, 34, slumped on the front passenger seat of the car with no signs of life to the Michalovce Hospital. “A doctor concluded death from a unknown cause. The cause will be determined by an autopsy,” Szabo said. The police have detained the driver.

Further details of the case are the subject of an ongoing investigation, including the potential connection between these two coinciding incidents.