THE PLEDGE by Prime Minister Robert Fico to sue the EU over refugee quotas has materialised into a plan after the cabinet assigned specific people to design the lawsuit. 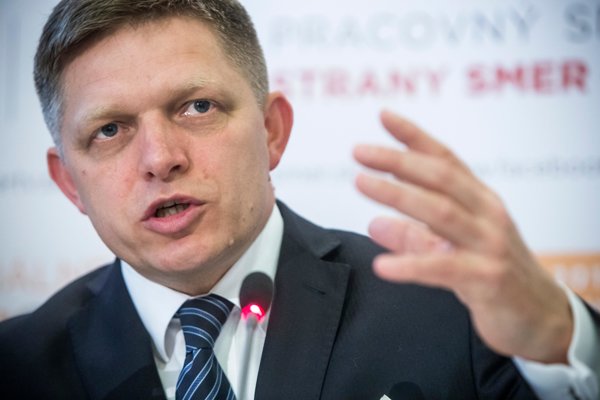 Fico voiced his determination to challenge the introduction of the quota system to resettle refugees around the EU just hours after the Justice and Home Affairs Council, which gathers interior ministers of the EU, passed the plan in a qualified majority vote on September 22. Only Slovakia, the Czech Republic, Hungary, and Romania voted against it.

None of the other three countries, however, will continue pushing against the decision of the majority after the summit.

“I would rather go into infringement procedures than accept this dictate,” Fico said.

Political analysts consider the firm stance of the government, accompanied with the strong statements by Fico, a response to the anti-migrant sentiments present among the Slovak public, ahead of the upcoming parliamentary elections.

“We are perceived as the country most lacking solidarity,” political analyst and president of the non-governmental think tank Institute for Public Affairs (IVO), Grigorij Mesežnikov, noted in an interview with The Slovak Spectator.

Fico’s decision to sue the EU will harm Slovakia, he added.

Based on the quota system, Slovakia is meant to accept 802 refugees in total – 190 from Italy and 612 from Greece, according to Andrej Králik, the spokesman for the European Commission Representation in Slovakia. This number is still sort of an estimate, and it can be further reduced depending on the decision of non-EU countries Norway and Switzerland to join the scheme.

Based on the Lisbon Treaty’s Article 263, Slovakia as an EU member state can challenge a decision of the Council of Ministers, “on grounds of lack of competence, infringement of an essential procedural requirement, infringement of the Treaties or of any rule of law relating to their application, or misuse of powers”. The government is planning to apply this provision in regard to the Council’s approval of a mandatory quota system for redistribution of 120,000 refugees. The case has to be filed within three months since the decision was published, which was September 24.

By voluntarily entering the infringement procedure, Slovakia will not only protest against the quotas but will also influence the further functioning of the EU, Fico said, as reported by the TASR newswire.

The new moment in the EU is that such an important decision was passed with the qualified majority, which means that all countries that disagreed with the proposal, including Slovakia, were outvoted, Foreign Minister Miroslav Lajčák said.

The parliamentary opposition has refrained from pushing the agenda of quotas and refugees much further. Some of Smer’s biggest critics, including the Ordinary People and Independent Personalities (OĽaNO) and NOVA, have supported the idea of suing the EU. Others, like the Christian Democratic Movement (KDH) and Most-Híd, opposed the plan to sue, but still maintained negative stance towards the quotas.

Most-Híd Chairman Béla Bugár argued the lawsuit against the EU should be debated by the national parliament. Fico on the contrary argued that the cabinet does not need a parliamentary mandate to sue.

“The prime minister did not need the parliament’s mandate to refuse the quotas, yet the parliament discussed this issue twice,” Bugár said, adding that the PM should show the courage to defend the lawsuit in front of the MPs and the citizens. Bugár maintains that with such step, Fico threatens the position of Slovakia in the EU.

In the final vote on the quotas, Poland was the only one of the Visegrad Group (V4) countries voted in favour of the motion.

This prompted some observers to suggest that the regional grouping might be facing a major crisis. But the V4 prime ministers got together ahead of the meeting of heads of state or government on September 23 in Brussels and issued a joint statement in which they once again stressed that the EU should turn its attention to “the root causes of migration flows”.

The EU should particularly focus on protection of its external borders, adoption of a common list of safe countries of origin, more effective return policy, hotspots, fight against smugglers, and “more active engagement in solving the situation in Libya, Syria, and the Middle East”.

No other country will continue to oppose the plan, however.

“I don’t want to further escalate the tension by (court) charges,” Czech Prime Minister Bohuslav Sobotka said, as quoted by Reuters. “You can stretch the rope only to certain point, then it frays.”

Mesežnikov noted that the Visegrad cooperation is based on principles that go beyond this sort of ad hoc situation that sometimes are less, sometimes more important.

“What I consider much more important for the Visegrad cooperation is the agenda of the Ukraine-Russia conflict, and the way we acted and broke away from Poland,” Mesežnikov said.

The vehement refusal of quotas and continued rhetoric that refugees, particularly Muslims, would not feel at home in Slovakia, are based on political calculations ahead of the 2016 parliamentary elections, Mesežnikov said. It is an attempt to use the anti-migrant sentiments among the population at the start of the campaign.

“There are several factors that nourish these sentiments, and Fico as a populist sensed that and probably he is worried that in case he demonstrated a more welcoming attitude he would lose the support of these people,” Mesežnikov told The Slovak Spectator.

Mesežnikov labelled Fico’s stance protectionist, and an expression of national egoism. This, after all, is not a new face of Slovakia’s prime minister, who has proved his nationalist political orientation in the past, in relation to national minorities, and to Hungary, he noted.

With only months left until the national elections it is hard to predict whether Smer will try to intentionally nourish the issue of migration and use it also in the later stages of its campaign.

“Fico has found himself under a rather strong fire of criticism from inside, from a minority but nevertheless opinion-making part of the society, as well as from outside, from European politicians, as there already has been a proposal to suspend Smer’s membership in the Party of European Socialists (PES),” Mesežnikov said. “He might not be interested in pushing this further to the edge, but surely he will want to use this case for presenting his attitude as one that is appropriate for Slovakia, protecting from some outer influences.”

At the September 23 summit of EU prime ministers and heads of states, the summit participants paid little attention to the lawsuit that Fico announced Slovakia would file on the same day. But there has been a reaction from among the European socialists, suggesting that the persistent resistance to quotas and strong words addressed towards refugees might cost Smer its PES membership. Smer’s membership in PES was suspended once before when it teamed up with the nationalist Slovak National Party in a ruling coalition in 2006. Smer was reinstated in 2009.

“The position made clear by Mr Robert Fico that the ‘mass migration of Muslim immigrants who would start to build mosques will not to be tolerated’ or regarding the ‘restriction of the freedom of Muslims in Europe’ or again that ‘Slovakia is built for Slovaks, not for minorities’, has embarrassed the whole Progressive family,” said Gianni Pittella, president of the Socialists an Democrats grouping in the European Parliament.

Pittella also criticised Fico for “persistent unwillingness to take responsibility and show solidarity” and suggested that the PES begin the procedure for the suspension of Smer.

Smer however, maintains that they have backed their rejection of quotas with rational arguments and “never cast doubt over our preparedness to contribute to aid in an active manner”, spokeswoman Ľubica Končalová told the TASR newswire.