ČIERNY Balog is no big metropolis, rather a village in central Slovakia, but it has a rarity probably unique in the whole world: a train crosses the football pitch, even during weekend matches. 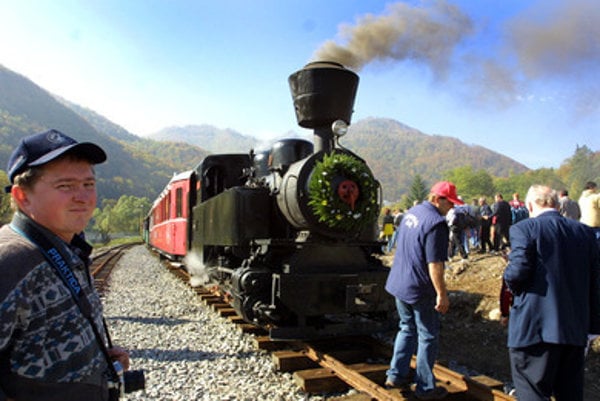 A total of 17 tram carriages for an atypical narrow-gauge track that will pass through Čiernohorská valley will arrive in spring 2021. (Source: Sme)
Font size:A-|A+  Comments disabled

The local Čierny Hron railway track (Čiernohronská železnička) is a historical narrow gauge railway, originally used to transport wood from the forests but now mostly transporting tourists. A video recently placed on the Internet shows it puffing calmly, packed with tourists, under the stands of the pitch during a match.

Locals are used to this attraction and several brag about it, luring many curious people to Balog. “This is nothing new, the train has been riding on the pitch for years, but for tourists, it is [a rare] experience,” Vladimír from Čierny Balog told the Pravda daily, adding that thanks to this rarity, inhabitants of this tiny municipality can boast of a world unique phenomenon. He said that his wife jokes that if he gets drunk, the train can bring Vladimír from the match directly to his house.

Another football fan, Ivan from Zvolen, brought his son to watch local football, but the boy was especially enthusiastic about the combination of sport and the historical railway, which he likes very much.

“I think this is a curiosity worth being promoted beyond Slovakia,” Katarína Kuľandová of the Civic Association of Workers in Trade and Tourism said. “If this is the only steam train in the world riding between the stands and pitch, it is a funny and nice attraction that could lure more tourists from abroad to the village,” she added.

Of the original 132 kilometres of the track, a mere 20 have been preserved. The train rides on three different tracks: the first, most popular, leads from Čierny Balog to the forest open air museum Vydrovo; the second crosses the Hrončianska Dolina valley; and the third leads from Čierny Balog to its hamlet, Dobroč, across the pitch. When the railway was laid in 1914 there was no football pitch; it was built later, as the village grew. In 1982 the operation of the railway stopped, until 1992 when it started to be used again. This track across the stadium, four kilometres long, was restored thanks to EU funds.

“The railway bed was preserved and only the upper part was made again,” head of the Čierny Hron Forest Railway, Aleš Bílek, specifies. At weekends, tourists can admire both the surrounding nature and the matches of the local football club Tatran. The standard operation of the railway stopped with the end of tourist season in September, but a special ride can be arranged. The football season, however, ended by mid-October, Pravda wrote. Thus, tourists will have to wait until next football season to enjoy the fullness of the Čierny Balog attraction.