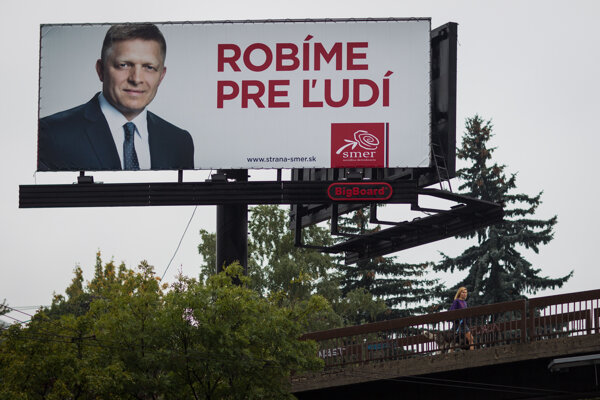 While the party boasts of the successes it achieved during the past three years, experts are rather critical and say that it only chose the facts that improve its image.

The video maps the achievements of Smer since regaining power in 2012. It describes the time as a period of rising unemployment, falling wages, and an ongoing fight against the economic crisis. Smer also mentions the fragmented opposition and its disputes, and shows the pictures of its billboards with the previous election motto saying “We work for people”, the Sme daily wrote.

One part of the video, for example, suggests that the Iveta Radičová government (2010-12) spent 31 percent of the money budgeted for 2012 already in March of that year. The fact is, however, that the Fico government also spends around one-third of the budget between January and March every year. One year it was even 33 percent, according to Sme.

Moreover, the party had to withdraw the video twice as the original contained the faces of several journalists. The media outlets subsequently asked the party to erase them from the footage.

“I think that a buzz around the video was intentional, because otherwise almost no one would be interested,” sociologist Pavel Haulík told Sme.

Advertisement experts are also critical of the video. With its form and content it is reminiscent of the propaganda used some 30 years ago, said Marian Timoracký of United Consultants marketing company, as reported by the Aktuality.sk website.

The main objective of the video is to mobilise Smer voters, that “the only risk for Smer today is that its supporters will stay at home as they will tell themselves that it has a considerable lead and the opposition is weak”, according to Haulík.

While the video will reassure Smer voters that it is a good choice to elect the party, it will also give right-wing voters reasons to not vote for them, adds Simona Bubánová from CD Creative Department agency.

Moreover, the video is too long and it is possible that undecided voters will not stay to watch it until the end, Michal Novota of Restartup, who focuses on PR and advertising, told Sme.