The Slovak cabinet finalised an agreement with the British carmaker on the plan to build a new plant in Slovakia. 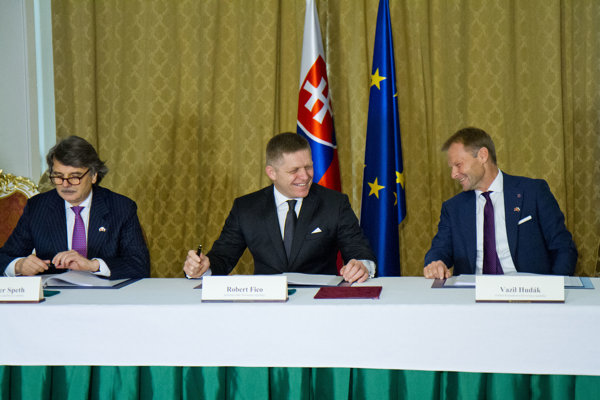 THE CLINCHING of an investment agreement between representatives of the Slovak government and the British carmaker Jaguar Land Rover (JLR) confirmed the arrival of a fourth carmaker to Slovakia. JLR, owned by the Indian Tata Group will build a new plant near Nitra in western Slovakia, investing £1 billion. The Slovak government will support it with investment stimuli of €130 million.

Ralf Speth, CEO of JLR and Slovak Prime Minister Robert Fico signed an agreement in Bratislava on December 11 between the company and the Slovak government to build the new plant near the city of Nitra.

“We are glad that Jaguar Land Rover has chosen Slovakia for its new world-class manufacturing facility,” said MP Fico after signing the agreement. “This decision shows that, with a stable and solid business environment, Slovakia is an attractive place for investors. And the marriage of Slovak craftsmanship and British engineering holds great promise.”

The new factory will complement JLR’s existing facilities in the UK, China, India and Brazil.

“Jaguar Land Rover is delighted today to welcome Slovakia into our family,” said Speth, as cited in the company’s press release.

JLR chose Slovakia over a number of other European countries, the United States and Mexico. JLR will be the fourth carmaker in Slovakia, while Volkswagen Slovakia, Kia Motors Slovakia and PSA Peugeot Citroën Slovakia have successful business here.

Slovakia has an established premium automotive sector, which represents 43 percent of the country’s overall industry. It has more than 300 suppliers in close proximity and an excellent logistics infrastructure; this confirmed our decision that this country was the ideal location, JLR wrote.

After signing the agreement PM Fico highlighted that JLR’s investment in Slovakia is the biggest investment on the European continent over the last seven years.

In terms of the stimuli, for which the carmaker will be entitled only after the process of ratification and notification by the European Commission, he said that even though the stimuli in the form of a subsidy for purchase of long-term tangible and intangible assets seems high, it is only 9 percent of the total investment.

The plant will manufacture a range of all-new aluminium Jaguar Land Rover vehicles while the carmaker has not specified exact models yet. It is anticipated that the first cars will come off the production line in late 2018. The factory will have an initial capacity of 150,000 vehicles potentially increasing to 300,000 during following years. Construction of the plant will start in 2016.

JLR plans to employ around 2,800 people in the new facility while thousands of jobs are expected to open with subcontractors.

The recruitment of potential employees of JLR has already begun and those interested can register via a survey prepared by the Central Office of Labour, Social Affairs and Family (ÚPSVaR) and the carmaker. It is expected that wages in JLR will exceed the regional average of about €830. The Slovak Finance Ministry has announced that JLR counts on average gross monthly wages of €1,225, the Pravda daily reported.

While details on what the carmaker would spend the investment stimuli of €130 million are not known, they do not contain any tax holiday. Within the agreement Slovakia and the town of Nitra promised to secure land for the plant, while works on a so-called strategic park are already underway. 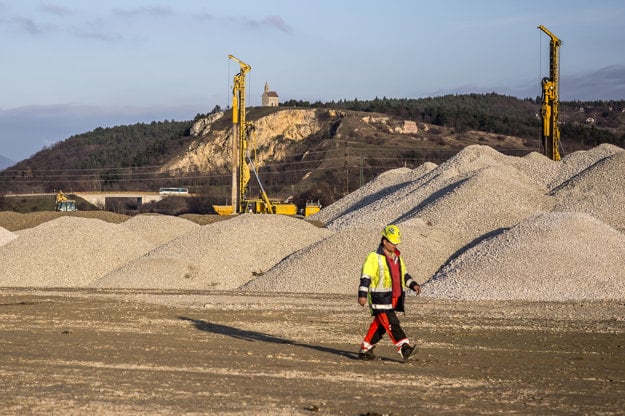 The land where the new Jaguar Land Rover plant will stand near Nitra. (Source: Sme )

Analysts believe that the investment will boost the economic growth of Slovakia as well as employment, but warn about concentrating too much on the automotive industry, pointing out that development in this sector is cyclic. Moreover, while Slovakia suffers from a high jobless rate, some companies also have problems filling their vacancies.

“Certainly this [the investment] will have a positive impact on employment as well as GDP,” said Ľubomír Koršňák, analyst with UniCredit Bank Czech Republic and Slovakia as cited by TASR, adding that the positive impacts will be visible already during the next two years as the investment would help construction companies, while a large portion of technologies will be imported.

The National Bank of Slovakia (NBS) has already calculated potential impacts of the arrival of the new carmaker to Slovakia with an initial effect of 0.3 percent of GDP in 2016 and 0.2 percent in 2017. As NBS based its estimate on the launch of production in 2019; for that year it estimated the effect at 0.8 percent. In total, it estimated that the average annual contribution would be 0.5 percent between 2018 and 2021.

Jana Glasová, analyst with Poštová Banka, pointed out that “the carmaker, similarly to other carmakers may encounter a problem whether it will find enough qualified employees. This is because Slovakia has been fighting with a problem of insufficient interconnection between the education system and the labour market, from which stems a lack of experts in various fields”.

Glasová also points to risks of too high concentration on the automotive industry when the existing three carmakers make up 17 percent of Slovakia’s total exports.

“Slovakia tops the world ranking in the number of cars manufactured per capita while it is not any secret that the automotive industry is a relatively cyclic sector sensitively responding to various swings in the world economy,” said Glasová as cited by TASR.

Koršňák shares some of these concerns, but said that given there are more carmakers in Slovakia, in case one of them faces problems others can balance declines in the market.

Economist Vladimír Baláž from the Institute for Forecasting of the Slovak Academy of Sciences recalled that cars manufactured in Slovakia sold well also during the global economic crisis arriving in 2008 when car sales in Europe declined. This is because carmakers in Slovakia manufacture small city cars as well as luxury SUVs.

Market watchers also point out that the British carmaker would draw British subcontractors to Slovakia and that as the carmaker is owned by the Tata concern from India, thanks to this investment Slovakia can get into the focus of Indian companies.

Slovakia already has three car manufacturers, Volkswagen Slovakia in Bratislava, Kia Motors Slovakia near Žilina in Teplička nad Váhom and PSA Peugeot Citroën Slovakia in Trnava. Last year the three carmakers manufactured more than 971,000 vehicles, according to the Slovak Automobile Industry Association (ZAP). That makes Slovakia the biggest car producer in the world based on per capita production while the estimate for 2015 exceeds one million cars manufactured.

ZAP estimates the share of the automotive industry at 13 percent of annual GDP while the share of Slovakia’s industrial production is as much as 43 percent. Automotive production employs directly about 80,000 while the total number of people employed in automotive and related sectors is 200,000.