In the Dark of Night 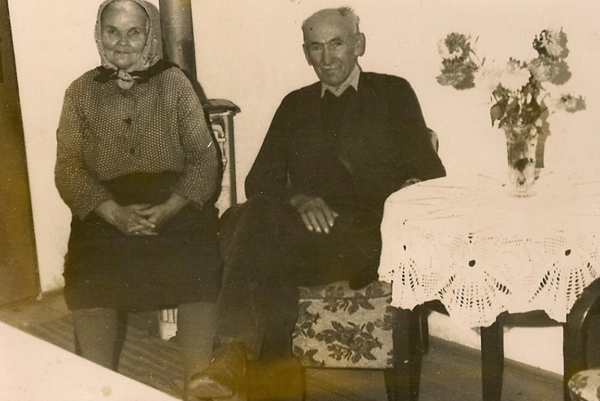 Štefan Kašša and his wife Mária are righteous among the nations. (Source: The Embassy of the State of Israel in Slovakia archive)
Font size:A-|A+6

The Weiss family lived in Hodruša where the father, Aaron Weiss, owned several stores. There were no other Jews in the town, therefore the Weiss family managed to survive with the father's business until a relatively late stage of the war. The business was then transferred to a friend, who was running it for the father. From the beginning of the persecutions, the Weiss family pretended to be Christian. Gabriel said in his testimony that he remembers attending services at the Church.

In 1944, after the outbreak of the Slovak uprising, they fled to the forests of Čierna Hora and Lučenec, their hometown.

Ariel Weiss would describe their decision to come back to their hometown as follows: "This was the last place the partisans operated. We went through a bombing of German aircrafts. The uprising was basically over. We found a free room with one of the villagers in which we lived temporarily. I can remember sitting in the room next to the window and looking outside. Suddenly, a funeral procession of one of the partisans passed by, and I saw my father's distant cousin passing behind the coffin. It was Moritz (can't recall the family name) from Zvolen. Then my father said that if Moritz walked after the crucifix, so could we. Then he found a villager with a horse and a carriage, and he took us back to Hodruša. The road passed through Banská Bystrica, where the Germans had settled. We managed to pass through the barricades. They sent father to the headquarters, and we received a confirmation to pass, I don't know how. We arrived to Hodruša - no Germans were there, but everybody knew who we were. Fortunately, they turned a blind eye to it.

We arrived to the same girl, Lonzi, in whose hands we had left the store. Her parents prepared for us a place in a cave above the village. There were beds and a stove. This was the entrance to a mine. The mine was blocked so people couldn't get in. We arrived during autumn. During the winter water started to drip from the ceiling, and we got wet.

Because of that there was another place arranged for us at the other side of the village by a different family - the Kašša family. They offered us a goat chalet where we took shelter. This was a house consisting of one room for the goat shepherd. We settled there for four months. It was the winter season, when the shepherd doesn’t stay there. While staying in the hut, the Kašša family delivered food to us. Štefan Kašša was coming to us every two or three days to bring food and water. We were lucky not to have been spotted. The house was hidden between the mountains. We were also in touch with the partisans that remained in the area – to whom my father provided food when he was still running his store. We were there until the front started to come closer."

The Weiss family spent the time entrenched in the hut. Mr. and Mrs. Weiss brought them food in the night. An SS soldier accommodated in the house of the Kašša family threatened the food supply. Gabriel described the events as follows: "I remember one night my father said we should go to get some milk from the Kašša family. Their house was situated at the end of the hillside. We approached the house from its left side in order to come in, but then my father pulled me back and I saw the boots of two SS people with a flashlight. They didn't see us and we managed to get away. We never went down again".

Mr. Kašša and his son Štefan used to bring food to the Weiss family. Unfortunately Mr. Kašša  was deported to the concentration camp near Linz in Austria. A cousin of Maria (Mrs. Kašša) serving with the Guardsmen threatened several times to report the family.

When the front came closer, the Weiss family went back to the mine. There, they found "a whole village" hiding inside the bunker. They stayed there one week until the Germans withdrew and the red army arrived. The Weiss family immigrated to Israel in 1949.

Mária and Štefan Kašša, both born in 1900, have been married for almost 60 years in Banská Hodruša. They raised son Štefan and daughters Margita and Mária. They lived honest, hardworking and modest lives. The Weiss family has expressed their endless gratitude on multiple occasions. A warm relationship between the rescuers and the rescued has preserved until the present day.

„We have remained in contact with the Kašša family; and Mária Pániková visited us in Israel. They call their family. Our families have been corresponding for years“, Gabriel Weiss said in his testimony.