Carnival, or Fašiangy, symbolises time of merriment and feasts

CARNIVAL, called Fašiangy in Slovakia, is the time between Epiphany (January 6) and the movable Tuesday before the Ash Wednesday. This year, the end fell on February 9. 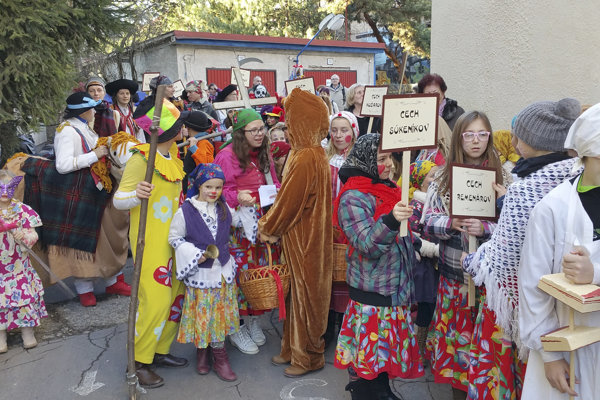 The roots of this tradition go back to Slavonic pagan predecessors of today’s Slovaks. In villages, Fašiangy was marked by processions with masks or “carolers” walking around local houses, while in towns, this time of year meant balls and dance events.

The end of Fašiangy depends on the date of Easter – a movable feast depending on the first full moon after the beginning of astronomical spring, falling on any Sunday between the end of March (in 2016, Easter Sunday is on March 27) to the end of April. Thus, Carnival season this year is very short, between January 6 and February 9.

The word Fašiangy comes from the old Germanic word ‘vast-schanc’, meaning “Ausschank des Fastentrunks”, or pouring of the fasting drink. Pouring the fasting drink symbolized the beginning of the 40 days of fasting during Lent, the time preceding Easter. This fasting was very strictly observed in the past, and so the last days of Fašiangy – in some places called “ostatky” (the remaining, last days), were a time of exuberant entertainment. From the era of Great Morava (9th-10th century), it was also called “mjasopust”, meaning letting go of a lot of meat. 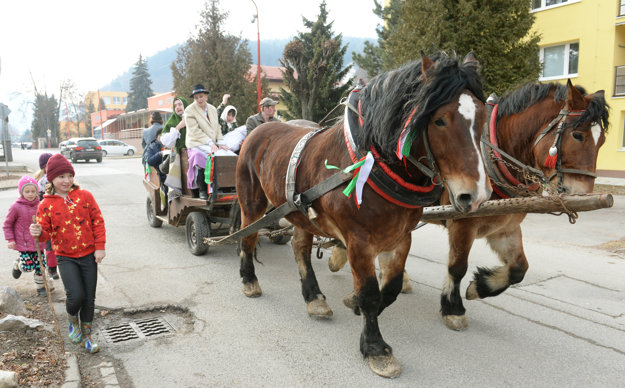 Depending on the year, Fašiangy can be short or long. People joked that during a short Carnival, even ugly girls were able to marry, which is connected to the predominate farming culture. Although farmers were in this period already preparing for spring chores, there was still not much to do, and as the processing of feathers and spinning were usually done, this was an ideal time for weddings. Then, weddings lasted for days and were a feast not just for family, but for the whole village. If a young man failed to marry during this brief period of time, he often had to wait a whole long year.

In a pre-Christian context and in the area of central Europe, Fašiangy was rather aimed at inviting spring with various magic rituals. Slavs, in those pagan and early-Christian times, used to celebrate this period also as “maslenice” (maslo means butter) which suggests that many substantial meals, rich in calories, were eaten. Slovaks’ ancestors ate modest meals but during Fašiangy, before fasting, they ate plenty of rich food. Traditional dishes were fánky (sweet squares filled with curd, jam, or walnuts), šišky (filled doughnuts), pampúchy (fried cakes), záviny (strudels) and various delicacies – products of pig-killing which usually also took place at this time of year. 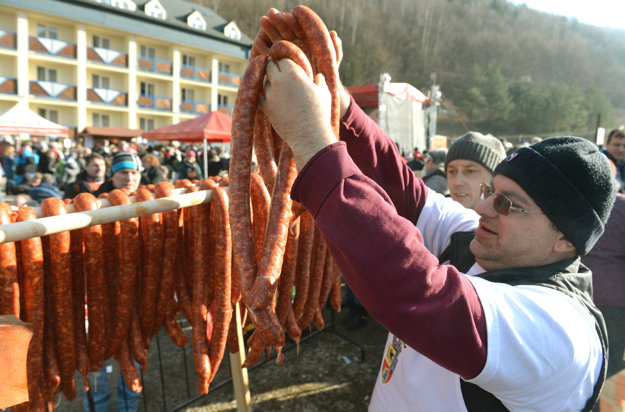 After the introduction of Christianity, Fašiangy got facelift; with rounds of masked villagers remaining as the only fragment. Masks are now mostly for fun, but in the past masks had a ritual meaning: those used for Carnival mostly represented animals and looked ghostly – Turoň (a bovine-like personage), bear or wolf – the more frightening, the better. Their role was to deter demons and evil ghosts. Even today, masked processions are part of Fašiangy in some Slovak regions; but nowadays, men mostly dress up as females, and vice versa, the TASR newswire wrote. 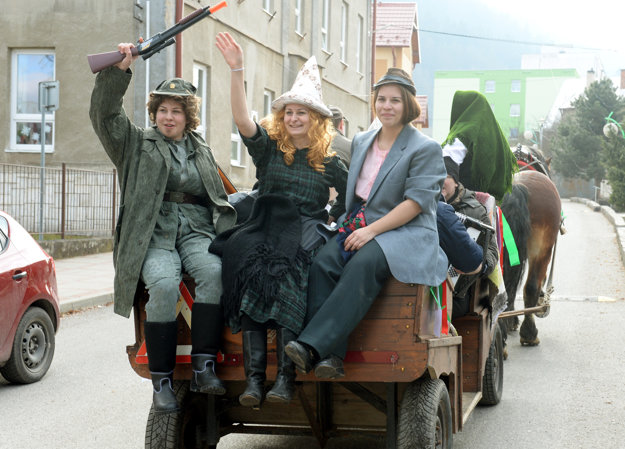 In the first half of the 20th century, the dressing up started including a soldier with a sable, on which farmers’ wives skewered donated meals. Each village had its own traditional well-wishing poems and masks inviting the inhabitants in each yard to dance. There was a local entertainer in each procession who managed it. Fašiangy culminated at a joint village event in a local pub where a feast was organised from the collected meals, with a hoedown. The “burial of the double bass”, involving people dressed as priest, organ-player, gravedigger, the instrument on a hearse and granny-weepers, symbolised that the merry time was over and in order to become more introspective for Lent. 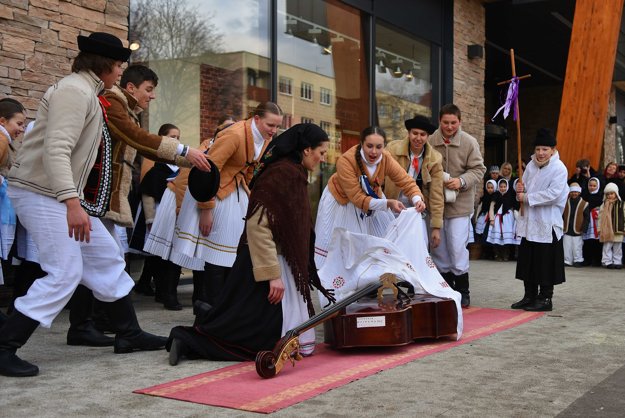 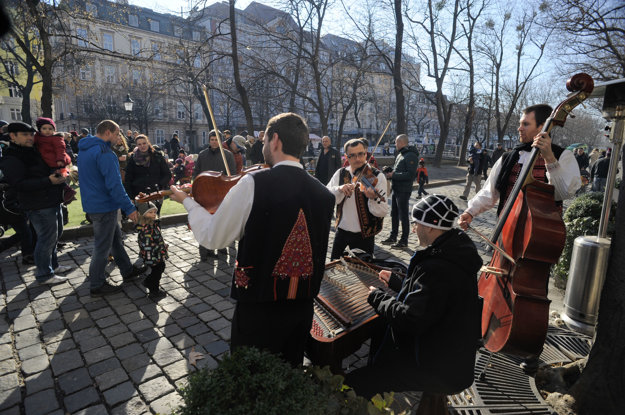 Currently, these traditions are being revived around Slovakia, more in the countryside than in cities (where balls have been preserved as a tradition, though). From villages, towns and cities in western Slovakia, through north and south all the way to the very east, the end of Fašiangy was marked by traditional processions, pig-killings and feasts, with some being more of a masked Carnival (e.g. on ice, in Prešov), and some of the traditional procession with re-enactment of old habits (in Chtelnica, Poprad, Prešov, Rimavská Sobota and elsewhere). In still others, like ski resort Plejsy-Krompach and Levoča, there were cooking contests of traditional Fašiangy cakes called pankušky. 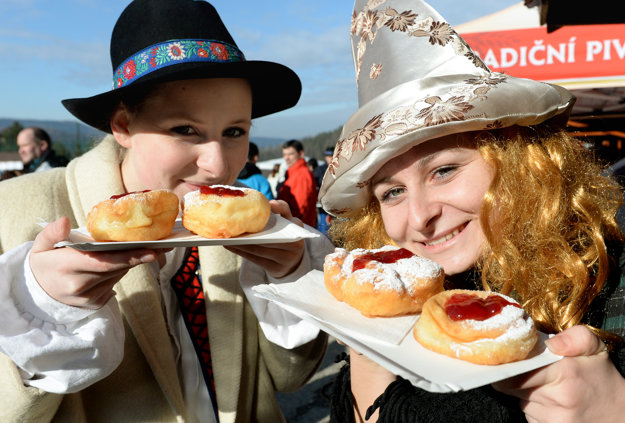 In the past, traditions of folk celebrations of Fašiangy virtually perished in the regions of Gemer and Malohont in south-eastern Slovakia, according to Stanislava Zvarová, a folklore specialist of the Gemer-Malohont Educational and Cultural Centre in Rimavská Sobota. However, folklore ensembles have still preserved them and currently they are even being revived again in villages and becoming more popular. “Fašiangy was more generally the time of fun and relaxation, as peoples still had some supplies of food, and a time of merriment and joy, Zvarová said. “Moreover, masks helped hide people’s identity, so even those who tended to be more serious during the rest of the year let it all hang out, sang and danced.“