But companies still need to promote it at schools 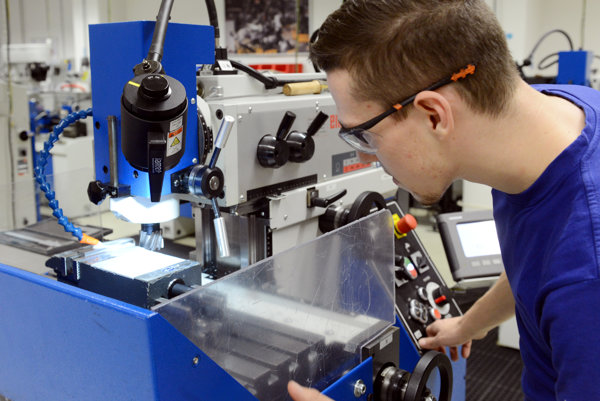 Matúš Lintner from a secondary vocational school in Zlaté Moravce (Nitra Region) started working for local company Miba Steeltec last school year. First he learned how to work with and handle materials, and this year he began working on machines.

“I like that everybody works on a different machine now and then we will switch them, so we will gradually train on all machines in the company,” Lintner told The Slovak Spectator.

He likes the course of education within which he spends one week at school and one week at the company. Moreover, thanks to this opportunity he has a chance to get a job at the firm also after graduating.

Lintner was among the first pupils who started studying under the new dual education rules within a pilot project Young Stars. The dual education scheme fully kicked off at Slovak schools in September 2015, with 422 students studying at posts provided by a total of 89 companies. This number is expected to increase next year as altogether 298 employers passed the registration process and offer a total of 2,763 places for practical training in 84 study programmes in 494 facilities.

Despite the expected growth in interest, employers still stress the dual education needs to be promoted among pupils and their parents, who need to see its benefits.

Every employer who wants to join the dual education needs to pass the registration process and receive the certificate confirming he is able to provide the education at his premises. The employers first have to submit an application to the professional organisations which oversee the process in individual sectors.

Information required for the application includes the name of the specialisation, the number of pupils companies want to take, the expected number of experts or instructors who will supervise the training, and the school year during which they want to carry out the training.

The application and the ability of employers to train pupils in their facilities are then checked by the committees established by professional organisations. After passing the process, the employer signs an agreement with the school.

The German-Slovak Chamber of Commerce (DSIHK) considers the registration process rather bureaucratic. Companies have to attach to their application several certificates from health insurance, social insurance, commercial register, tax office and criminal records.

“In order to get those, of course, a separate application from each institution is necessary and to wait for the responsive turnaround,” DSIHK spokesperson Markus Halt told The Slovak Spectator.

Also Martina Krišková, project manager of the commerce department at the Austrian Embassy to Slovakia, considers the process difficult. To help Austrian firms, the embassy tries to act as a coordinator and help them solve the problems.

Among the frequent questions companies ask is how many specialisations or students they should fill in the application. This is problematic for them as the applications have to be submitted one year before they actually launch the education, Krišková explained. Sometimes they do not know how many students they actually need and whether the number they ask for is appropriate.

Another problem is that the application can be submitted only once a year – by September 30.

“But if a company decides during the year it wants to join the programme or add another specialisation to its existing application during the year, it is not possible,” Krišková told The Slovak Spectator. “So the process is lengthy and inflexible.”

In Austria, the start of dual education is not strictly connected with the beginning of the school year as in Slovakia. If a company decides to open a place for a pupil as of January 1, the pupil starts dual education on this date, she explained.

“Nobody will help us with it,” said Jaroslav Holeček, vice-president of the Slovak Automotive Industry Association (ZAP) and chair of the council of employers overseeing dual education.

Krišková recalls the recruitment of pupils for their pilot project Young Stars, which started in September 2014. They were promoting it together with companies at primary schools, meeting headmasters, pupils and their parents. They took 33 pupils and opened two pilot classrooms. Though it was hard, the following year more people showed interest in participating in the project.

Also DSIHK joins the promotion process and informs pupils and their parents about the dual education benefits. They participate in educational fairs and parent-teacher conferences and organise open days for pupils in plants or employers show at public places, and promote the programme in social media and on websites.

“Work with the media is another important tool to promote dual vocational training,” Halt said.

Krišková, however, thinks that there is also space on the national level for some institutions and also the Education Ministry to promote dual education and help companies in regions.