Ministries have been allocated, names still not officially announced

After presenting their programme priorities, the four parties of the coalition have agreed on the composition of the government. Robert Fico is reportedly to stay on as prime minister, the Health Ministry remains problematic. 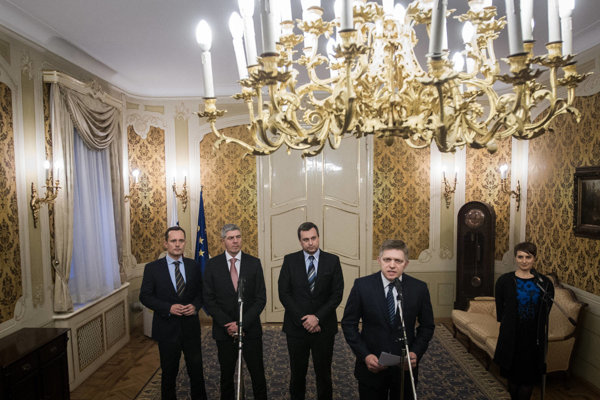 THE FIVE-HOUR long meeting at the Government’s Office on March 16 resulted in the division of ministries among the coalition parties, but the names of the ministers have not yet been officially announced. The media are already speculating about the names of those who might fill the ministerial chairs in the new government.

Robert Fico, who is most likely to be the prime minister in the new government, is scheduled to meet President Andrej Kiska early on Thursday morning, as he is leaving for Brussels at noon on the same day. He will probably submit the proposed priorities and agreement among the four partners in the future ruling coalition. After accepting the proposal, the president will convene the initial parliamentary session of the new election term.

The parties agreed that the Slovak National Party (SNS) will fill the post of the speaker of parliament, while the three remaining coalition partners, Smer, Most-Hid, and Siet, will each get one post of deputy speaker. The remaining fourth deputy speaker post will be filled by the opposition.

The parties of the emerging coalition agreed to secure cross-control at the ministries, which means that at each individual ministry, the state secretary (deputy minister) will be from a different party than the minister. The ministerial posts are to be divided as follows:

Smer (who will nominate the prime minister), will control the ministries of the interior, finance, foreign affairs, economy, culture, labour, and health care. Smer will also fill the post of deputy prime minister for investments.

SNS will have their ministers in the defence, education, and agriculture departments.

Most-Hid will fill the posts of justice and environment ministers, while Siet will get one ministerial chair, transport.

The agreement on the division of the chairs took slightly longer than expected, reportedly because the parties had difficulties agreeing who should control the health ministry. Health care is generally considered to be one of the most ailing sectors in Slovakia. Towards the end of Smer’s outgoing government, several scandals surfaced in the health care sector and the media have been reporting on what the Sme daily labeled a health care octopus: a network of people controlling financial flows in the sector, connected through nepotism and corruption.

Another sector that was in turmoil towards the end of Fico’s second term in office is education. In the new cabinet, the minister for education is likely to be one of the nationalists from SNS. This party has also controlled the ministry in the past, under the first government of Robert Fico from 2006-2010. Political analyst Miroslav Kusy called the decision to assign education to SNS bad news.

“There is a risk that it will get some nationalist zip,” he said as quoted by Sme.

Although the four partners of the new coalition remained tight-lipped about the actual names of the people who will be assigned to the ministries, some names appeared in media reports during Wednesday.

Most-Hid’s ministers are expected to be Lucia Žitňanská, who would return to the chair of justice minister that she last held during the brief term of Iveta Radičová’s government, and Lázsló Solymos who is likely to take over at the environment department.

Commentators and observers have mostly agreed in the past few days as the ruling coalition was taking shape, that Most-Híd’s Béla Bugár and Sieť’s Radoslav Procházka would make their participation in the government conditional on Robert Fico not being the prime minister and Robert Kaliňák not being the interior minister. But media reports suggest that both Fico and Kaliňák are likely to retain their posts from the two previous governments led by Fico.

Finance Minister Peter Kažimír is also expected to stay put, as are Labour Minister Ján Richter and Foreign Minister Miroslav Lajćák. Lajčák, whose name has also been mentioned as a contender for the prime minister's post, is one of Slovakia’s most experienced diplomats and his ministry will play a major role during Slovakia’s EU presidency in the second half of this year, which is why he is expected to retain his previous role.

The education ministry is expected to be led by Ľudovít Hajduk, the current vice-dean at the private Paneuropean University. The SNS minister in agriculture may well be Vladimir Chovan, who has previously served in this post for a brief time, as a HZDS nominee under the first government of Robert Fico.

Sieť’s only minister could, according to Sme, be Róbert Auxt, the party’s expert on finance. Auxt is not among the 10 MPs who advanced to the parliament on the slate of Siet. If one of the MPs took an executive post, their replacement would be Zuzana Zimenová, who has already declared she did not agree with Sieť joining a government with Smer, and that she would not support it in the parliament. For now, seven out of the 10 originally elected Sieť MPs maintain their support for the party and the emerging government.