Mikloš set to get a seat in Ukrainian government

A former top reformist in Slovakia, now advisor to the Ukrainian government, could become Ukraine’s next finance minister even without losing his Slovak passport, depending on the outcome of coalition talks. 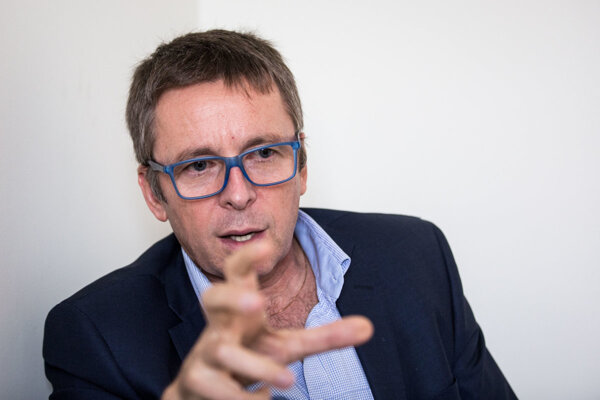 SLOVAKIA’s one-time economic reform guru is being considered for the post of finance minister in the emerging Ukrainian government.

Ivan Mikloš confirmed in late March that he had agreed to take the governmental post in Ukraine under the condition that he would retain his Slovak passport. His nomination is part of the coalition talks that were launched in the Ukrainian parliament on March 29, that see Volodymyr Groysman as the frontrunner for the prime-ministerial post in the potential new government.

Groysman, who reportedly wants to compose his cabinet primarily of experts and professionals, already suggested he is willing to have Mikloš as his finance minister. That could mean the parliament would need to change legislation to allow a foreigner to be part of the cabinet.

Mikloš has confirmed to the Slovak media that he was willing to accept the offer of Groysman if it comes to that. Beside his programme-related conditions he also insists on keeping his Slovak passport, he said in an interview for the Sme daily.

The parents of Ivan Mikloš, born in Svidník, both belonged to the Ruthenian minority living in the east of Slovakia. In the 2011 census he stated his nationality as Ruthenian as well, for the first time, he admitted in an interview for the Týžden weekly back then. Additionally he said that he understood Ukrainian, which is very similar to the Ruthenian language, but could not speak it.

Remaining Slovak citizen is however just one of the conditions Mikloš admitted to. First and foremost, he claims he must be able to identify with the programme of the new government if he is to be its finance minister, he said for Sme. Other things that would be important for him to decide about the position include the trust between himself and the new prime minister, as well as the personnel composition of the new cabinet.

“It matters for the government to endorse reforms also from the personnel point of view,” Mikloš told Sme.

The face of reforms

In Slovakia, Mikloš is viewed as the face of the economic transformation that allowed the country to enter the OECD, the EU, and later the eurozone. His name is connected for instance with the introduction of the 19-percent flat tax rate, which was part of his extensive tax reform that is considered to have turned Slovakia into the “Tatra tiger”, as the country was labeled under the second government of Mikuláš Dzurinda in 2002-2006.

For his achievements in the public sector he was awarded the Euromoney magazine prize “Minister of Finance of the Year 2004”. In the same year, Mikloš was selected the Best Minister of Finance of European developing economies, an award by the Emerging Markets magazine, and he was also recognised as the top business reformer by the World Bank´s Doing Business report.

Mikloš, who was born in 1960, gradually disappeared from Slovak political life after the Slovak Democratic and Christian Union (SDKU), the party that nominated him twice for the post of the finance minister and once for the post of the deputy PM for economics, was ousted to parliamentary opposition following the landslide victory of Smer and its leader Robert Fico in the 2012 early election. The SDKÚ, which over the previous decade was considered the leading party on the right, saw its support plunge to 6.09 percent in the March 10, 2012, general election, barely above the 5-percent threshold to enter parliament.

In that election Mikloš made it to the parliament as an MP, but halfway through the term, in June 2014, left the party along with its former chairman and prime minister Mikuláš Dzurinda.

SDKÚ no longer made it to parliament in the 2016 elections, also due to a series of departures of its MPs before and after Mikloš and Dzurinda. The party suffered losses also due to its links with the infamous Gorilla file, a lengthy document that purports to describe an operation conducted by the Slovak Information Service (SIS), the country’s main intelligence agency, which collected information about the influence of the Penta financial group on senior Slovak politicians between 2005 and 2006 under the second government of Dzurinda.

In 2015, Mikloš accepted the offer to work as an advisor to two Ukrainian cabinet members: the finance minister and the economy minister.

Ukraine is more of a challenge

Mikloš said for Sme that he considers the post of the Ukrainian finance minister even more of a challenge than the same post in Slovakia in 2002. The current state of affairs in Ukraine is rather comparable with what the first government of Dzurinda had to deal with in 1998 when it replaced the garniture of Vladimír Mečiar.

“Back then the situation in Slovakia was really bad,” he said in the interview with Sme.

While Ukraine still struggles with war, it has also experienced significant progress since the Maidan revolution, according to Mikloš. In his view, Ukraine has great potential and definitely has a chance to go Slovakia’s way.

“If it made really deep and consistent reforms, it can really be a successful country,” Mikloš said.

Who is Ivan Mikloš?

Ivan Mikloš was born on June 2, 1960 in Svidník and studied at the University of Economics in Bratislava where he specialised in macroeconomics and economic planning. Later he studied at the London School of Economics, focusing on the experiences of post-communist countries with economic transformation.

From 1983 until 1990 he was a member of the faculty of the University of Economics in Bratislava. After the fall of communism, in 1990 he served as the adviser to the deputy prime minister for economic reform and in 1991 became the director of the section of economic and social policy of the Government Office. Mikloš served as the minister of privatisation in 1991 and 1992.

In 1992 he became the executive director of M.E.S.A. 10 – the Centre for Economic and Social Analyses. In 1994 – 1998 he taught at Trnava University. In October 1997 he was elected in the parliament as a member of the Board of the National Property Fund, a post which he resigned from in September 1998.

In 1992 – 1993 Mikloš served as the first deputy chairman of the Civic Democratic Union, later he became the member of the Democratic Party (DS) which in 1997 merged with the Slovak Democratic Coalition (SDK) led by Mikuláš Dzurinda.

SDK was transformed into the Slovak Democratic and Christian Union (SDKÚ) in April 2001 and Mikloš has served as its vice-chairman since then.

Mikloš was a member of both cabinets led by Mikuláš Dzurinda in 1998 – 2006: in 1998 – 2002 he served as the deputy prime minister for economics and from June until October 2002 as the minister of transportation, posts and telecommunications. In Dzurinda’s second term, 2002 – 2006 Mikloš was the deputy prime minister and the finance minister. In 2006, Mikloš returned to the parliament as an MP and served as a member of the committee for finances, budget and currency.

In the 2010 parliamentary election he was slated as the number two candidate for SDKÚ, was elected MP, and in the subsequent four-party coalition negotiations was chosen to be one of the government’s deputy prime ministers and finance minister.