A female Muslim with child was attacked in Bratislava

Slovak police investigate the case of a Muslim woman robbed and attacked in downtown Bratislava on the same day as terrorist attacks in Brussels, March 22. 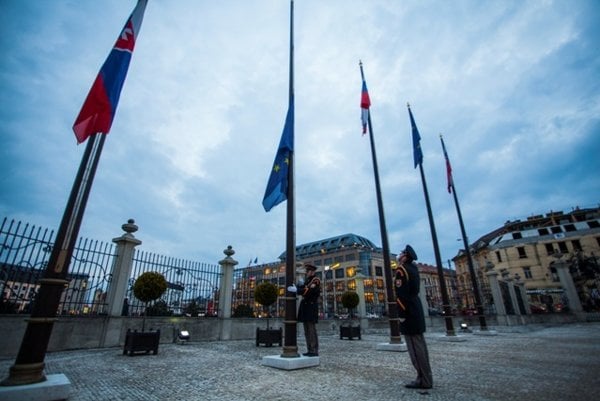 The incident took place close to the Presidential Palace in Hodžovo Square. (Here, flags are lowered as tribute to the victims of Brussels’ attack.) (Source: TASR)
Font size:A-|A+  Comments disabled

The woman travelled in Hodžovo Square with her son, aged 3, and she wanted to take bus No. 83 to the Main (railway) Station at the stop near the Presidential Palace when an unknown man tried to take off her veil and pulled her handbag. When she looked back, she saw he took her purse and gave it to the woman standing next to him, the Denník N on April 2 quoted the web of the Islamic Foundation in Slovakia, islamonline.sk.

“Unlike ordinary thieves, they did not even try to conceal their deed or run away,” the web writes. Instead, they started shouting at her and cursing, while she understood only words like “black”, “dirty”, “terrorist” and “Muslim”. The woman, coming from an African country, has been living in Slovakia for two years. The woman, who wants her name to stay undisclosed, contacted the Islamic foundation.

She says, moreover, that she shouted for help but, although it was around 15:30, passersby and passengers on the bus did not react. The bus driver asked her whether she wanted to travel, or preferred to stay.  She returned to the site of the attack and called police who took her to police station.

Police are now investigating the case, although it is not clear as a crime or as a mere misdemeanour. As it is already three weeks old, police will comment on the case beginning this week when more details are confirmed.

The woman had already been attacked once, also in Bratislava, following the terrorist attack on Charlie Hebdo in Paris, Denník N wrote.