EU presidency is right around the corner 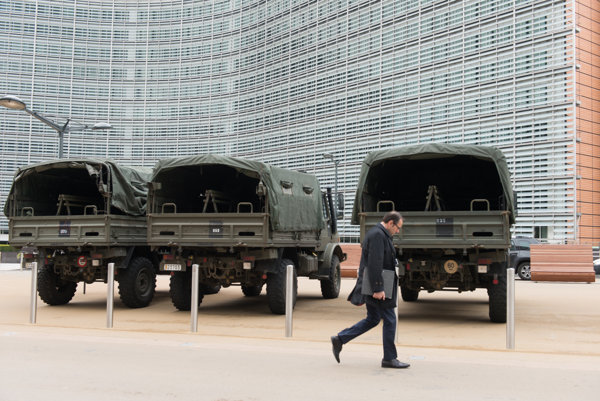 Security will be one of key topics of the EU presidency. (Source: Jana Liptáková)
Font size:A-|A+

SLOVAKIA will take over the presidency of the Council of the European Union on July 1 amid a migration crisis, terrorist attacks in Brussels and the UK’s EU referendum. The country’s main task will be to be the honest broker, leaders say.

“With what success a country handles the EU presidency depends in a certain extent on how much it manages to distance itself from its national priorities,” European Commissioner for Energy Union Maroš Šefčovič said on April 5 in Brussels. “It must play the role of an honest broker, with a goal to find a consensus and achieve an agreement.”

Slovak officials have long worked on the programme for its presidency, along with two other countries in the so-called trio, the Netherlands which presides over the EU now and Malta which will take over the presidency from Slovakia. The priorities include employment, competitiveness, the single market, protection of citizens and the energy union. But already now it is clear that the migration crisis, a revision of the Dublin regulations and the fight against terrorism will be high on the agenda too. 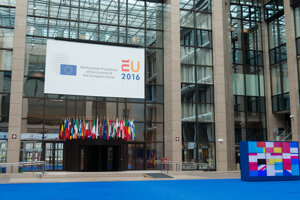 Within the debate of possible solutions to the migration crisis there is no united view among diplomats whether the negative stance of Slovakia to EU quotas to redistribute migrants voiced by its Prime Minister Robert Fico and the lawsuit Slovakia filed against the EU would have an impact on the presidency. One of the views is that Fico’s rhetoric was coloured by the election campaign and that the lawsuit is an issue separate from the presidency. And though ministers of the presiding country will be busy chairing ministerial councils, there is no such body to be chaired by the prime minister. This is in contrast to the role the prime minister of the presiding country played before the Treaty of Lisbon took effect in 2009.

High on the agenda will be also the annual EU budget for 2017 that is always debated during the second half of the year. Peter Javorčík, the head of the Permanent Representation of Slovakia to the EU in Brussels said that during even numbered years since 2010 there were always problems when agreeing over the budget.

“We will try to break this pattern,” said Javorčík.

Another important topic may be the so-called mid-term review of the seven-year financial framework for the EU lasting from 2014 until 2020.

“This will be certainly an important topic, but we are waiting for a draft to be prepared by the European Commission,” said Javorčík. “So if it will be on the table somewhere in July, which is also possible, it will be a strong agenda for the presidency.”

But if the EC submits the evaluation only in late 2016, because its duty is to submit the document by the end of 2016, then Slovakia will do more or less introductory discussions and the evaluation would be closed only during the Malta presidency, he added.

Nevertheless, the final programme will depend on the situation in which the European Union will be at the start of the presidency. Thus apart from topics that are predictable or long-planned, the agenda with which Slovakia will deal during its presidency will reflect developments, including the results of the UK’s EU referendum. On June 23, one week ahead of the start of the Slovak presidency, UK voters will vote on whether to leave the EU.

As the latest survey published in mid April showed that 45 percent of people in the UK now want to leave the EU compared to just 42 percent who want to remain, the Slovak presidency may have to deal with a Brexit scenario.

“If the answer is ‘Leave’ the whole agenda will strongly focus on how we [the EU] will handle this new phenomenon,” Javorčík said, adding that the mechanism for Brexit is set in the article 50 of the Treaty of Lisbon but only very generally. “To say it in a very simplified way, it says that a solution [for the departure of a country from the EU] should be found within two years.”

This means that it will be Slovakia that as a presiding country will have to start this process. But according to Javorčík, the European institutions are set for a positive development and that the working hypothesis is that the UK will remain in the EU.

Ivan Štefanec, a member of the European Parliament (EP) for the Christian Democratic Movement and a member of the UK advisory group, hopes the UK remains, referring to this as to Brimain and not Brexit.

“We respect that it will be the free decision of UK citizens but the basic question is whether the UK would be stronger or weaker without the EU and for me the answer is that the EU is stronger with UK and that UK is stronger with the EU,” Štefanec told The Slovak Spectator, adding that the British economy is the second strongest in the EU and that the referendum may be a political signal about the adhesiveness of Europe.

In terms of the programme and priorities on which Slovakia should focus Štefanec would like to see that economic issues are not forgotten during emotional debates about the migration crisis.

“To keep the Schengen zone under the current situation is not a small ambition,” said Štefanec, recalling that six member countries are closing their borders.

It will be Slovakia that will pay the highest costs because as much as 72 percent of Slovakia’s exports head to EU countries. This is the biggest share within the EU. Apart from economic impacts the fall of the Schengen would be a bad signal.

“It will be a kind of disintegration signal,” said Štefanec.

Experts say that the worst thing a presiding country can do is to push for self-interested priorities while they stress that they are often smaller countries, contrary to big countries, that manage to push important issues forward as they are perceived as being driven less by their own interests.

“The primary task is to be an honest broker, thus in principle it should not matter which country holds this position,” Javorčík told The Slovak Spectator. “Nevertheless, it is natural that each country has its priorities and some relations to some questions that are solved on the European level.”

Here he used extension of the EU or the Eastern Partnership as an example, while the latter is a long-term priority of the foreign policy of Slovakia and he thinks that “we can speak to this because we know these countries better, we have built much stronger relations and thus maybe we will be able to communicate with them better and move this process forward more than another country”.

So Slovakia will also try to table questions and priorities that the presidency can move forward, Javorčík continued.

“Thus the added value of the presidency is that in certain things it is possible to put greater stress on some European questions during six months of the presidency,” he added. “But I would like not to overestimate it as about 85 percent of the agenda of the presidency is set regardless whether Slovakia or the Netherlands holds this position. Simply the large vessel of the European integration is set in a certain direction and maybe in the rest we can push on one question a little more and some others a little less.”

While each presidency of a country is being evaluated after it is over, it is difficult to quantify what is a successful presidency, according to Javorčík. Maybe it is possible to say afterwards how many agreements were achieved within 28 member countries or with the European Parliament, or what progress was achieved, for example, when negotiating the single digital market.

“But maybe more important is the subjective evaluation by people and this means whether the presiding country managed the role of the honest broker, whether the atmosphere during meetings and negotiations in Brussels was fair, whether we managed to create a proper atmosphere to move forward goals which the EU and we have in common,” said Javorčík. “Thus it is often rather what a subjective impression or trace the presiding country leaves. We will do our utmost for the impression from our presidency to be good.”