Fico to stay in hospital until end of week

Prime Minister Robert Fico will stay hospitalised in the National Institute of Cardiovascular Diseases (NÚSCH) until the end of this week.

Doctors will examine and test him, NÚSCH spokeswoman Dobroslava Krajačičová informed the TASR newswire on April 18. His doctors did not want to specify his diagnosis, as the premier’s family asked them not to do so. Fico allegedly had acute coronary syndrome, the Denník N wrote on April 15. His health condition is not worsening, though, the general manager of NÚSCH Mongi Msolly told the Aktuality.sk news website.

The prime minister should have presented the government’s programme manifesto in Parliament on April 18, asking the House to approve it and to express confidence in the cabinet that stems form the March election. Asked whether doctors did not recommend Fico going to parliament, Msolly said for Aktuality.sk that PM decided the dilemma for himself.

In parliament, Fico should be substituted by Deputy Prime Minister Peter Pellegrini. “The prime minister further executes his function and closely cooperates with people around him,” his spokeswoman Beatrice Szabóová informed the SITA newswire, adding that his working schedule is scrapped, however, until the end of this week.

Fico has been hospitalised since April 14 when he cancelled his first foreign visit of this term to the Czech Republic. Later this week, he was supposed to also travel to Warsaw and Budapest. 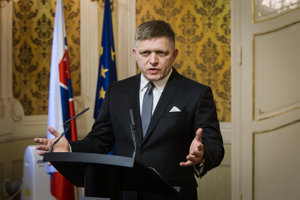 His foreign duties have been postponed and two deputy prime ministers have stepped in to executing domestic roles and duties. In the current case, it will be Deputy Prime Minister for Investments Peter Pellegrini (also from the ruling Smer party) who will take over.

Unlike other political figures, for example US President Barack Obama who usually publishes information about his health condition following his regular medical examination, Slovak PM Robert Fico has never does so. It should be a natural part of democracy that a person we elect reveals such things, says expert in protocol Jaroím Antal. This is not the case of Fico, through, the Sme daily wrote. The public knows only about his previous problems with a cervical spine, mostly thanks to the caricature by Martin Shooty Šútovec, whom Fico later sued. Another item of information known to the public pertains to the surgery Fico underwent after problems with his Achilles tendon. While ordinary people are protected by the law from revealing the information about their health condition, Fico is a public official, says lawyer Jozef Vozár from the Slovak Academy of Sciences (SAV). Though he does not have to do it immediately, he should certainly inform the public after he recovers, Vozár added.